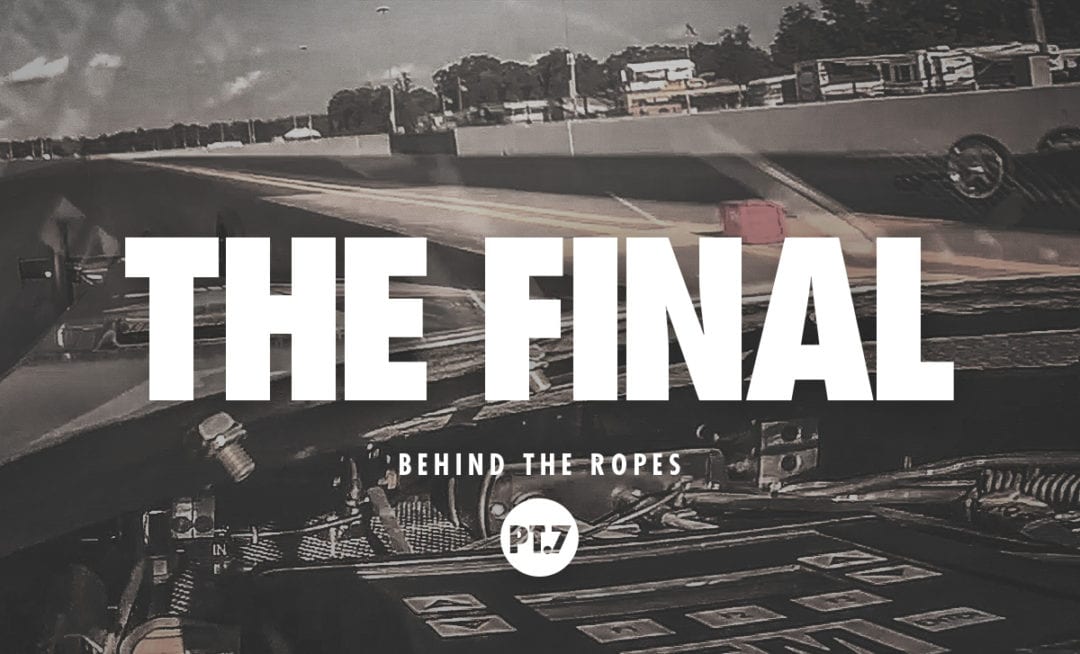 The following is the final installment of a 7-part behind the scenes series that takes a look at the inner workings of an upstart NHRA A/Fuel dragster operation at the 2017 NHRA Carolina Nationals.

The final round at this race was a blur. By the time we pulled back into the pits after defeating Alan Bradshaw, Cowie’s guys were already well on their way towards putting a new motor in their car and the NHRA was driving by asking how quickly we could be back up in the lanes. For how new we are as a team, I can’t overemphasize how proud I am of the way the team performed under these circumstances in back-to-back rounds.

Chase Copeland was running around like a mad man tag teaming putting a clutch in the car with me, downloading and analyzing the data from the previous run, and making tuning calls. Kyle, Clay Copeland, and Cory Cox were in unison, meticulously and efficiently servicing the engine. J.P. Gutierrez was lending a hand anywhere possible and my dad and Doug Kotter were floating around taking care of jobs that allowed the rest of the team to focus on the tasks at hand. It was the ultimate team effort.

Despite having little time to make adjustments between rounds, and having no prior data to pull from, we continued to make incremental performance gains throughout the weekend. This was encouraging for our team, but we knew these small performance advancements would need to make a quantum leap forward if we wanted to run with the big dogs in the final round.

In what felt like no more than 10 minutes after crossing the finish line in the semifinals, we were back in the left lane once again firing our car up against Shawn Cowie with a Wally on the line. As far as the pre-run process was concerned, things were pretty par for the course on this run. We intentionally did a shorter burnout in an effort to not put a lot of heat in an already warm clutch, but the motor refused to cooperate at any point during the trimming processes. As we did every other time during the weekend, though, we adapted to the circumstances and we got it rolled into the beams to give ourselves a shot to win the race.

At this point, everything was honestly routine and we were just rolling with the punches. But, there’s no sense beating around the bush from here.

When the tree flashed, I missed it.

In the final round, with everything on the line, in our first National Event as car owners, I cut my worst light ever in eliminations. I was .047, and Shawn opened the door for us to steal a victory from him with a .132 light and I wasn’t good enough.

The car? Best run we’ve ever made with it to this point. Our 5.39 was our first time dipping into the .30s and it was a major success from a mechanical standpoint.

The car left hard and never really tried to make a move during the run. I saw Shawn’s nose come into my vision around the 330’ cone, and he never went away from there. We were able to close the gap on him enough through the finish line that I wasn’t sure if we won or lost the race. I didn’t see either win light turn on and it took until I saw the Safety Safari waving him towards the FOX crew after we turned off the track.

You don’t forget coming around the corner and hearing someone banging on their car, hollering when they’re handed a Wally. That type of elation after being defeated pierces straight through you.

I managed to walk over and shake Shawn’s hand to congratulate him on the top end, but exhaustion set in from there. Going back to the consecutive all-nighters that it took just to be able to get on the road back on Wednesday, battling the trials and tribulations of the weekend, and then the frustration of coming up 19-thousandths of a second short in the final round; I was spent. 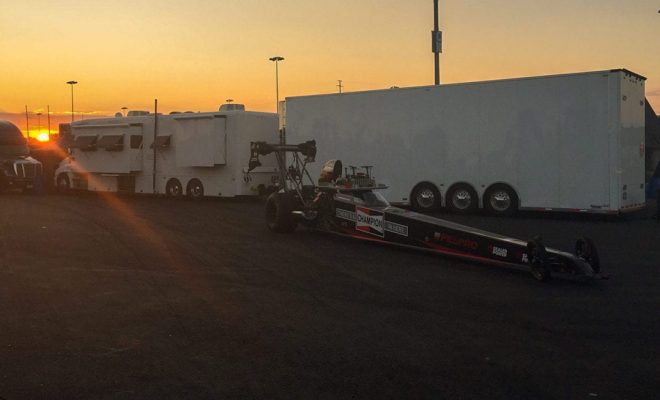 We’re still trying to claw our way up the ladder in all aspects of team ownership to be recognized as contenders in the sport. To show you where we’re at in the grand scheme of things, I think the following paints a pretty good picture. Upon returning to the pits after the final, the first thing I did was grab two milk crates out of the trailer and I walked through the nitro pits to see if I could collect anyone’s throw-away clutch discs and floaters so that we could build inventory for the future. I can tell you that we’re still flying under the radar because 20 minutes after finishing as National Event runner-ups, the majority of teams thought I was a fan looking for souvenirs.

Kyle and I appreciate you taking the time to work your way through this lengthy 7-part series with us. We hope that each entry helped to further paint a picture of just how physically and mentally grueling each race weekend can be. We tried our best to be extremely transparent in each post by highlighting our growing pains as a new team and the lessons we continue to learn along the way. Race weekends are not all win lights and profiling for the cameras; despite the numerous challenges we faced, we worked together to learn and adapt on the fly, which is what makes racing so rewarding when you can overcome that adversity.

I don’t know if I’ll ever fully stop wondering “what if” about the outcome. Definitely not this offseason, at least. Maybe it’s because it was the last run of the year, maybe it’s because this was the first time I’ve ever lost a race where it could have been won with a better reaction time, or maybe it’s just because I hate losing that bad, but I’ve re-watched that run every single day since we left track and it still stings just as bad.

We didn’t start our own operation with the hopes that in two or three years we would be in a position to win a race. We took the steps and partnered with the people that we needed to in order to be contenders the first time we pulled through the gates. Listen, we caught some breaks throughout the weekend, but we were prepared to capitalize on a chance to win when it presented itself…and we did. We’ve had a hell of a start, now it’s time to finish.

Who knows what the arrangements will be for the future, but I’m fortunate that Kyle gave me the opportunity to wheel the car out of the gate. MBR is not just an acronym for a team name that’s derived through growing up as family — it’s the true definition of a partnership and a commitment to doing things the right way. I want to say it’s 50/50, but there are a lot of areas that it leans more towards his side, and I wouldn’t be writing about the experience of driving a nitro car if we didn’t claw our way through the ranks together.

MBR is preparing to return to the track with an expanded schedule in 2018. Stay up to date with the team’s latest updates by “liking” Michalek Brothers Racing on Facebook and following @MichalekRacing on Instagram and Twitter.