The following is the second installment of a 7-part behind the scenes series that takes a look at the inner workings of an upstart NHRA A/fuel dragster operation at the 2017 NHRA Carolina Nationals.

Before we get too deep into the details of what happened in Q2, let me say this: In my 13 years of racing, whether as a crew member or a driver, if there has ever been one consistent truth, it’s that if we make a planned early shut-off run, or if we sit out a qualifying session, our next run is almost guaranteed to be a throw away. It’s happened nearly every single time I’ve been a part of that situation.

Going into Q2, I was happy to get back into more of a normal routine. Although we only went to 330’ in Q1, we went faster than a handful of cars that smoked the tires at the hit allowing us to make a run later in the pack during Q2. We lined up against Mia Tedesco, who I made my first side-by-side run against in my Top Alcohol Dragster debut at this track back in 2014. Mia is a great competitor and we really enjoy being at the track with her team.

I drive with my chinstrap stupid tight. You can see in the video that I fully max out the available real estate on the strap. I prefer having a downward tilt to my helmet when the car is at idle that eventually gets leveled out from the force of the car under acceleration. With that said, though, it’s super uncomfortable and I wait until the last minute to pull it tight to minimize the amount of time that I have to sit that way in the car. 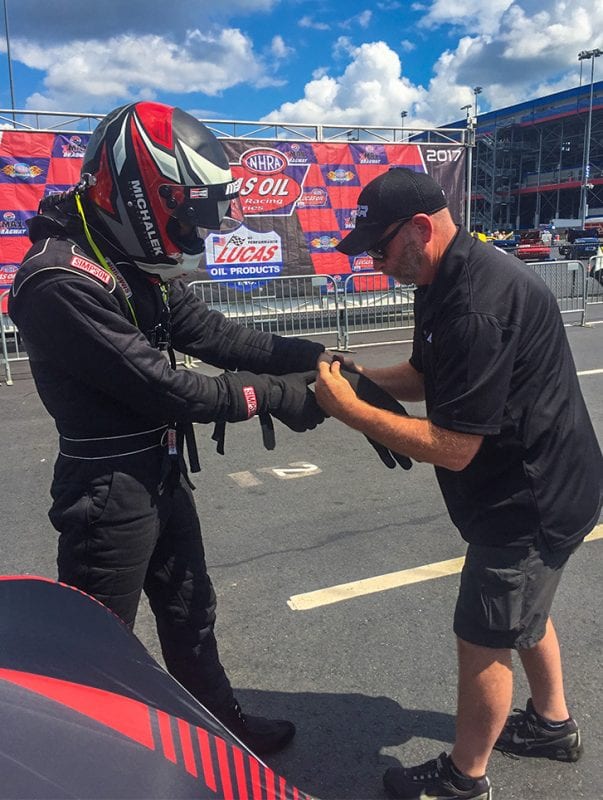 From the jump, things weren’t good for us on this run. As soon as the car started, the vibration was the worst it’s ever been. There was smoke coming from the clutch can at various times and the front wing started shaking when I let the clutch out to start backing up (more on that in a future post). This was also the only time I’ve ever had any trouble getting this car to go in and out of reverse during the run, which as you’ll see at the end of the video prompted me to question whether or not we ever adjusted the clutch linkage during the thrash in between Q1 and Q2. This run, however, was one of a few during the weekend where the car cooperated when we tried trimming the fuel and we were able to start building some heat in the motor after the burnout.

Upon getting back to the starting line we noticed that there was a significant amount of fuel leaking from the header bank on the left side of the car. The headers we run have been on the car for as long as we know and the flanges definitely have some warping to them. J.P. Gutierrez and Clay Copeland did their best to keep the track and the rear tire as dry as possible, but it was nearly impossible to keep up with.

When it comes time to stage the car I try to get right in, and if I’m not in first, I try to get in right after the other driver so that I don’t hold them up. On this run, however, as soon as I put the car on the high side and tried to bump it in, it just wouldn’t move. You can see in the video that I try to bump it in so that I could stage it as shallow as possible at first, and then I start increasing the amount of time that I’m off the brakes more and more because it just wasn’t rolling forward and I didn’t want to hang Mia out to dry. By the time the car finally started moving, it got some momentum and I took a pretty big chunk getting in the beams, which obviously is not ideal when looking to run the lowest elapsed time possible.

The biggest issue with not being able to get the car staged in all this, though, was that with each passing millisecond, more and more fuel was accumulating in front of the left rear tire with the fuel pump all the way on. By the time the car was finally staged, there was a puddle waiting to be driven through. When the tree flashed, we barely moved a foot. The car immediately went up in smoke and our day was over without being in the field. 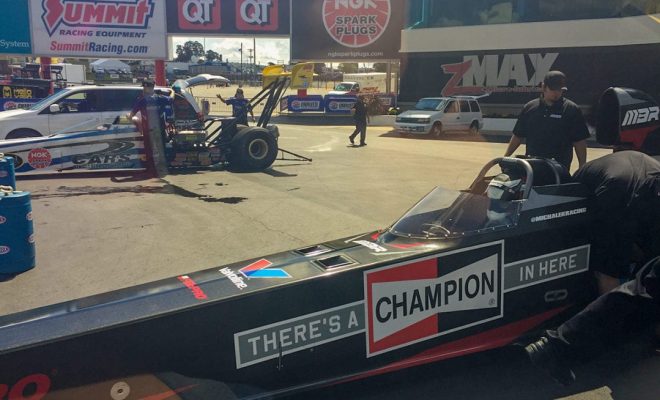 The most frustrating thing about Friday wasn’t that we smoked the tires in Q2. Rather, it was knowing that we threw away a run in Q1 that would have got us safely in the field if we didn’t shut the car off early. Looking back, we made the conservative and safe choice by not taking the car to the stripe since we were very limited on spare parts, but it sure was frustrating knowing the car could have made it during Q1 and we didn’t make a good run during Q2. As the saying goes, hindsight is always 20/20.

For the third time in as many events in Charlotte, Friday kicked MBR’s butts and we were down to one shot.

Check out Part 3 as Corey Michalek outlines the obstacles that MBR had to overcome in order to bump their way into the field on a last ditch effort at the 2017 NHRA Carolina Nationals.