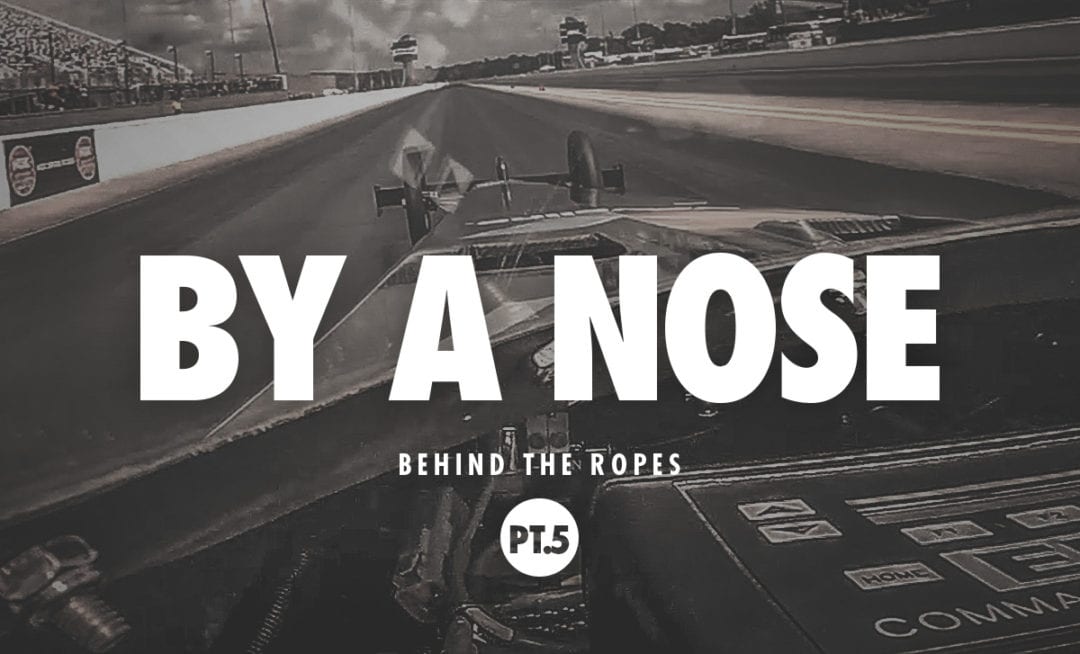 The following is the fifth installment of a 7-part behind the scenes series that takes a look at the inner workings of an upstart NHRA A/fuel dragster operation at the 2017 NHRA Carolina Nationals.

Sundays at National Events are always different as an alcohol team while you’re still racing. You go from being elated that you got out of first round on Saturday evening and looking forward to doing it again, to having to wait almost an entire day through what is probably the slowest downtime of the weekend until second round starts after the pros get the race kicked off Sunday morning. It’s too quiet in the alcohol pits during this time and I prefer to walk up to the grandstands to watch a couple pairs of Top Fuel cars to stay active. I’m still just as big of a fan of this sports as ever, and the pageantry of the national anthem leading into the opening round of eliminations will never get old.

Back in the pits, the team had a good amount of time in the morning to go over the car from front to back before E2 because the race started an hour later than usual at 12 p.m. We were able to be more methodical in our maintenance and assembly routines with this extra time. After watching the NHRA All Access replays of Q3 and E1 in the pits, it was the first time the rest of the team was able to see just how bad the wing was oscillating when the car was going through the traps. Chase Copeland spent some time analyzing the wing, the mounts, and the hardware. Upon further inspection, he noticed the front two mounting bolts were 5/16”, while the back four bolts were ⅜”. We switched out the smaller 5/16” bolts to the larger ⅜” bolts to help take up any wiggle room and more securely mount the wing. After replacing the bolts, the issue never occurred again for the remainder of the weekend. The smallest details can make the biggest difference on these cars.

We had a very close matchup in E2 against Brandon Greco. Brandon is a great racer that we’ll be running into often in the future as fellow D3 competitors. With this run, he became the first driver that I’ve ever competed against in eliminations more than once. Brandon and I first faced off against one another at the 2015 Norwalk National Event in the first round and we were fortunate to get the win as we worked our way towards a runner-up finish to Chris Demke.

Although we had lane choice over Brandon for this round, he out-qualified us and had run quicker than we ever have in our new car, so we knew that we needed to continue to try and push for incremental performance gains on this run as well as get any kind of advantage that we could off the starting line. I joked with Brandon when we pulled up in the staging lanes before the run that I had a crew member that weekend, fellow Blown Alcohol racer J.P. Gutierrez, that was cheering for him more than he was cheering for me. 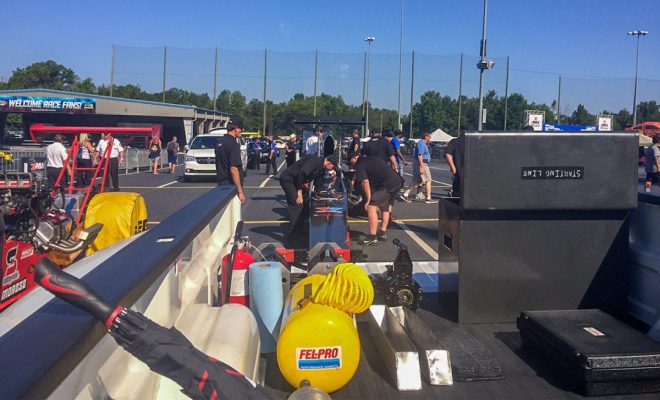 By the time we fired the cars, we were the fourth and final pair of dragsters to hit the track for E2. The pre-run process was overall pretty smooth this time around after some of the changes the guys made after our E1 run. The issue that we ran into this time around, though, was that our onboard radio went completely silent after the burnout. You can see Kyle waving his arms around out in front of the car when I was backing up so that he and Clay Copeland could manually guide the car back towards the starting line instead of relying on radio communication.

For some reason the radios in general have been giving us trouble since the first run we made in Indy. Our connection consistently goes in and out when we’re on track and we’re going to be spending some time this offseason remounting the hardware so that the antenna is unobstructed to hopefully remedy the issues that we have been facing.

Once we pre-staged the cars, Brandon didn’t waste any time bringing up the revs and he bumped right in with me quickly following behind. This was a fantastic race by all accounts. From the moment the tree flashed until the moment we went through the lights, I could hear him right beside me and the final outcome was decided by less than a car length. You can see in the video that his nose peaks out front for a split second a couple hundred feet out and I think we jockeyed back and forth for the lead a couple times. MBR was fortunate enough to cross the finish line first with our 5.40 just slightly nudging out his 5.39. That run was our best run ever on the car to that point by almost a half of a tenth, so needless to say the guys were pumped, and we needed every bit of it. 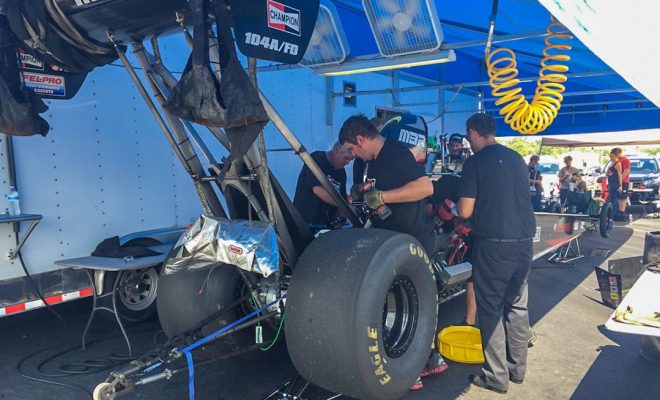 It was at this point where I started to feel like something special was happening. I knew we had another monster matchup in front of us with Alan Bradshaw in the semi-finals, who had been living in the 5.20s all weekend long, but we just had some really good mojo going.

In order to get to that point, though, our brand-new team had to first beat the clock on a 25-minute turnaround at our first ever National Event as car owners. We’ll dive directly into the thrash next time in part 6 of Behind the Ropes!

Come back Thursday, December 28 as Corey Michalek squares off against the #2 qualifier, Alan Bradshaw, with a spot in the final round on the line.