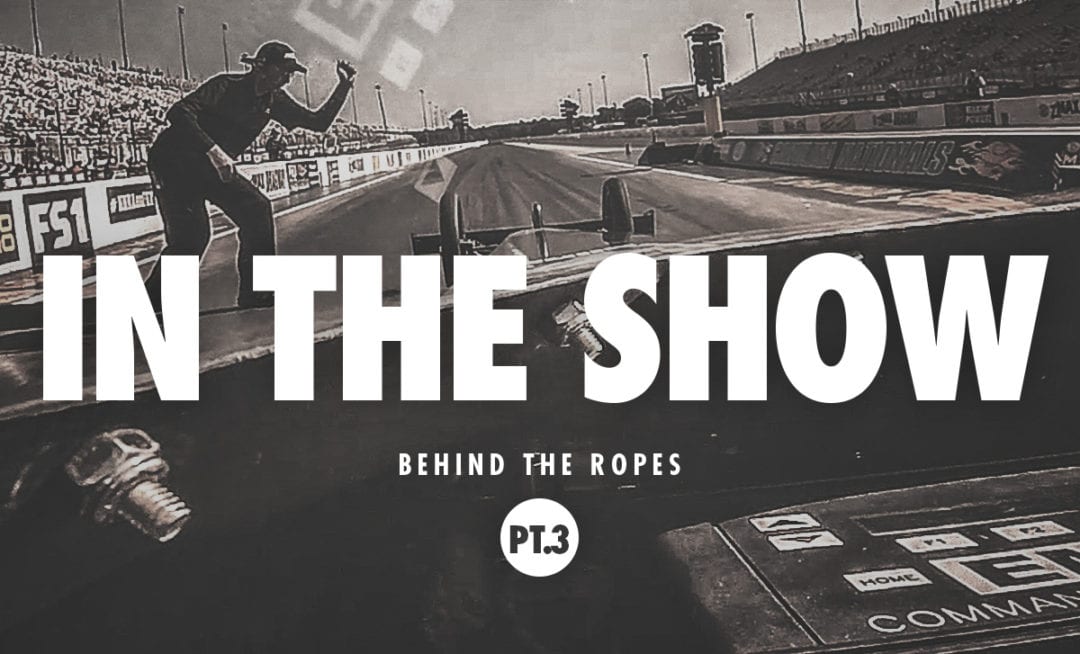 The following is the third installment of a 7-part behind the scenes series that takes a look at the inner workings of an upstart NHRA A/fuel dragster operation at the 2017 NHRA Carolina Nationals.

An all or nothing run on Saturday morning, in the left lane, against a blown car, in Charlotte to try and qualify for the show…we’ve seen this one before.

We fully expected it to be a tall order learning how to run a nitro car on our own, and that’s why we teamed up with some of the best in the business with Clay and Chase Copeland. Kyle has touched on it multiple times in his previous blog posts, but we’re not that naive to think we were just going to buy this thing turnkey (turnkey – yeah, right…), roll it up to the line, and see what it could do. We knew that there was a massive learning curve ahead of us, and it was important that we partnered with the right people like the Copelands and our other crew member, Cory Cox, to minimize the amount of hiccups along the way.

One of the things that Kyle and I laughed about after everything was all said and done for the weekend is the fact that we currently SUCK at mixing fuel…and by we, I mainly mean me. We’re still new to the process and we’ll figure out the tricks along the way, but it takes me probably 5x longer than every other guy in the pits to prepare our fuel jugs at the beginning of the day.

We also still have serious nerves when it comes to making sure our nitro percentage isn’t too high. As you can see in the video before Q3, Kyle is dumping a small bottle of alcohol into the fuel tank with one pair remaining before our run. To this point, we have consistently brought the percentage down way too far. Of the 6 runs that we went to the scales in Charlotte, 2 of the runs were under 94% and 3 of them were under 94.5%. To say that we left some performance on the table there would be an understatement.

The Q3 run didn’t feel any different than in 2014 when we pulled into the staging lanes that morning looking to break into the field on our final qualifying shot. Kyle and the rest of the crew worked diligently late into Friday evening to make sure the car was set up as best as we could get it, and now it just came down to executing. The stakes were obviously higher than they were the previous runs, but we were confident the car would be able to make a strong enough lap to get into the show if it just made it off the starting line. Getting it to do that, though, appeared to be a taller task than we anticipated after seeing Josh Hart, a heavy-hitter in the class, immediately go up in smoke on the starting line in front of us before Q3.

Now, I know Josh was not a fan of the results of the weekend, especially coming off his victory at the U.S. Nationals two weeks prior to this race, but his run in Q3 was one of the coolest things that I’ve ever seen in an A/Fuel car. When he took off in front of us, I saw him smoke the tires and I immediately looked elsewhere because I knew he wasn’t going to lower the bump. But then I looked back up again and he must have pedaled his car 10 times to get it down the track. We were pitted next to each other and in between Q3 and E1 I introduced myself to him and he just laughed saying he was frustrated about not getting in and he decided that he was going to get it to the finish line one way or another. Needless to say, it was badass to watch and everyone on the starting stopped in their tracks and watched the replay of his run on the big screen. 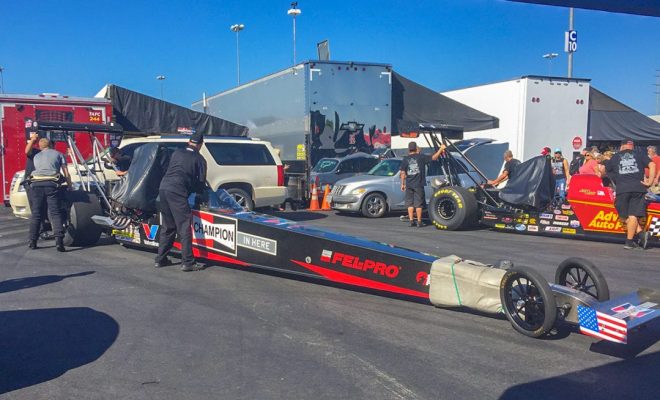 After seeing a couple cars have trouble getting off the starting line ahead of us in our lane, Chase and Clay Copeland both agreed that I needed to drag the brake at the hit of the throttle to make sure that we got off the starting line. This was actually the first time that I had ever been asked to do that in my time driving an A/Fuel car. The process of doing it isn’t a big deal, but doing it properly for the first time in what could be the last run of the year, in a do-or-die situation added a little anxiety.

Once the car started for this run, some stuff went well, some stuff didn’t. We adjusted the idle of the car for the staging process after Q2 and it rolled straight in compared to the day before, but the vibrations persisted (although not as bad as previously) and the motor didn’t want to cooperate when trimming the fuel both after the burnout and when returning to the starting line.

I’ll be the first to admit that I’m still learning every time I drive an A/Fuel car, even some of the fundamentals. To this point, I’ve never had an opportunity to really get in a groove because I just don’t make many runs, and any races that we compete at generally take place with multiple months in between that time and our previous event. So, in order to be prepared, I do an intense regimen of visualizations when I’m at home to get the routine down. The “routine,” to this point, though, had never included keeping a hand on the brake when leaving the starting line. So, it was a balance of consciously thinking about what to do when the car launched in addition to methodically going through my routine.

When the tree flashed and I stepped on the throttle, I remember consciously thinking, “don’t take your hand off the brake.” The car stayed straight and it was pulling — good start. I then shifted into starting to question when I should get off the brake. I was still slightly dragging them and I was able to see Tom Fox Jr. start pulling away from me so I figured I better let go and hope it stayed hooked. Hindsight is 20/20 and I probably should have let off them once the car made it off the line, but now I’m prepared with that experience and I’ll be better the next time around.

I killed the 60’ time by dragging the brakes, but we made it safely off the starting line and the car really took off from there. Tom ended up making a great 5.38 second pass to get in the show and we were able to chase him down in the lights with our 5.44 at 268 mph. Both the elapsed time and MPH numbers that came up on the scoreboard in our lane were new career bests for us in our own car, and it positioned us in the #14 qualifying spot. 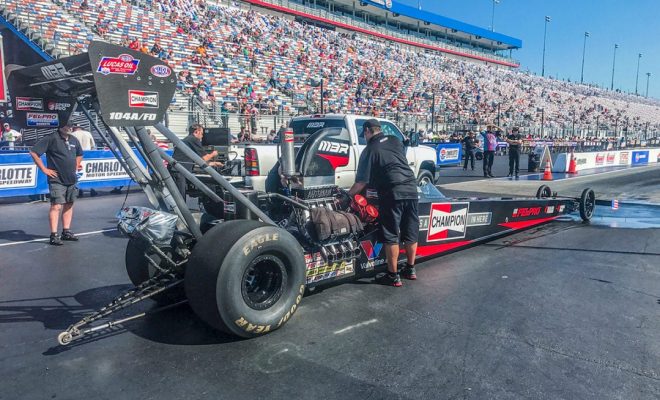 This was our first National Event as car owners, in any class, and we put our entry in the field at over 268 mph. Things like that are still hard for us to comprehend when we’ve dreamed about doing this for so long. When we get any form of positive results, it’s extremely gratifying and also surreal. Of all these great things, the biggest success was that the car made a full pull without harming a single part, rewarding Kyle and the rest of the crew for all of their hard work in between Indy and Charlotte to remedy the issues that we faced the first time out. We were pumped, to say the least.

There’s just something about this place when we don’t get in until Q3. Just like 2014, getting that one solid run in and getting a chance to compete in eliminations provided us with some momentum for the rest of the weekend. This time around, though, we had an absolute juggernaut waiting for us in round 1.

And that’s where we’ll pick up in the next post.