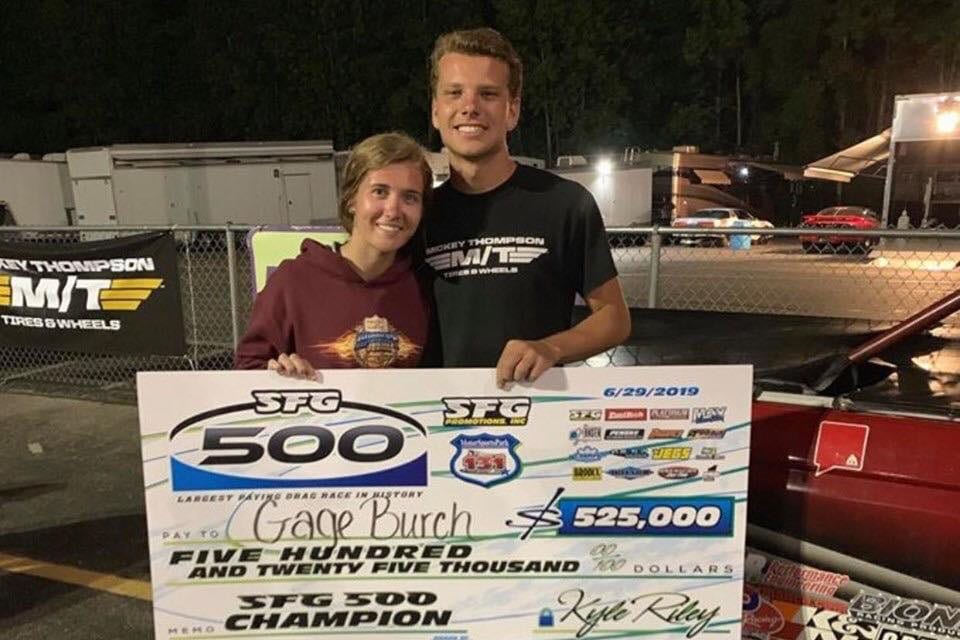 This time last week, Gage Burch had never set foot in Michigan. He left the Wolverine State Sunday with a six-figure payday.

It was a solid week of racing for the 19-year-old Florida resident as he earned the victory at US 131 Motorsports Park’s massive Inaugural SFG 500 bracket race in Martin, Mich. The race kicked off last Wednesday, running through the dawn Sunday morning, a marathon event featuring nearly 700 racers. Some of the biggest names in NHRA drag racing like Jeg Coughlin, Jr., who made it to the semi-finals, showed up for this bracket racer’s dream race.

“It was kind of like a roller coaster,” Burch said over the phone late Monday morning. “My girlfriend and I drove in from Iowa to Illinois and we stayed the night. I woke up at 4:30 a.m. Wednesday and drove the rest of the way to the track and we stayed up all day and raced. I think we wrapped up at midnight. We went to the hotel and got like six hours of sleep and just kept going like that the whole weekend. I think I ended up with nine hours (of sleep) total before we started the 525.

“I was a little bit worried about that, but I figured if I got a nap or two in between the rounds, I’d be OK.”

With as much as seven hours between rounds, Burch stayed rested and mentally fresh for the 10 rounds he had to win in order to visit the Winners Circle. Driving his friend Matt Dadas’ 1984 Ford Ranger, Gage collected a $300,000 purse, which he split $160,000/$140,000 with runner-up, Johnny Ezell.

Burch and Ezell are past Drag Illustrated 30 Under 30 honorees.

Burch was confident in his ride, although Dadas did tell him a small fib prior to the beginning of Race Week.

“On Day 1, I wasn’t sure how good the truck was,” Gage said. “I’ve known Matt for a couple years now and I asked him (how it was) and he said, ‘Oh, it’s pretty good.’ He lied to me because it was really good! He didn’t tell me how good it was, he just said it was pretty good. So after the first day, I knew we could do something. I thought we had a good chance to win.”

With the number of entrants and well-funded big-name star power at the track, Burch, who got his start racing Jr. Dragsters at age eight, wouldn’t have been blamed for letting nerves get the best of him. Turns out, the race was just a week-long good time for the young man who calls Bradenton (Fla.) Motorsports Park his home track.

“You just have to have your state of mind when you get into the car and put your helmet on,” Burch said. “You just gotta have that place you go and just be yourself up there. I had the best car there, I feel, because me and (Matt), we get along super good. Our girlfriends are friends, so we just hung out and probably had the best time there. It wasn’t really like a serious time.

“(Matt) just kept me laughing and was joking around the whole time so I didn’t have time to think about much. We were just having a good time and when we were down to 15, we were doing big burnouts and just having fun.”

Easily the biggest victory of his young career, Burch began receiving congratulatory calls and text messages the deeper he got into the field.

“It’s been crazy,” he said. “As soon as I won, my phone was just blowing up. I just turned it off at around eight cars to go…I was just trying to keep a level head. It’s crazy. I haven’t been able to get back to everyone. I just want to thank everyone.”

Heading to Bristol Dragway for this weekend’s BTE World Footbrake Challenge XIII, Burch said he’s planning on investing the money in an effort to make it grow.

“I’m not really sure,” he said. “I’m going to save it, try to do something positive. Maybe invest it somewhere and see if I can make more out of it.”