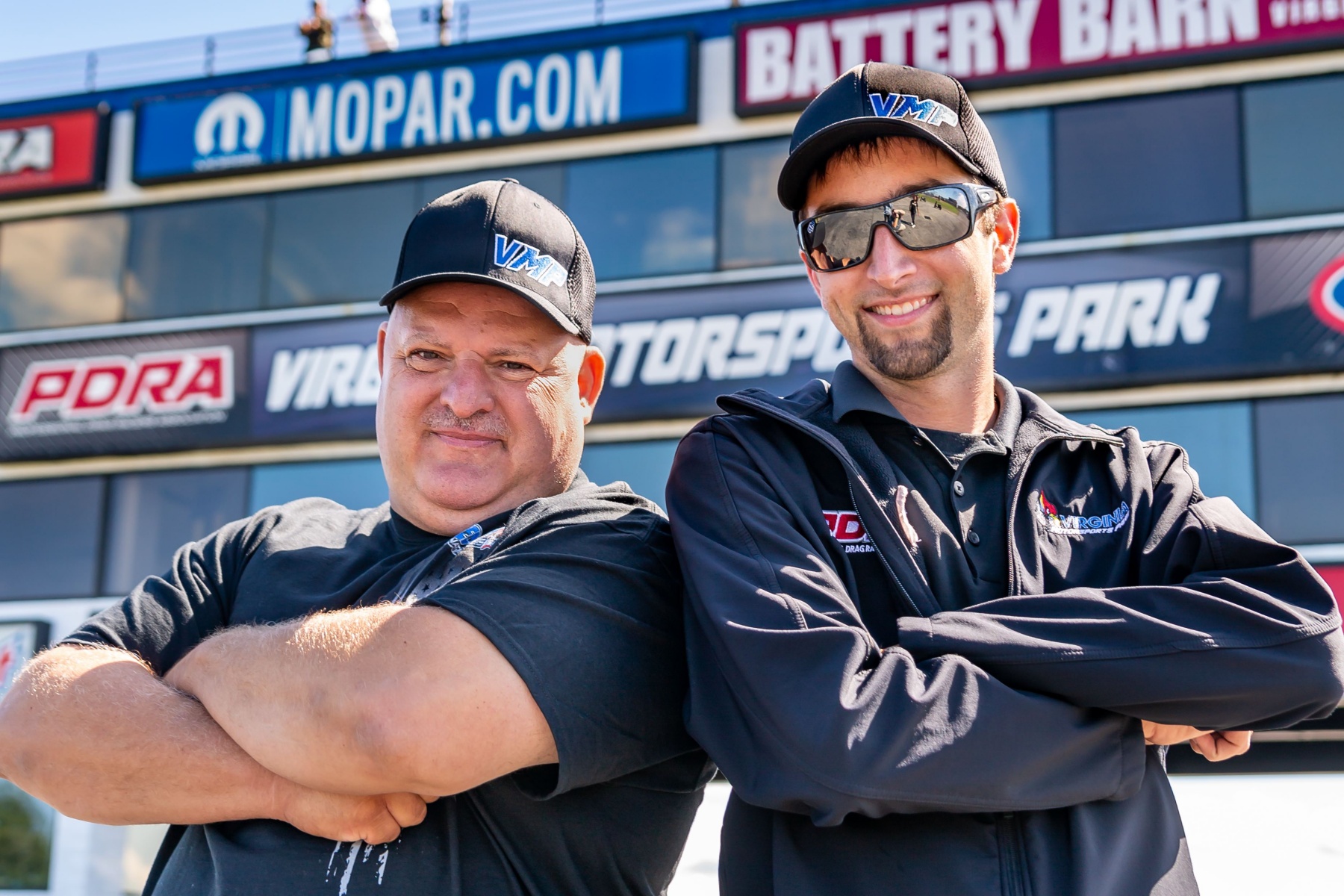 Now in its third year at Virginia Motorsports Park, the legendary Shakedown Nationals has settled into its new home near Richmond, Virginia. Under the direction of Tyler Crossnoe and the ownership of Tommy and Judy Franklin, VMP has taken the popular event to new levels. That continues this weekend at the COMP Cams Shakedown Nationals XIX presented by FuelTech, September 15-18.

“I feel the event is starting to settle in,” said Crossnoe, the vice president of VMP. “Racing right now is still at a very odd stage as some classes are flourishing while others are struggling, for reasons we are all scratching our heads about. This being our third season really lets the event begin to sink its teeth into the schedule, so to speak, and becomes a do-not-miss placeholder for fans and campers.”

Like in past years, Pro Modified is the headliner at the Shakedown. With M&M Transmission, Proline Racing and Hoosier Racing Tire all throwing support behind the class, Pro Mod racers will compete for $25,000 to win and $5,000 to runner-up. The defending event champion is Ron Muenks, who drove Dave Pierce’s nitrous-fed “Purple Gorilla” ’68 Camaro to victory with a 3.65-second pass in the final round. 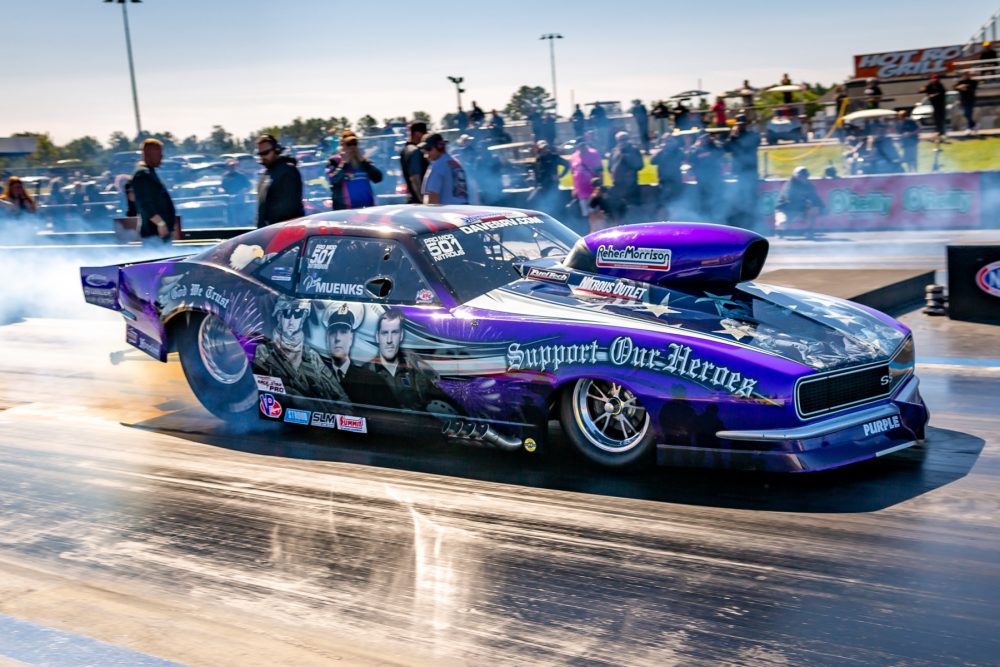 New for 2021, the event will include PDRA Pro Street, the series’ effort to bring back true Outlaw 10.5-style racing. Unlike the most recent form of Outlaw 10.5, which effectively disbanded at the end of the 2020 season, Pro Street does not allow radial tires. Drivers are limited to bias ply tires, with a 33×10.5W maximum. Pro Street will pay $5,000 to the winner. In 2020, the late Blake Copson claimed the Outlaw 10.5 Shakedown win. 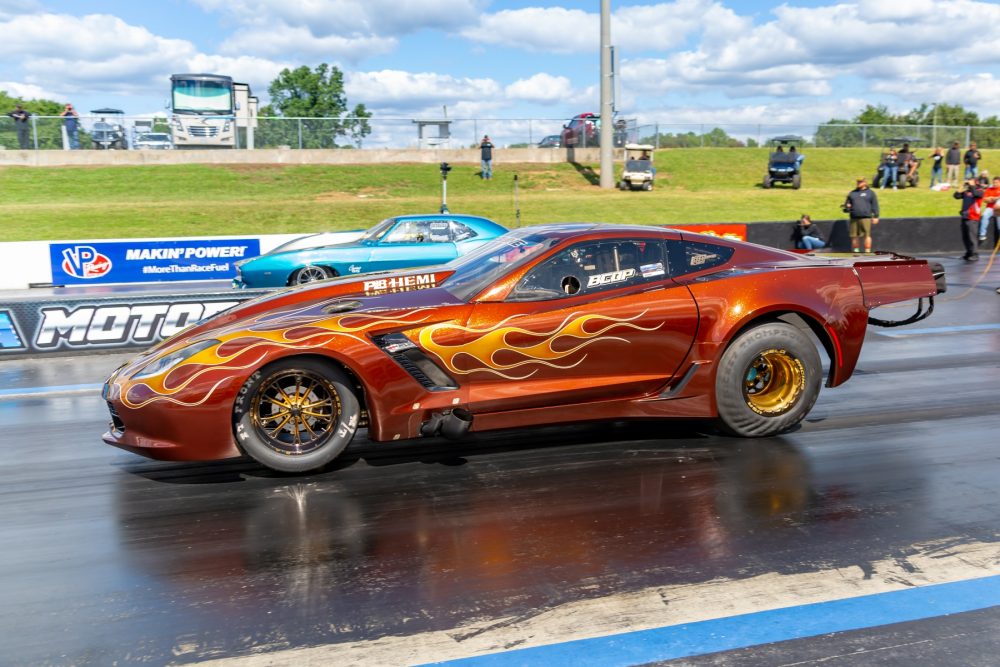 “Pro Street is a new name for an old-school favorite of Outlaw 10.5,” Crossnoe said. “Just at the Shakedown alone, 10.5 racing carried the flag for nearly all of the years at Englishtown and at Norwalk. The class is just flatout cool. Mid-track wheelstands, cars that began as a real OEM vehicle, thousands of horsepower and all done on a bias-ply slick that measures 10.5 inches wide. That just screams cool – I don’t care if you’re a nitrous girl or a supercharger guy, wheels up, side-by-side drag racing of any kind is sheer entertainment and excitement and that’s what I’m hoping to see from Pro Street this weekend. For the racers, it’s another venue to count on for them to race their cars each year. As the PDRA continues to try and grow the class, I felt it needed an ‘extra’ to also give the racers another venue to race at outside of the PDRA championship series. Enter: Shakedown.” 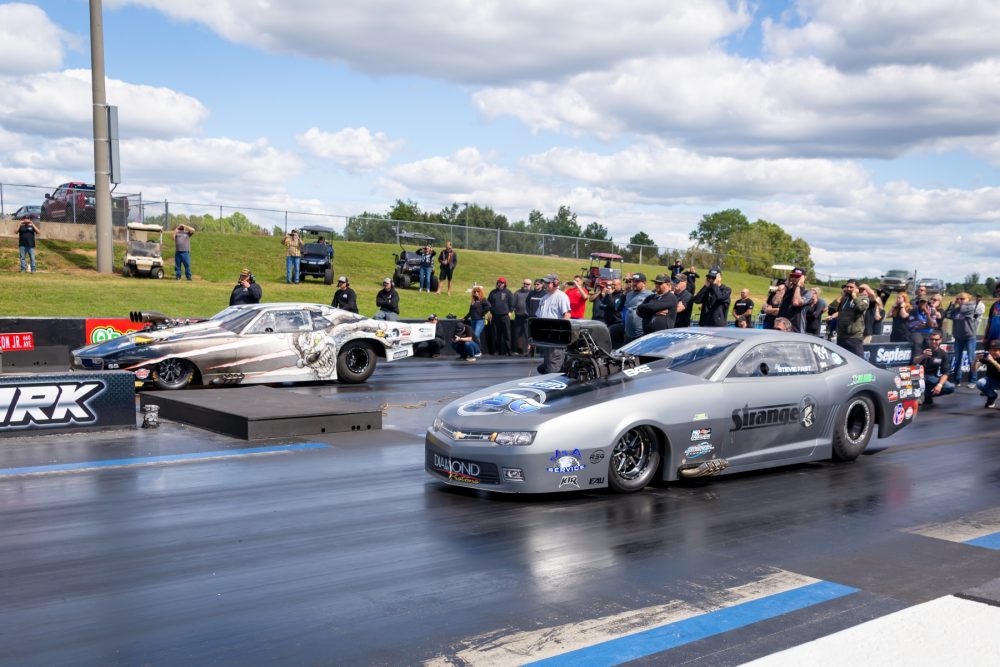 Stevie “Fast” Jackson takes on Luis de Leon in the 2020 Radial vs. the World final

Noticeably absent on the lineup this year is Radial vs. the World, which has seen declining car counts over the last year or so. When asked why the class isn’t racing at the Shakedown this year, Crossnoe admitted it was a hard decision, but all signs pointed to it being the right one.

“This is definitely the hardest question you’ve asked yet,” Crossnoe started. “On a personal level, I have been involved with Radial vs. The World as a promoter in some way since 2012, the second longest-tiered promoter of the category outside of [class creator] Donald Long. I’ve seen the class go from 4.30s to 4.20s, prepped the first 3-second run at Huntsville Dragway, reset the world record in the snow at Outlaw Street Car Reunion and ‘the run’ which was famously renamed as ‘Threes In The Freeze’ and is still talked about to this day, and RVW has been a part of every small-tire event that I’ve ever promoted until now.

“It’s been a nine-year stint of building relationships with these racers, tuners, car chiefs and more,” Crossnoe continued, “and it’s hard to see this class that’s been so popular for so many years almost appear at its last breath.”

Virginia Motorsports Park hosted the eighth running of Crossnoe’s Outlaw Street Car Reunion in April. Unlike Shakedown, where Pro Mod is the headlining class, RvW took the main stage at OSCR and raced for $20,000 to win. A literal handful of RvW cars showed up, and Crossnoe knew the class’s days were numbered, at least at his events.

“When we had a total of five – yes, the amount that you can count on one hand – five cars attend and purchase tech cards to race for a $20,000 to win purse – not to mention runner-up, semifinal and quarter-final payout, which was a grand total of over $27,500 – for five cars to show up and attend after promoting the class for nine years and dumping hundreds of thousands of dollars’ worth of payouts for that very category alone, it personally hurt,” Crossnoe admitted. “We all can do numbers and see the financial side, but I really took that personally.

“For the Shakedown, we decided to move that funding around to other classes, replaced RVW with the PDRA Pro Street category and paid the classes who attended in past years better money to win and/or better round money, which puts more money in more racers’ hands,” Crossnoe said. “I personally hope to see the class make a bounce back in attendance and will always love the class from the promoting days or helping on a car or two along the way. But when the attendance numbers are that low, it becomes an easy decision whether to continue the category for the time being, or not.” 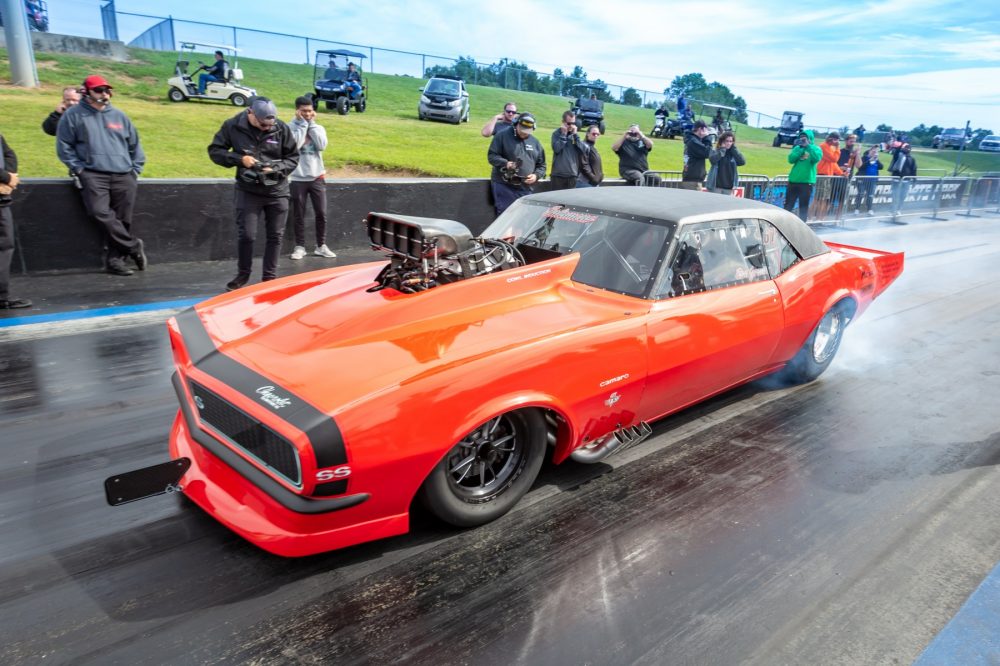 Pro 275 will take over as the quickest and fastest drag radial on the property. A smooth $10,000 will go to the winner in Pro 275. Ron Green is the reigning event champion after defeating Mark Micke in the 2020 final round.

The sport’s future stars in the Jr. Dragster ranks will also get to race at the Shakedown, as the P2 Contracting Jr. Dragster 32-Car Shootout was added to the lineup, with the winner receiving $2,500.

A “Most Wanted” 32-car shootout will also take place. 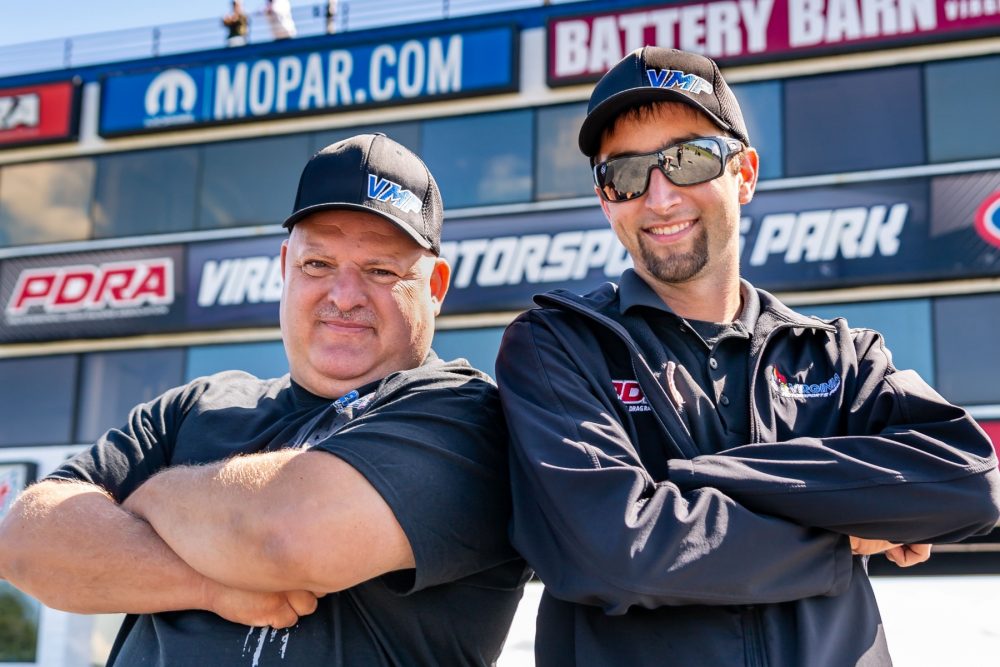 It’s different by design, as Crossnoe and the Franklins add their own touches to the event, while still respecting and carrying on the traditions Hance started at E-Town.

“The history of Shakedown is so storied, it’s honestly easy to build the event,” Crossnoe said. “For the racers, it’s known as one of the high points of the year – big payouts, stiff competition, as good of track conditions that you can get with the given weather and conditions and just a flatout good time at the dragstrip. We’ve began sort of slow with the customization factors, but adding a Racer Appreciation Dinner on Thursday night really opens the weekend with a welcoming feeling for people who may be making their first trip to VMP or to the Shakedown itself. We have a number of goals and plans, but one thing that we do not want to do is jump with too much, too quick and run out of new and exciting additions and tweaks to have each year.”

Tickets for the Shakedown Nationals are available online or at the gate. Fans watching from home can tune in to the official event livestream on FLORacing.