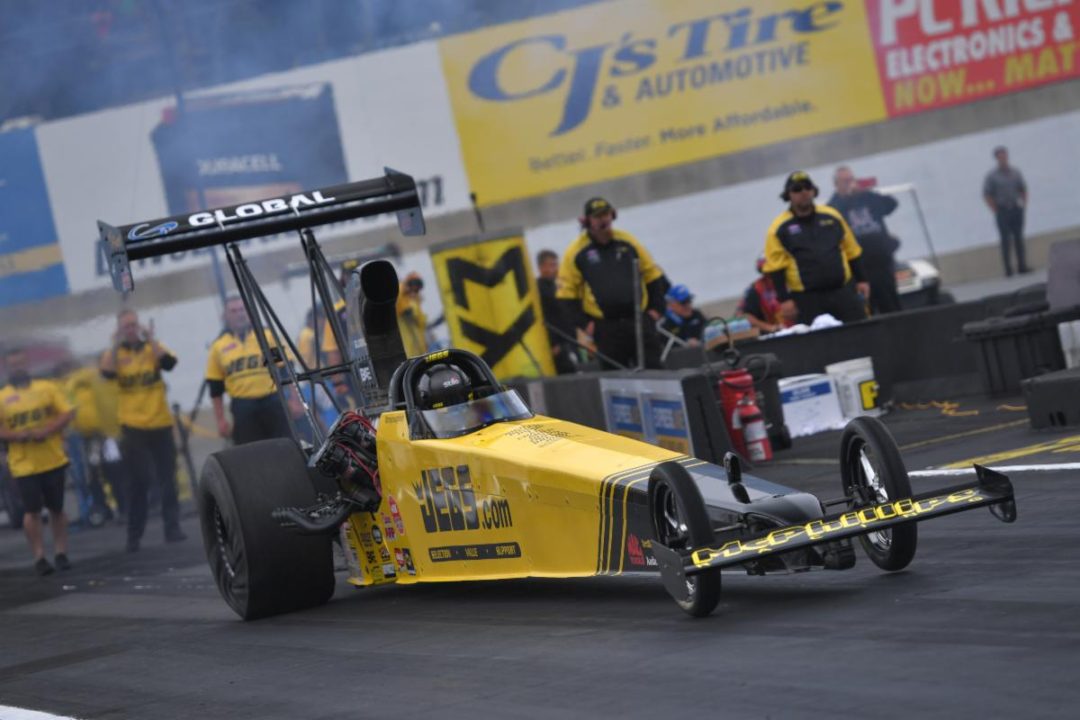 In what may be the most impressive race of his young career, Troy Coughlin Jr. took the absolute toughest route to the winner’s circle of the 35th annual Mopar Express Lane NHRA Nationals Sunday to claim his fourth victory of the season in his JEGS.com McPhillips Racing Top Alcohol Dragster.

Ranked third in the world leading into the event, Coughlin beat national points leader Shawn Cowie in the quarterfinals, fourth-ranked Duane Shields in the semifinals and second-place runner Megan Meyer in the final to claim his team’s home event for the second straight year.

“Maple Grove Raceway has such a special place in my heart,” Coughlin said. “Especially being a part of McPhillips Racing these last two seasons. They all live nearby and this is their home so it’s super rewarding to win back-to-back races here. I’ve never done that before.

“This one took an incredible amount of work. These guys — Rich and Richie (McPhillips), Duke Roney, John Flenard, Andy Goode, Charlie Wroten and Charlie Greco — they busted their butts with short turnarounds all day. They made zero mistakes and that’s why we’re standing here in the winner’s circle.”

Nothing came easy for Coughlin on this day. Opening against Cowie, who was 3-0 against Coughlin in prior head-to-head races, a late-starting Coughlin had to chase his rival all the way down the strip, finally inching ahead just a few feet before the finish line to win with a 5.181 at 280.14 mph to Cowie’s 5.203 at 279.50 mph. The final margin of victory was .0072 seconds, which translates to just a couple of feet at that speed.

In the semifinals, Coughlin managed to get a .020-second head-start but Shields quickly passed him, forcing another brief chase. This time Coughlin had a little more breathing room, taking the stripe first with a 5.221 at 279.27 mph to Shields’ 5.248 at 277.77 mph.

With a third Top Alcohol Dragster national event trophy on the line against Meyer, who was 5-0 against Coughlin in previous matchups, yet another pursuit was required by Coughlin after he gave up a .039 advantage at the start. It was all about horsepower at that point and the JEGS machine had enough to catch and pass Meyer’s rail for the win, 5.211 at 279.96 mph to Meyer’s 5.261 at 273.61 mph. The margin was .0115 seconds.

“We made all the right choices today, all year really, and for this team it’s truly all for the love of the game,” Coughlin said. “With so many friends, brothers, sisters, kids, grandkids on hand, we had that extra boost of support we needed. I couldn’t be happier to deliver this win to McP Racing.”

The reigning North Central Region champion, Coughlin has now raced to nine final-round appearances this season, winning four times. Aside from national event victories in Reading, Pa., and Norwalk, Ohio, he was triumphant at divisional events in Atco, N.J., and Bowling Green, Ky. 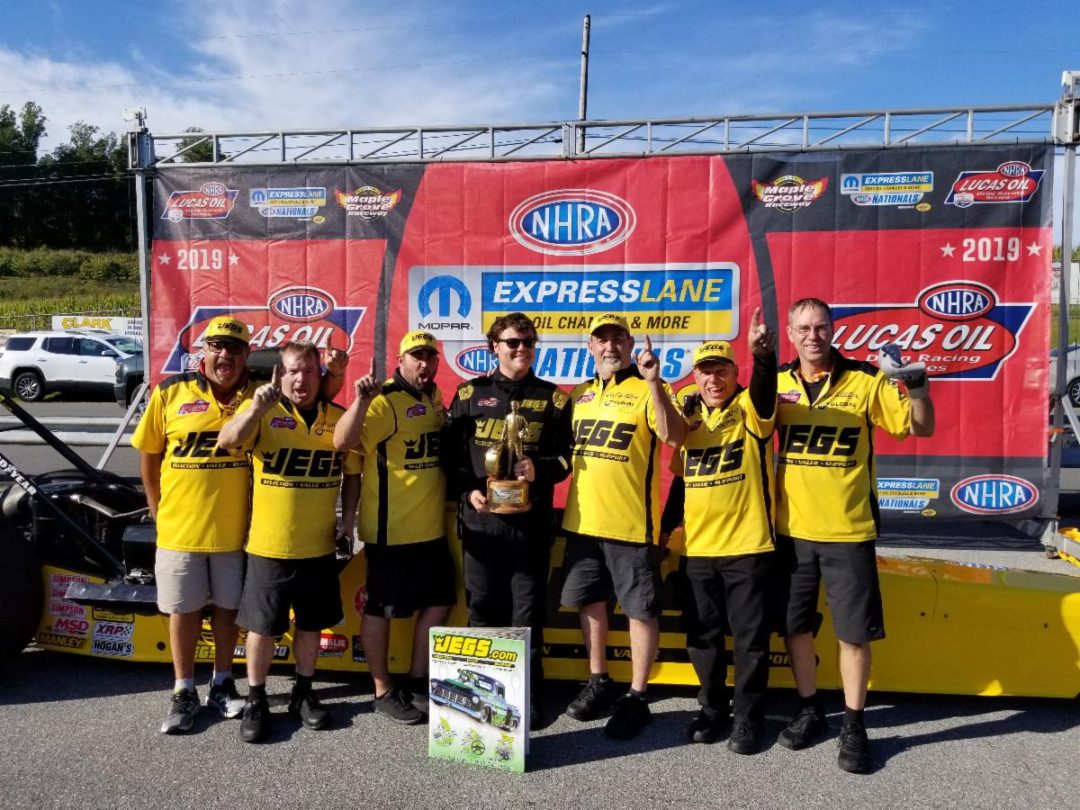 Although he didn’t bag his sixth Reading trophy this time through, Jeg Coughlin Jr. used a semifinal finish in the first of six playoff races to move up two positions in the Countdown to the Championship playoffs. Jeg. Jr. beat Bob Benza and Deric Kramer before fouling out at the starting line by -.002 seconds against Fernando Cuadra, which sent the upstart racer to his first NHRA Pro Stock final.

“We gained a bunch of momentum this weekend and we definitely feel like we’re leaving town in better shape than how we arrived,” Jeg Jr. said. “We made some wholesale changes to our team and everything we tried worked out perfectly. I couldn’t be happier unless we had managed to go all the way and get a win today.

“The car was amazing and I was happy with my driving. It’s hard to believe we went red because I surely didn’t think I got that deep into the green, let alone over to the red side, but these things happen. We know what we have now.”

“It stung for a minute but then we went over and watched my nephew Troy Jr. score that huge win in Top Alcohol Dragster,” Jeg Jr. said. “That team has had one helluva year and it’s not over by any stretch. Them have been to the final at almost every race and won four times now. That’s just phenomenal.

“I get a lot of personal satisfaction watching my brothers win, and now my nephew. I have so much more emotion running through my veins then I do when we do well because I’m just so happy for them.”