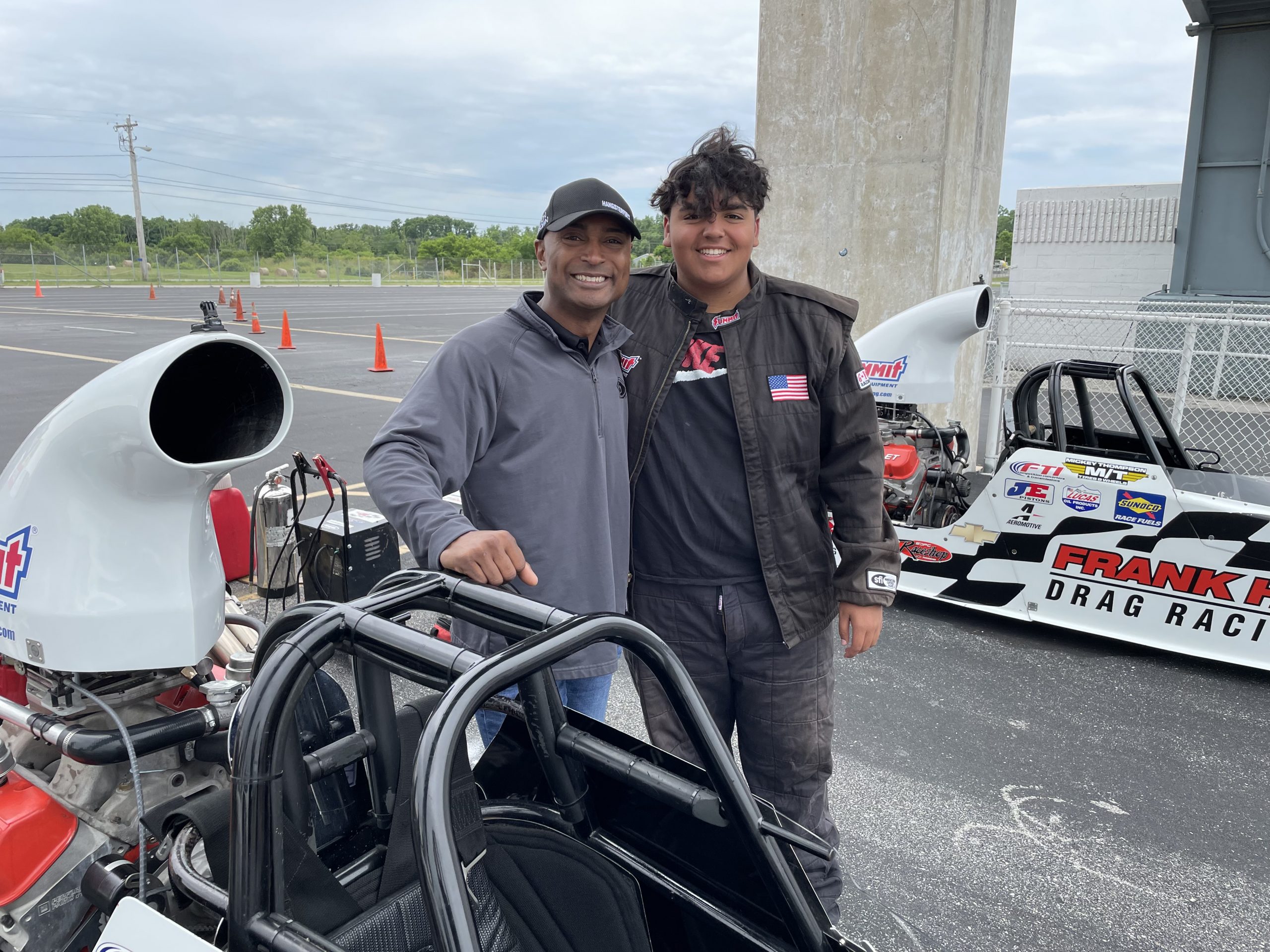 For NHRA Top Fuel legend and three-time world champion Antron Brown, there’s something even more important than the success of his career – the success of his children. Now, as his middle child, Anson, prepares to age out of Junior Dragster competition, Antron is passing the torch to the next generation of Brown family racers.

Before he got started racing in NHRA Pro Stock Motorcycle in 1998, Antron attended Frank Hawley’s Drag Racing School to complete their Pro Stock Motorcycle class; he joined the Don Schumacher Racing team in 2002 and returned to the School with teammate Angelle Sampey in 2005 to brush up on his skills.

In 2007, Antron once again trusted Frank Hawley’s Drag Racing School to prepare him for the next step in his career when he received his Top Alcohol Dragster license and went on to pilot the pinnacle of performance, a Top Fuel dragster.

Antron remembers that time at the School as if it were just yesterday, as he shifted his alcohol dragster quicker than Hawley had ever seen anyone do before. “I was swapping feet and doing everything to leave the line and shift down the racetrack,” laughed the driver, who impressed his instructor tremendously. “Frank [Hawley] said the Top Fuel Dragster would be easier for me to operate, but more difficult due to the rate of acceleration and was prepping me to understand what would happen when I moved up.” 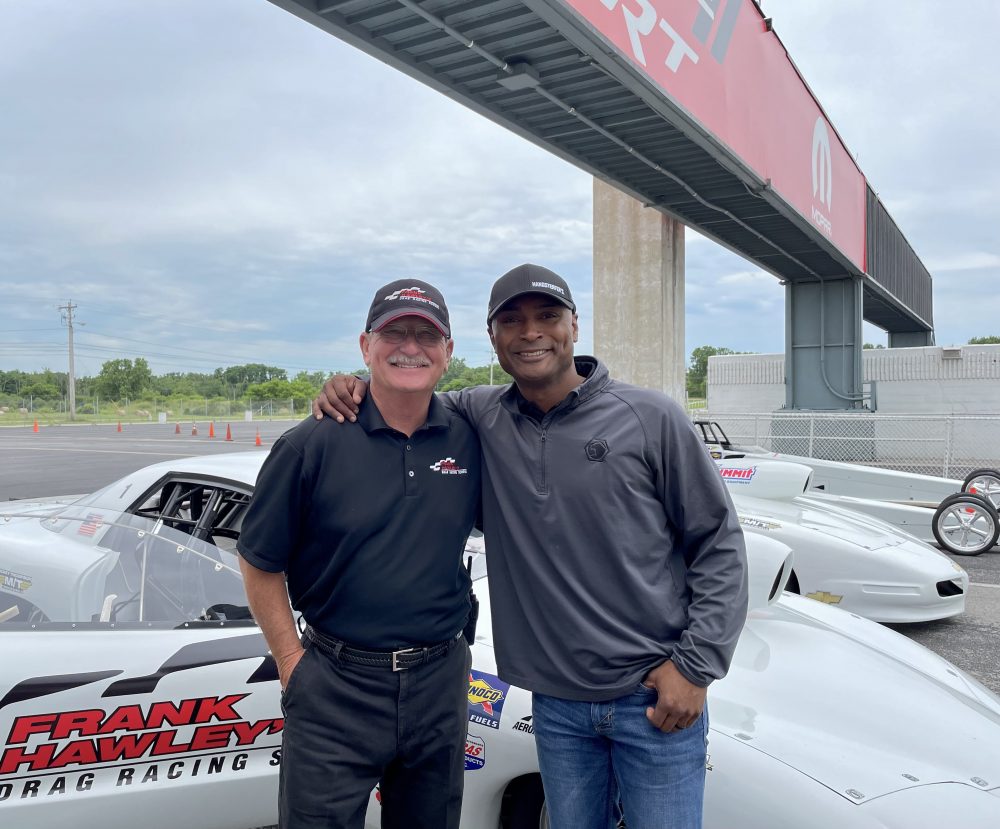 When he finally did make the jump, Antron’s natural aptitude made others wonder if he was a true rookie or a veteran of the category. Driving the 10,000-horsepower machine was practically second nature to Antron, and he credits the Frank Hawley Drag Racing School with helping him get to that point.

“It’s more than just learning how to go down the racetrack, it’s also a mind game. Frank has all of the knowledge to give you the mental focus and preparation to be repeatedly successful,” asserted Antron. “From true beginners learning the basics to experienced professionals, Frank can take a racer of any phase and help them learn something. If you have the willingness to learn, you’ll improve.”

When Antron’s son, Anson, wanted to go racing at just 8-years-old, the Indiana-based family fully supported the budding racer’s dream and got him started in the Junior Dragster ranks. With a few championship titles of his own in the Midwest Jr. Super Series, Anson showed promising skill early on. For his upcoming seventeenth birthday in 2021, though, Anson decided he wanted to step up to a bigger car and his parents gave him the gift of a Super Comp licensure course at Frank Hawley’s in June at the famed Lucas Oil Raceway in Indianapolis.

Thinking back to his own days at the School and the nerves that came along with the unexpected, Antron tried to reassure his son that he would be just fine – and he was. “All of the kids in Anson’s Super Comp class listened and responded well. It’s amazing to see the next generation of drivers come up all together,” shared Antron, who enjoyed seeing the kids compete on the track and cheer each other on throughout the entire experience. “I remember seeing Anson’s face and his excitement when he came back from making his first full quarter-mile pass over 150 miles per hour and thinking… wow, he’s all grown up.”

Anson was admittedly nervous at first, too, but quickly realized that he had no reason to be. “I had a great time and Frank was amazing with his instruction. I don’t think anyone could have taught me better, not even my dad,” laughed Anson, who enjoyed receiving feedback on how he could improve as a driver and hopes one day to get behind the wheel of a Pro Mod doorslammer or nitro-fueled Funny Car or Top Fuel Dragster just like his father. “The Super Comp car was bigger and faster than my Junior Dragster and was really exciting. Whenever I’m in a car, I’m happy.” 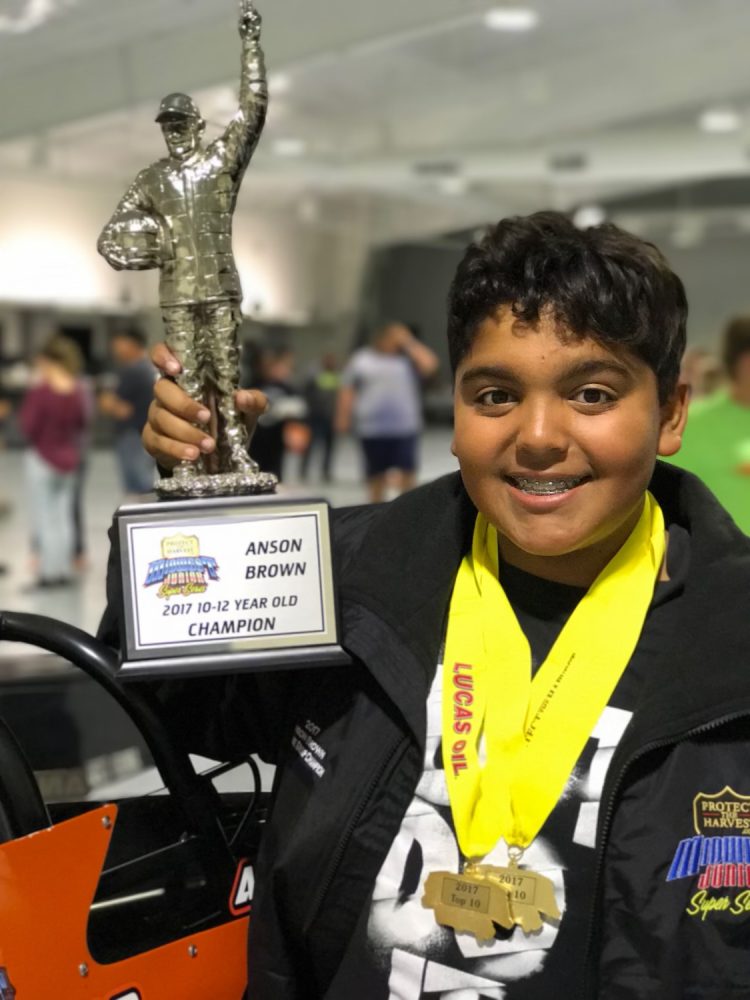 Hawley loves shaping a part of drag racing’s future through helping aspiring drivers, especially teens, to cut their teeth in a safe and controlled environment.

“Anson clearly has learned a lot from watching and listening to his dad,” affirmed the School’s founder. “Antron is a perfect example of how you can actually achieve your dreams in our sport. He has worked his way up to a champion driver and now an NHRA Top Fuel team owner. He’s one of the best drivers in our sport, and he does an incredible job for his sponsors. He is truly a perfect role model for Anson.”

Although Antron and Anson both are ready for the next phase of the young man’s driving career, the elder knows that there is no rewind button on life. Instead, he’s simply trying to enjoy the moments, memories, and time that they have in the Junior Dragster ranks while they still can.

In addition to Anson, Antron’s two other children, Adler and Arianna, are also carrying on the family’s drag racing tradition with their own endeavors. Where all of their careers ultimately take them (after college, of course), and whether that’s within the automotive industry or not, Antron and his wife, Billie Jo, will always love and support them unconditionally.