Ram Clutches has introduced a new range of billet aluminum and billet steel flywheels for V6 Mustangs from 1997 to 2004.

The advantage of the billet steel over the original cast iron unit is that, though they weigh the same, around 32lbs, the billet steel unit is significantly stronger. Crucially, it remains free of stress cracks and, therefore, safe at high engine speeds and higher clutch clamping forces. In addition billet steel flywheels operate more effectively with modern high-performance clutch friction materials than do their cast-iron counterparts.

In comparison, the aluminum flywheel has the decisive advantage of carrying minimal weight. In this case it rids itself of half its mass—tipping the scales at 16lbs. Lower mass means a lower moment of inertia, which translates to faster response—faster acceleration and deceleration as well as less wheel spin. 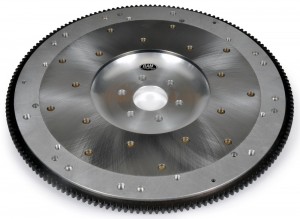 Constructed from 6061-T6, Ram’s aluminum flywheels use 1/4in thick steel inserts to avoid distortion.  To maintain their flatness the inserts, which mate with the clutch disc friction surfaces, are fastened to the flywheels by 18 rivets.

To overcome clutch snatch or chatter and provide minimal run-out, these new flywheels are Blanchard-ground, contributing a proper friction surface. It also ensures the flywheel is parallel to the mounting flange. In addition, Ram counter-bores the flywheels for button-head cap screws that secure the starter gear ring to the flywheel.   Ram’s new flywheels replace the original cast iron units on all 3.8 liter V6 Mustang models of the following years: 1997-1998; ’99-’00; and both 3.8 and 3.9 liter models 2001-2004. The flywheels on model years from 1997 to 2000 are externally balanced; the later units from 2001- ’04 have zero balance. All flywheels are fitted with 164-tooth starter gear rings.

Part numbers and prices are as follows: