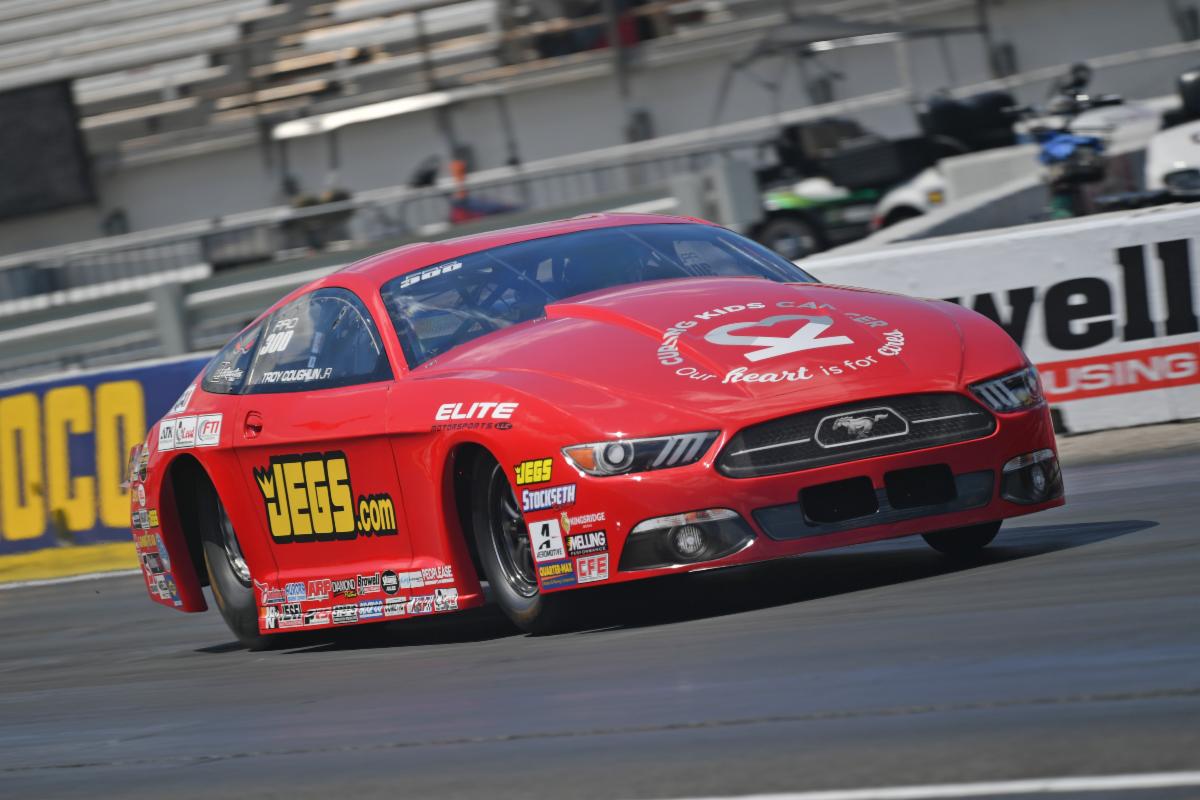 Pro Stock points leader Jeg Coughlin Jr. is used to keeping his foot on the gas, something the six-time world champion promises to continue when drag racing returns to Lucas Oil Raceway for this weekend’s Dodge NHRA Indy Nationals, the third straight national event at the historic quarter-mile strip.

“I think we’re all coming to the realization of how quickly things can change during this pandemic,” Coughlin Jr. said. “We’ve seen races being rescheduled, postponed or even cancelled outright this year so we’re just going to treat every single one we go to like it’s the final race of the Countdown to the Championship and the title is on the line.

“Really, dating back to last year’s championship chase, Rickie (Jones, crew chief) has been very aggressive with the tune-up and the JEGS.com Elite Motorsports Chevrolet Camaro has really responded well. We finished strong last year and we’re off to an incredible start this year so there’s no reason to change our tactics.”

Coughlin powered from eighth to second place in the six races of last year’s championship charge, racing to a win and two runner-up results in the final three events. This year, he’s got a win and a runner-up in the three national events contested so far.

“We’ve had one helluva start to the championship run this year and we need to keep it in high gear,” Coughlin said. “We’re going back to the same track we competed at a three weeks ago where we qualified No. 2 and ended up second on race day, so our expectations remain very high.

“Considering the unique situation we’re in this year I know everyone at Elite is completely focused on limiting our errors, checking and double-checking every function we perform, and staying on the front foot. That goes for me as well: I want to be as fluid and consistent as a driver can be.”

Heading into the weekend, Coughlin leads second-ranked Jason Line by just eight points, with Elite teammate and reigning champion Erica Enders 15 points off the pace. The next driver in the standings, Kenny Delco, trails a distant 132 points back. 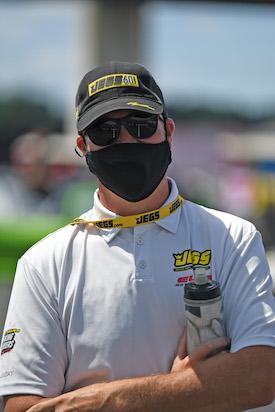 Joining Coughlin in the Elite Motorsports pit for the second time ever is his nephew Troy Coughlin Jr., whose switched to the factory hot rod class after winning two Top Alcohol Dragster regional championships the past two seasons. Troy Jr. will also be racing in Super Comp at this event.

Just as he did at the first Indy national event the second weekend in July, Troy Jr. will be driving the JEGS.com Elite Motorsports Ford Mustang in Pro Stock, while sticking with his trusty JEGS.com dragster in Super Comp.

“I feel like I learned a lot after actually competing in Pro Stock a few weeks back,” Troy Jr. said. “Although I know I have so much more to learn. I do know I couldn’t have a better group behind me. The guys at Elite Motorsports — Rick Jones and Mark Ingersoll, who are tuning the car, along with car chief Eric Luzinski, clutch specialist Mike DePalma, and our rear-end mechanic Tyler Harron, are the best at what they do. It’s been a dream scenario for me.

“I’ve been going over all the processes and procedures in my head. I’m working on listening to the car and determining what feedback I can give to help the guys. I’m also trying to be patient with everything. I have a very strong desire to do well and show everyone how much I appreciate this opportunity.”

Drag racers would give anything to have a hot rod as consistent as Mike’s JEGS.com Top Dragster has been, dating all the way back to last year’s championship run. His recent runner-up finish at the JEGS SPORTSnationals proves his success isn’t a fluke.

“I keep saying it but there is absolutely nothing to change on the car,” Mike said. “It’s just been about as perfect as something mechanical can be. It’s a real credit to Greg Cody, Tony Collier, Dave Raurk and Ryan Micke for taking so much pride in their jobs and refusing to be anything but the very best.

“I love racing at Indy. It’s another one of our ‘home tracks.’ We’ve won a bunch of times there in the past and we’d love to do it again this weekend. It’s also exciting to be racing with my brother, my nephew and my niece. We’ve always been a racing family and we love nothing better than competing together and rooting each other on.”

Paige will resume college soon as she works towards a degree at the Miami University of Ohio, where she is studying public relations and marketing. In the meantime, she’d love to rack-up a win in Super Comp, a class she’s been contesting for a few years now.

“Indy is a fabulous racetrack and I’ve already made some great memories there,” the 20-year-old Paige said. “I went with Uncle Mike last year and he won the event, while we managed to go a bunch of rounds in our car. It was a great weekend for us; one we’d like to duplicate.

“My crew chief, Justin Beaver, has my car back together since the Columbus race, where we had some issues, and we’ll be working hard to get it dialed in as quickly as possible. Thanks to everyone at JEGS.com for helping us get back to the races this soon.”