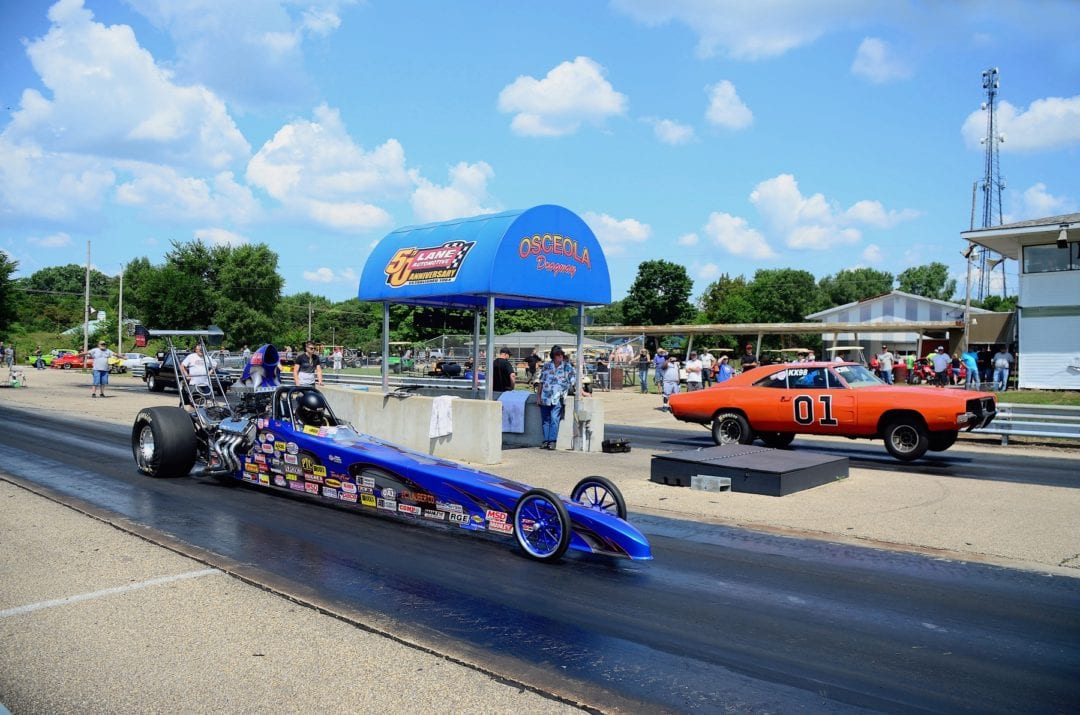 I will always remember the first time I rolled through the gates of Osceola Dragway back in 2015. I found it especially astonishing to see NHRA Top Fuel competitor Terry McMillen blending into the scenery that day and wrenching away on a front-engine nitro car parked in the grassy pit area of this time-honored drag strip tucked away in the northern tip of Indiana in the town of Osceola.

McMillen’s shop was located less than a mile from the track, and he told me he’s been coming here on a regular basis since the 1970s when he’s not on tour. To be certain, I completely dig the place, too, although with my zig-zag travels across America, it’s taken me three years to revisit this vintage facility that was built in 1957.

I’ll also never forget the day I met Ruth Chizum, the sharp-witted widow who owns and operates this track. Her late husband, Art Chizum, built the place from scratch. She and Art didn’t meet until the early 1980s, and when he told her he owned a “drag strip” on the other end of town, she didn’t know exactly what he meant, although she imagined it as some type of strip mall. Ruth can tell the story so much better than I can, and she had me rolling as she recounted her initial disappointment when she first saw the track. “Where are all the stores?” she inquired to Art. Regardless, the two fell in love and she also developed an affection for his drag strip as their years together accumulated.

When Art passed in 2000, Ruth continued operating the track. “Me and a whole lot of help,” she smiles. Her son, Tim, lives on site and cuts the grass and performs electrical work, among many other tasks. She was 83 years old in 2015 when I first visited Osceola, and I can fondly recall McMillen escorting her out onto the starting line and posing for a picture, which we used for my “On the Road” column to illustrate the original story.

Upon my return visit to Osceola last month, Ruth told me she has put the track up for sale. She’s now 86 years old, is still in fairly splendid health and is eager to see what sort of retirement activities await her. “I thought about becoming a bag lady and living on the beach!” she tells me. Her wit is as sharp as ever. She actually took a trip to the Florida Keys last year and while there, visited the former home of famed novelist Ernest Hemingway. Enamored with the experience, she has taken an interest in Hemingway’s novels and finds herself combing through bookstores in search of his works.

As for the fate of the drag strip, it’s been for sale for over a year now and so far there’s been no takers, so she continues to operate it each and every week. Hardly an event goes by that one of her regulars doesn’t walk up and thank her for keeping the track going for so long. Each and every Friday, she hosts a huge crowd of test-and-tune participants, with bracket racing every Sunday afternoon.

“I measure a good day when everyone has fun and there are no accidents. I also love it when no one argues, and if a racer loses on the starting line they don’t say it’s the track’s fault!” she laughs.

Ruth is steadfast in her belief that Osceola Dragway is what’s kept her going all these years. “Because of this track, I have an agenda each morning and a plan for the day.” Still, the notion of extra freedom to travel (and Hemingway to read), not to mention more time to attend her granddaughter’s volleyball games, is all too alluring to pass up, so the track remains for sale.

Furthermore, no visit to Osceola Dragway is complete without spending some quality time with Roger Woodruff, who’s been announcing the races here for nearly 30 years. He landed his announcing gig after he told Art, “You’re the worst announcer I’ve ever heard!” It sounds kind of mean, I realize, but you’d have to understand their relationship. Regardless, Art snaps back, “Well, if you think you can do any better, just get up there and let’s see what you can do!” Without hesitation, Roger darts up the stairs of the tower, grabs the mic and begins calling the action in furious fashion.

Previous to that fateful stunt, Roger was actually a dedicated racer here at Osceola, but wasn’t allowed to ever compete again after his mad announcing skills became public knowledge. “Art says to me, ‘You’re the new announcer effective immediately!’” Woodruff never again raced at Osceola, but instead, has been reporting to the tower for going on 3 decades. “And he never runs out of anything to say!” laughs Ruth.

Roger can also recount some classic stories about the track. Among my favorites is the one he tells about the young blonde television reporter who came out to the track to do a local story. They encouraged her to take a ride down the track in the passenger seat with one of their regulars, Alan Connors, who had a pretty fast car.

“After the ride was over, Alan says to me, ‘Roger, that woman screamed all the way through the burnout, all the way down the track, all the way up the return road and was still screaming when I let her out in the staging lanes!’” laughs Woodruff. They never saw the girl again.

Woodruff also tells a fascinating, first-hand account of how Warren Johnson used to test a mid-1970s model Pro Stock Camaro here at Osceola in the late 1970s through the early 1980s.

“This was after he left Minnesota, but before he moved to Georgia – he actually lived in Elkhart, Indiana, for a short time,” Roger recalls. “He would tow this Pro Stock Camaro on an open trailer and sit patiently in the pits until after the race was over, then he’d unload the car and make test runs. He would do this on a regular basis anytime there wasn’t a national event somewhere.”

Roger saw WJ in Milan, Michigan, a number of years later and reminded him of his little-known testing exploits.

“WJ looks at me and says, ‘You better not ever tell anyone I used to test my cars at Osceola!’ I don’t guess he minds me telling that story since it’s been so long ago,” Roger laughs.

It must have been a peculiar sight – even 40 years ago – for a Pro Stock car to be making test laps on a drag strip that used a dirt mound for a retaining wall! Osceola never even installed metal guardrails until 2001, after U.S. 131 Dragway in Martin, Michigan, gave them their old ones after installing concrete walls.

Over the years, Osceola has made improvements and updates, but it’s never came close to losing its yesteryear appeal. The track is actually more heavily promoted now than ever before, Ever since Ashley Finney began making regular Facebook updates, the track suddenly has taken on a social media presence it never had before.

Regardless, though, the racers here find themselves holding their breath as the track remains for sale. Yes, there’s a grandfather clause that allows it to remain a drag strip, although there’s no guarantees regarding its future. Only time will tell how this story unfolds, so until then, all involved will keep hoping for the best while continuing to revel in the good times, both past and present.

This “On the Road” column originally appeared in DI #136, the Crew Chief Issue, in September of 2018.