Courtney Force (Funny Car) and Deric Kramer (Pro Stock) are also No. 1 qualifiers in their respective categories at the eighth of 24 events on the 2018 NHRA Mello Yello Drag Racing Series schedule.

Millican earned the top spot with a run of 3.739-seconds at 331.12 mph in his Strutmasters / Great Clips dragster during the third qualifying pass of the weekend and first of the day. He secured his fourth No. 1 qualifier this season, the 14th of his career, and he now sets his sights on his second career Top Fuel victory.

“When I drove by the scoreboard I couldn’t believe we had such a great run, but we are all excited to have jumped from the number 16 qualifier to the top of the board,” Millican said. “I’m giddy because our cars are running such high speeds but that was just a crazy run altogether.”

Millican will take on Terry Totten in the first round of eliminations on Sunday. Points leader Steve Torrence qualified second with a 3.747 at 328.30 and is set to meet Terry Haddock in competition.

Force remained atop the Funny Car category with a run of 3.911-seconds at 321.73 mph in her Advance Auto Parts Chevy Camaro SS recorded during her second qualifying pass on Friday. The current Funny Car points leader locked down her fifth No. 1 qualifier of the 2018 campaign and third consecutive. 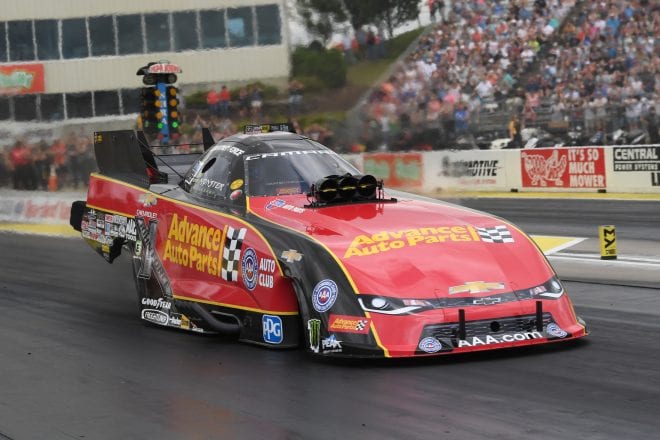 “My mindset didn’t change much despite that solid pass we had from yesterday, but we knew a lot of cars could improve their times and jump past us so we just kept pushing today,” Force said. “It’s great to kick off the weekend here at Heartland Motorsports Park in the top spot, but we are hoping for a great day tomorrow.”

Force is set to face off against Richard Townsend when eliminations get underway. Jonnie Lindberg sits at second with a 3.962 at 316.23 and will meet Jim Campbell in round one Sunday.

In Pro Stock, Kramer, behind the wheel of his American Ethanol Chevrolet Camaro, took over the No. 1 qualifying position after driving to a 6.613 at 208.42 pass during the final pair of Pro Stock qualifying. He now has two top qualifying spots on the season, after also leading the pack in Phoenix. 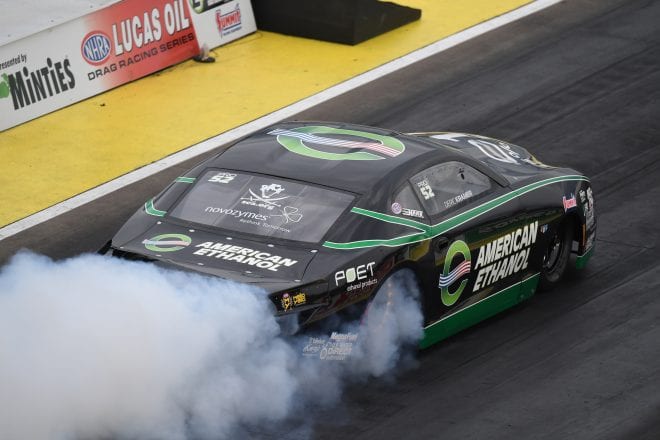 “We didn’t expect to go to the top spot going into that final run,” Kramer said. “I want to thank all of our sponsors for helping us get here, and we are excited to see what we can do when we get underway tomorrow.”