Courtney Force (Funny Car) and Greg Anderson (Pro Stock) are also No. 1 qualifiers in their respective categories at the 11th of 24 events on the 2018 NHRA Mello Yello Drag Racing Series schedule.

Millican powered to the top spot with a run of 3.817-seconds at 322.88 mph in his Great Clips/Strutmasters dragster during his second qualifying pass on Friday. The defending event winner notched his fifth No. 1 qualifier on the season, as he sets his sights on his third event victory in the past four events.

“The way our car went down the track today with some of the other teams struggling is pretty incredible,” Millican said. “This has just been a great racecar for us right now, and our goal is to put four good runs in a row together for tomorrow.”

Millican matches up with Terry Totten in the first round of Sunday’s eliminations.

Tony Schumacher slotted into second in Top Fuel qualifying with a 3.830 at 323.66 in his U.S. Army dragster as he prepares for Terry McMillen in round one.

Force remained atop the Funny Car category lead with a pass of 3.993 at 325.92 in her Advance Auto Parts Chevrolet Camaro recorded during her second qualifying run Friday, as she was the only driver in the class to run under the four-second mark during the two days of qualifying. The current points leader secured her seventh No. 1 qualifier of the year and fifth in the past six events. 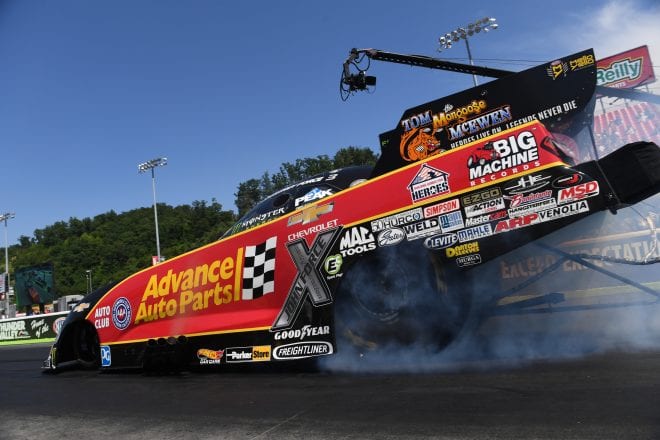 “This has been a great start to the season for my team, we have a good thing going and we are really excited with the direction our season is headed,” Force said. “We have a few wins and are in a good spot with the points lead, but we know we have to stay focused one round at a time to keep this success going.”

Force will face off against Jonnie Lindberg in the first round.

J.R. Todd sits in second with a 4.072 at 313.15 in his DHL Toyota Camry during the second qualifying session on Friday, as he is slated to take on Del Worsham on Sunday.

Anderson held on to the lead in the Pro Stock class after driving to a 6.674 at 205.35 in his Summit Racing Equipment Chevrolet Camaro during his second pass on Friday. The four-time world champion locked in his seventh No. 1 qualifying spot of the season and the 100th of his career.

“Getting to 100 No. 1 qualifiers has taken a lot of hard work and late nights, but it’s a team award and we are definitely going to celebrate this milestone,” Anderson said. “We know it’s going to be hot and rough out there, so it’s going to come down to who can handle this track best on race day.”

Anderson will take on Wally Stroupe in the first round of eliminations.

Jeg Coughlin Jr. finds ended up qualifying second following his 6.683 at 205.22 in his JEGS.com/Elite Performance Chevrolet Camaro during the second session on Friday.

Eliminations begin at 12:00 p.m. on Sunday at Bristol Dragway.