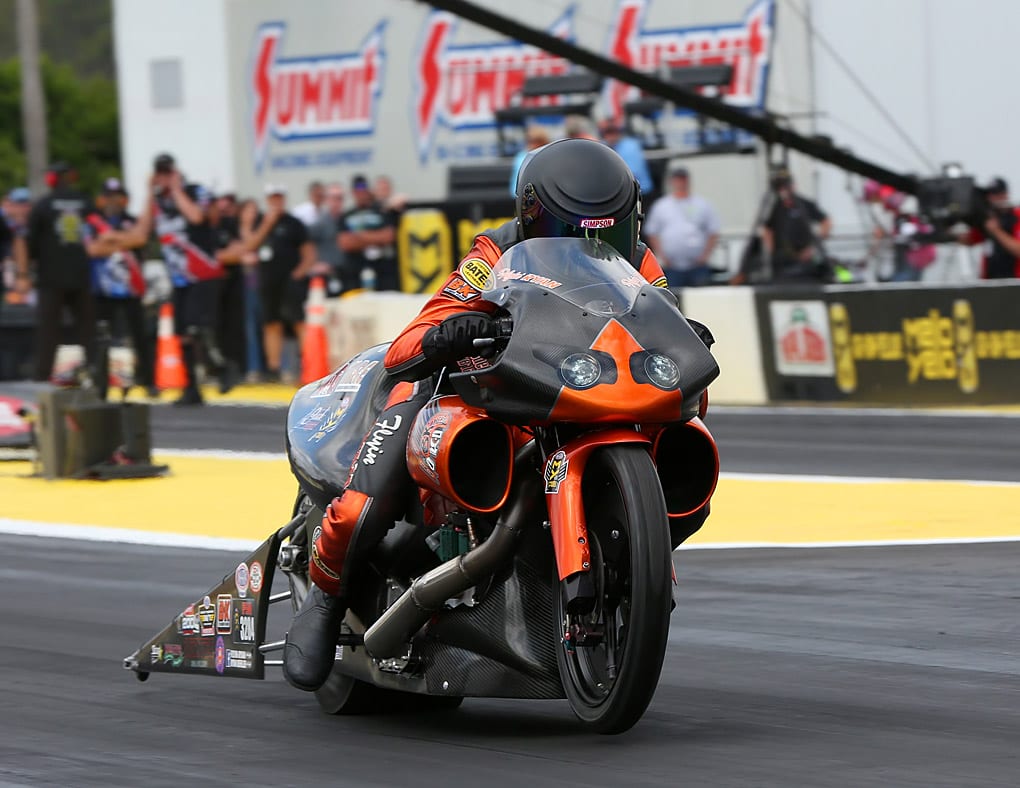 “My first time up there was with a buddy,” said Oehler. “I was 16 and had a Camaro SS. I did a big burnout all the way up to the starting line. The starter comes up and taps on my window. I roll it down, and he looks at me and says ‘Son, you are NOT John Force. If you do this again, you’re outta here!’”

Now as a National Hot Rod Association (NHRA) Pro Stock Motorcycle (PSM) racer, Oehler may not line-up directly against Force’s Camaro Funny Car, but he does race as a professional on the same big stage—one that’s broadcast nationally on Fox. And the stage for this weekend’s stop on the Mello Yello circuit is that very same Route 66 for the Jegs Route 66 NHRA Nationals.

No longer a teenager, 34 year-old Oehler is a candidate for NHRA’s Road to the Future award—the drag racing organization’s version of Rookie of the Year. 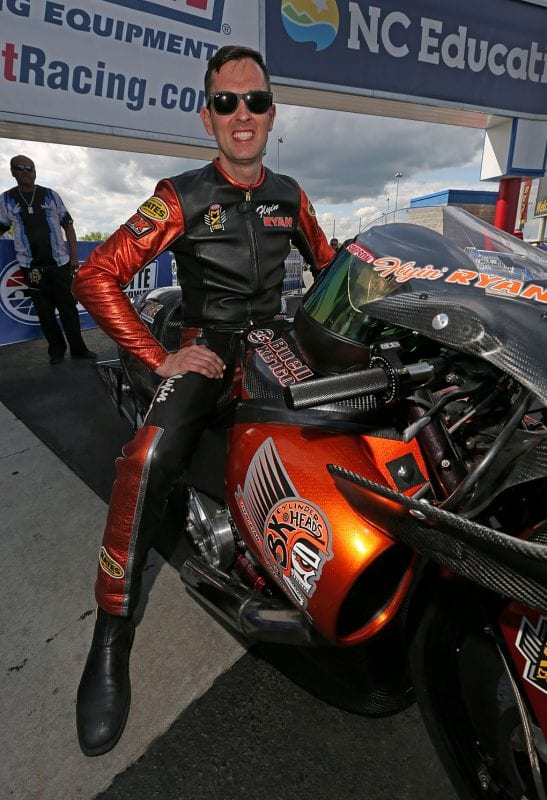 The two-time American Motorcycle Racing Association (AMRA) Pro Modified champion has moved up to the NHRA ranks fulltime this year’s and is doing very well indeed. He and his team have qualified solidly at all events and was in the pair that ousted four-time PSM champ Eddie Krawiec in round one of the Four Wide Nationals at Charlotte.

“We feel positive,” said Oehler. “We know we’re competitive, and we know we can put better numbers up than we are. We’ve had some very bad 60 foots, so if we put our quickest short numbers together with our quickest back-half, we’ve got a very fast bike. We’ve just gotta do it.”

Oehler’s original teenage plan was to become a track and field star. “Then I was in a really bad car accident when I was 17. That changed my focus in life. Up until then I was a pole-vaulter. But when that happened, I pretty much had to change my focus on a competitive outlet.

“My first run in the Camaro was a 13.90 and I was tickled as sh*t. At the beginning I would just drive my car up to Route 66, camp out, and started bracket racing, doing the Super Chevy shows.”

Oehler then turned his attention to Pro Modified Harley racing—an out-the-back-door performance class that returned bigger thrills for the dollar than car classes can match. And now with an S&S-powered Buell in PSM, Oehler knows that his budget increase had better be matched with an increase in his own performance.

“As far as my riding, I’m feeling more confident every time I go out. For us it’s always just showing up and doing a little bit better, and I think that we’re doing that. I got my first ever top 10 bonus check after Charlotte, so that was cool.”

The Flyin’ Ryan team’s performance this far has secured the sponsor funding to keep this train rolling through the entire season, and keep crewman Alexander Tutt on the road with a new rig while Oehler handles a major life event that presented logistical problems with his NHRA travel schedule—his wedding!

“My fiancée Laura Griffin and I are getting married in July, and I’ll be getting back from our honeymoon just in time for the Denver race.”

Oehler and his father/crew chief Brad are also busy running a Bloomington, Illinois-based HVAC business. “With working hard on the job, setting up a new race shop, doing a lot of testing, and working late every night when we’re at the track—I can definitely tell you we’re working as hard at this as anybody out there. We just don’t know any other way. We always do better under pressure.”

And what more pressure could you ask for than racing in front of family and friends—and the Fox TV cameras—in the stadium bowl of Route 66?

Expect Oehler to meet the challenge this weekend and all season long on his Road to the Future quest.