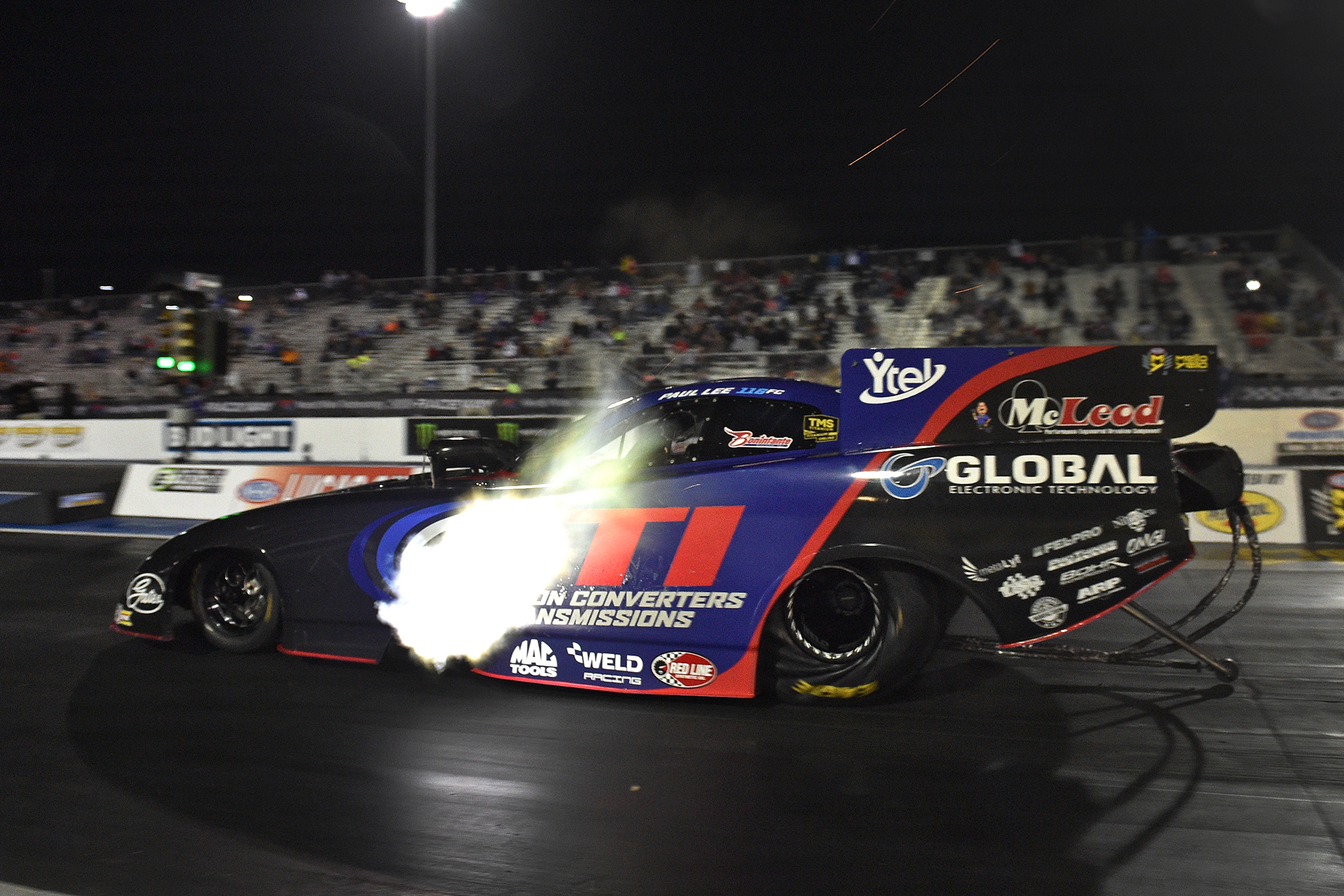 Wearing a green NHRA hat for the first time in his Funny Car career, you could almost see the smile through Paul Lee’s mask on Saturday at brisk World Wide Technology Raceway in St. Louis.

After pushing through one rain delay after another – which put off qualifying nearly eight hours on Saturday – Lee made his lone run count, vaulting to the No. 1 spot under the lights with an impressive pass of 3.913-seconds at 326.95 in his 11,000-horsepower FTI Performance Dodge Charger at the NHRA Midwest Nationals in St. Louis.

It gave Lee his first career No. 1 qualifier in Funny Car – and a green NHRA hat to go with it – along with a joyous reaction in the moments that followed.

“I’ll tell you what, you can’t see the size of this smile, but it’s out to here,” Lee said with his mask on.

He was pointing with both fingers wider than his face, a sign that he was overjoyed with the fabulous run and the No. 1 qualifier status. Scheduled to run much earlier in the day, intermittent rain pushed back the lone qualifying to around 8 p.m. That meant running under the lights for the first time in a wild, unprecedented 2020 season, but a mid-60 degree race track also made for tricky conditions.

Only Lee, Alexis DeJoria and Cruz Pedregon made full runs during the qualifying session, and Lee quickly credited crew chief Jim Oberhofer and his standout team for making the perfect call in challenging conditions.

“There’s not a lot of time we get to go down a 65-degree track. Jim O and the boys put a good tuneup in it and it stuck, so we’ll take it,” Lee said. “Jim O makes a great car for us, I can’t say enough. These guys put the car together and they do a great job.”

Lee remained confident he could get down the track throughout the day and it paid off with the marquee position to open eliminations. He hopes to use that momentum and turn it into his first career NHRA Funny Car win. It would be the perfect boost to a 2020 campaign that has been severely hampered by the COVID-19 pandemic.

Rain reared its ugly head on Saturday, picking back up at least twice when teams were ready to race. It meant more sitting around, but Lee and his team were ready when they needed to be. He’s confident that will carry over to Sunday, where Lee hopes he’ll be smiling with a white hat — which are awarded to the winners — and a Wally in hand.

The first step took place on Saturday evening and Lee would be perfectly fine with replicating that run four times during eliminations.

“The track conditions and waiting around all day, the rain on and off — we were trying to run for literally 7-8 hours,” Lee said. “But I tell you what, I was hoping we would get a run in. It’s not too cold — it’s right on the edge — and we were saying it would be nice if we could get a run in. We couldn’t be happier. It was a great run, and Jim O and the guys on the team were great. It was hauling butt the whole way. It had all eight (cylinders) on it the whole ride.”