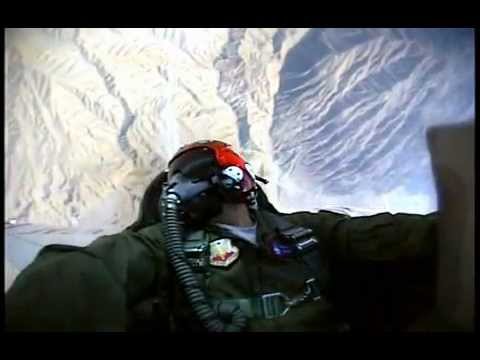 When Jeg Coughlin Jr. clinched his fourth Pro Stock championship with a victory in the fall of 2008 at Las Vegas Motor Speedway, his most memorable reward was a thrilling flight with the United States Air Force Thunderbirds Air Demonstration Squadron.

“That was maybe the wildest thing I’ve ever done,” said Coughlin, who took the flight just two days after locking up the Pro Stock title. “Certainly, it was a once-in-a-lifetime opportunity and something most people can only dream of, but I must admit it was more than a little intimidating.

“When you see a fighter jet zoom by overhead, which happens every few minutes at the Vegas track with Nellis Air Force Base just across the way, it always makes you wonder what it would be like to be in the plane itself. It’s like, ‘Man I’d do anything to take that ride.’ But when the situation actually presents itself, it’s a different story.” 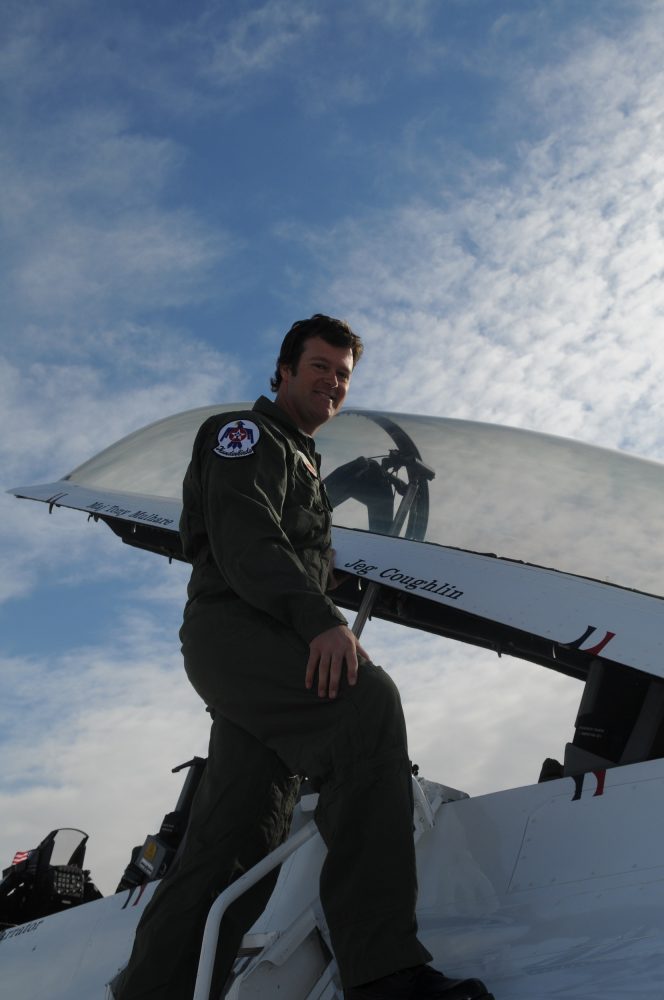 “Our buddy Bear presented us with the opportunity earlier in the year and my initial reaction was, ‘Heck yeah, I’ll do that.’” Coughlin said. “About two months later I received a host of paperwork where you are basically signing your life away. That’s when reality sets in that this isn’t going to be without risk. It’s not the same as an amusement park ride where 99.999% of the people get off without any issues.

“I put a lot of thought into it at that point. I mean, you know you’ll be flying with one of the best pilots in the world on a perfectly maintained airplane, but at the same time it’s a tad more risky than say a ride at Universal Studios. Ultimately, I couldn’t pass it up and I signed all the releases.”

With the stress of the championship occupying most of his thoughts, Coughlin didn’t spend much time worrying about the ‘what-if’s’ until the Vegas race was over and the championship was in hand.

“We celebrated a little bit Sunday night but knowing my flight was early Tuesday morning I had to quickly shift into the recommended preflight ritual they had suggested,” Coughlin said. “They want you to eat the right things, sufficiently hydrate and get a good night’s rest, as best as that can happen when you know you’re going for a ride with the Thunderbirds.

“We needed to be at Nellis at 0600 Tuesday morning and I can tell you the nerves hit me pretty hard when we pulled in the gates. There was no backing out at that point.”

Like other celebrities and select dignitaries who have flown with the world-renowned squadron, Coughlin had lots of preflight meetings and briefings to prepare him for the experience ahead. 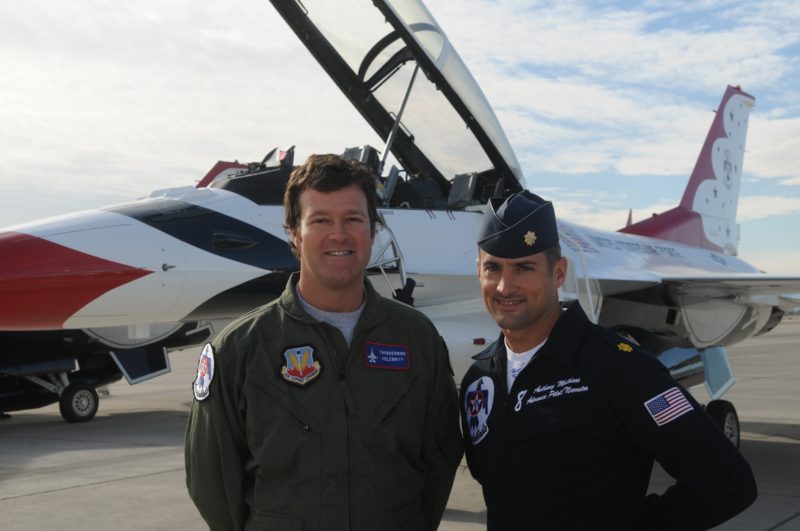 “The first stop was with an Air Force doctor who checked me out physically and had me sign my life away a few more times,” Coughlin said. “I then met with the incredible pilot I was paired with, Major Tony ‘Split’ Mulhare, who took me through the flight plan and what we were going to attempt. As you might expect, he was a great guy, very professional and confident. He eased my concerns.

“You are then outfitted with a flight suit/G-suit and you practice the breathing techniques you need when the jet is pulling Gs. That gets you worried again. I didn’t want to be the guy that passed out or got sick but you just don’t know how you’ll handle it. There’s no way to prepare for those kind of G-forces.”

After a last-minute bathroom break and some more fluid intake, it was time to roll and the full military precision of the entire Thunderbirds flight crew was soon on full display.

“Everything they do is perfect,” Coughlin said. “Every movement is choreographed to the inch and you feel really special walking out to the taxiway with all those professionals doing their jobs so precisely. Of course, Tony just had this little stick ladder to climb into the cockpit and I had this big ol’ ladder but we were quickly strapped in and given a thumbs-up to go.

“The first thing I noticed as I was getting situated was how small the jet seemed. I mean, you could barely see the wingtips. You’re used to being in commercial planes where there’s lots of space but those fighter jets are built differently, for sure.”

In a flash, the plane was revved up and Major Mulhare pointed it to the runway.

“You get that final thumbs-up from the ground crew and you’re off,” Coughlin said. “Brandon Bernstein had flown with the Thunderbirds and he told me the pilot was likely to go straight up as soon as we were airborne. He said remember to look over my shoulder and watch the city of Las Vegas shrinking to the size where it could fit into a glass. He was right. It happened very quickly. 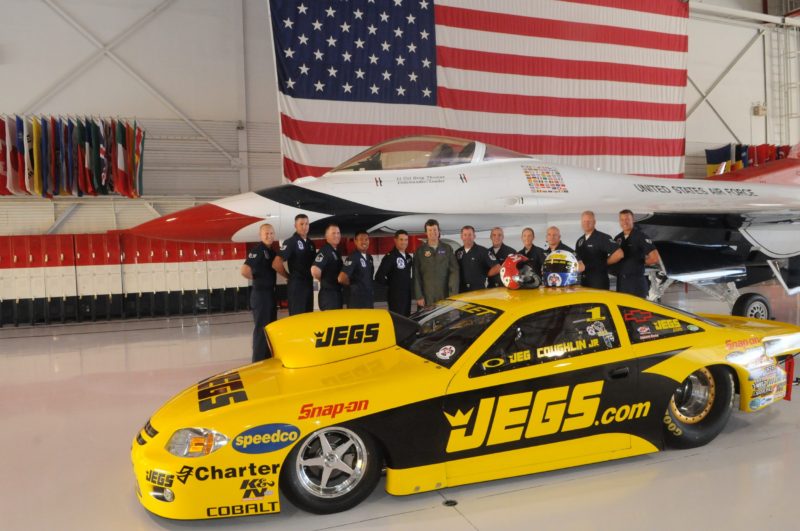 “We reached 10,000 feet in just a few seconds then leveled off and headed to the training grounds out in the desert. We did a full series of acrobatic maneuvers, smooth rollovers, eight-point rollovers, backflips, you name it. Then we got down on the deck, just a few feet off the ground, and buzzed this staged old pickup truck they had placed out there at 400-plus mph, blowing up dust the whole way.

“At one point we did the big G-pull where you just know they’re trying to get you to pass out or lose your lunch but the pressurized G-suit and the breathing exercises I’d learned kept me alert and conscious. We maxed out at 9.3 Gs. It was quite a deal.”

Burning up fuel, the duo were soon headed back to Nellis.

“On the way in ‘Split’ took me right over The Strip at Las Vegas Motor Speedway upside down and made note of our championship, congratulating the team,” Coughlin said. “It was a very cool moment. In hindsight, I probably got myself too worked up ahead of time and didn’t enjoy everything as much as I could have. Even so, it was a very special day, something I’ll never forget.

“When we landed we taxied right into a hanger and they had set up our JEGS.com racecar right next to the lead Thunderbird jet and I think that might have been the most patriotic moment of my lifetime. It was incredible. The whole thing was incredible.”