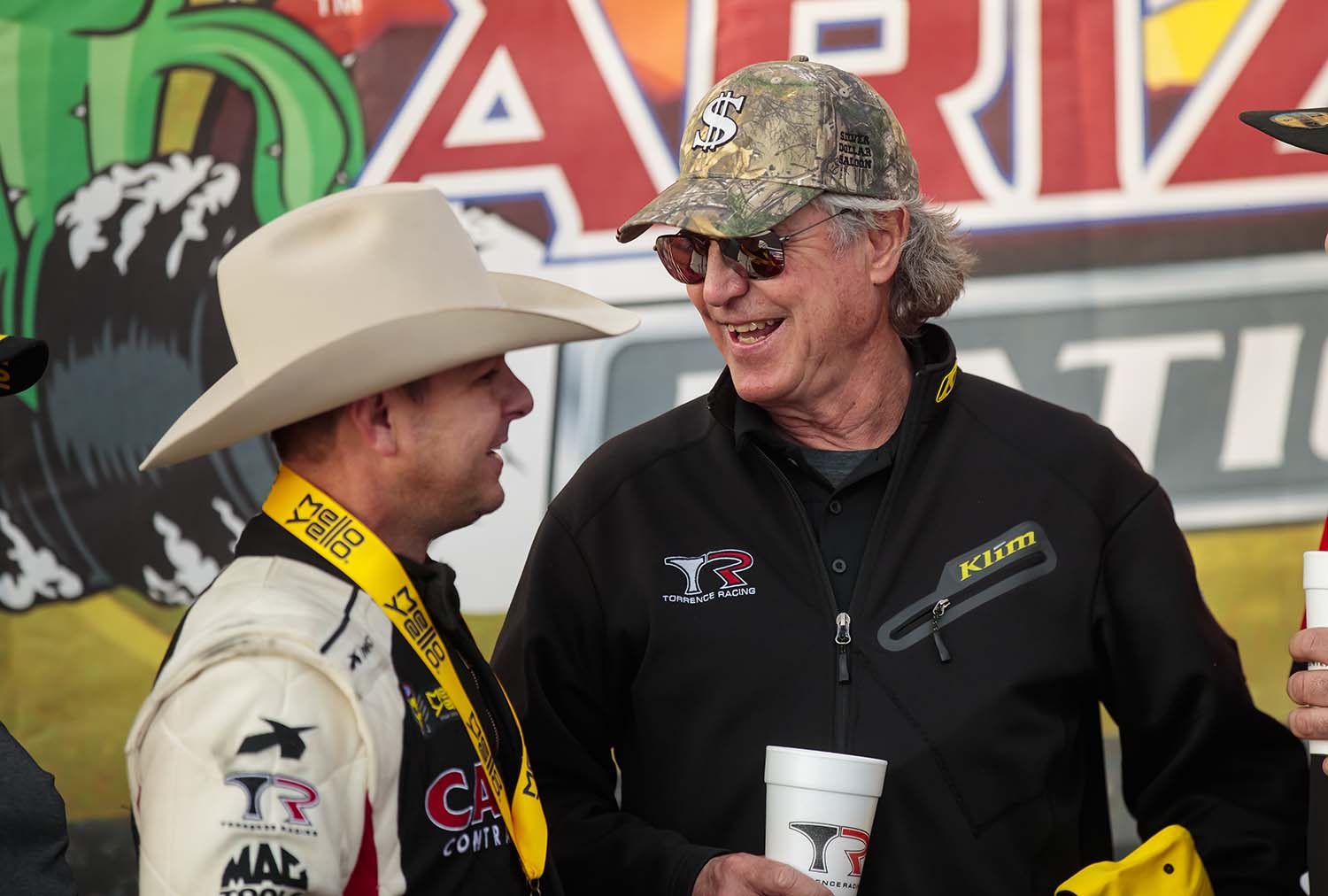 After a four-and-a-half-month hiatus during which he got married, celebrated a birthday, reconnected with friends and family and focused his energy on Torrence Land and Cattle Co., the business to which he likely will gravitate once his racing career is done, Steve Torrence climbs back into the cockpit of his Capco Contractors dragster this weekend as the Top Fuel favorite in the E3 Spark Plugs Nationals at Lucas Oil Raceway.

“When you’re racing every week, there’s only so much you can do,” Torrence said, “so the time off was good from that respect because we got to do a lot of things we wouldn’t have done otherwise. We got to do things on the ranch, working cattle, a little team roping, boating, lots of outdoor stuff that my wife Natalie and I both enjoy.

“Ropin’ has become one of my passions,” he admitted. “Going head-to-head with Tuf Cooper (a National Finals Rodeo World Champion) was a heck of a lot of fun, but for the last couple weeks I’ve been really ready to go back racing.”

Indeed, while he had no problem filling his dance card during the break mandated by the COVID-19 pandemic, the 37-year-old cancer survivor has grown increasingly anxious to rejoin crew chiefs Richard Hogan and Bobby Lagana Jr. and his other “Capco Boys” in pursuit of a third consecutive Mello Yello world championship.

In his eyes, the crew that prepares and maintains his dragster is the best in the business, a premise supported by the fact that Team Capco has celebrated 35 wins in its last 75 tour starts dating to 2016, the most recent coming in last February’s Arizona Nationals, the last event completed before racing was suspended.

“It’s like any sport, any business, anything you see that is successful,” Torrence said of his team. “It doesn’t take all-stars to do it. Not that we don’t have all-stars, because we do, but really it just takes a great group of guys that works well together.

“We have basically the same guys we started with when we started Torrence Racing and that continuity and cohesiveness is huge,” he said. “When they’re working on that race car, they’re not talking and they’re certainly not worrying about what the other guy is doing because each and every one of them trusts and knows that that other guy has got his job done and that if they need help, he’ll be there for them.” 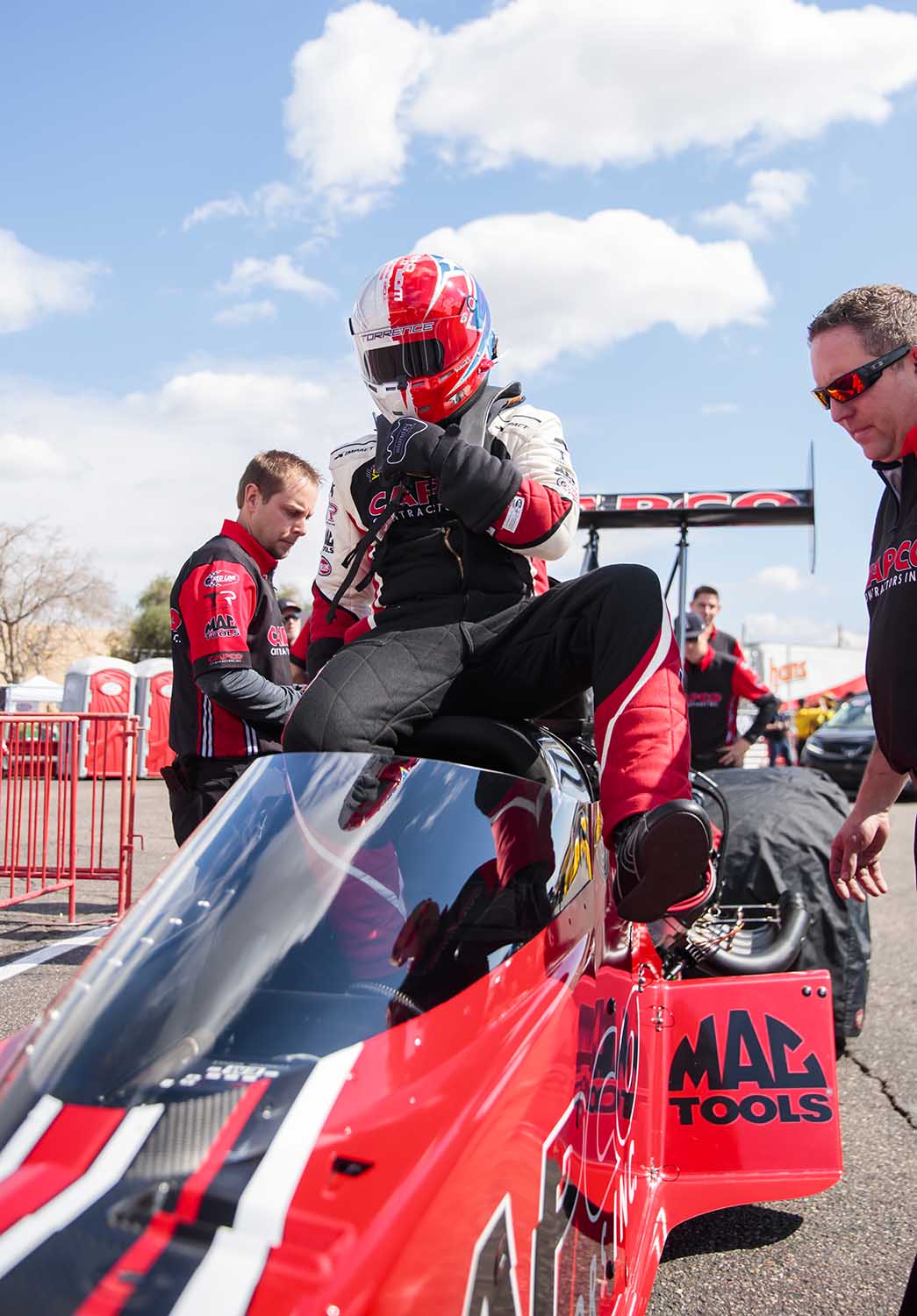 Torrence’s record at Lucas Oil Raceway, which hosts the first two races in the revised schedule, is an imposing one. In 16 races at the Indy track (in both Top Fuel and Top Alcohol), the talented Texan has gone to the final round eight times with three wins including one in the final Traxxas Nitro Shootout bonus race ever contested.

“Anytime you’re at Indy, it’s special,” said the man who’s won 37 NHRA tour events since putting the team together in 2012, “so I can’t think of any place better to jump-start the rest of the season.”

The sport’s dominant driver will be joined this week by his dad Billy, a formidable challenger in his own right at the wheel of a second Capco Contractors entry.

“My dad is probably one of my biggest rivals,” Torrence admitted. “We’re both really competitive, no matter what it is. Plus, I live across the street from him (in Kilgore, Texas) and I work with him six days a week (at Capco, the family-owned oil-and-gas pipeline construction and maintenance business).

“So, the deal is, all the guys at the office, they really want him to kick my butt so they can give me crap about it all week,” he laughed. “’Aw, hell,’ they tell me, ‘if your dad was to race all the time, he’d kick your butt all the time.’”

In fact, racing only a part time schedule, the elder Torrence finished fifth in the 2019 Top Fuel driver standings, winning four times and beating his son in the final round of the AAA Insurance Midwest Nationals at St. Louis. Moreover, he is the track record holder for speed at Lucas Oil Raceway at 333.33 miles per hour.