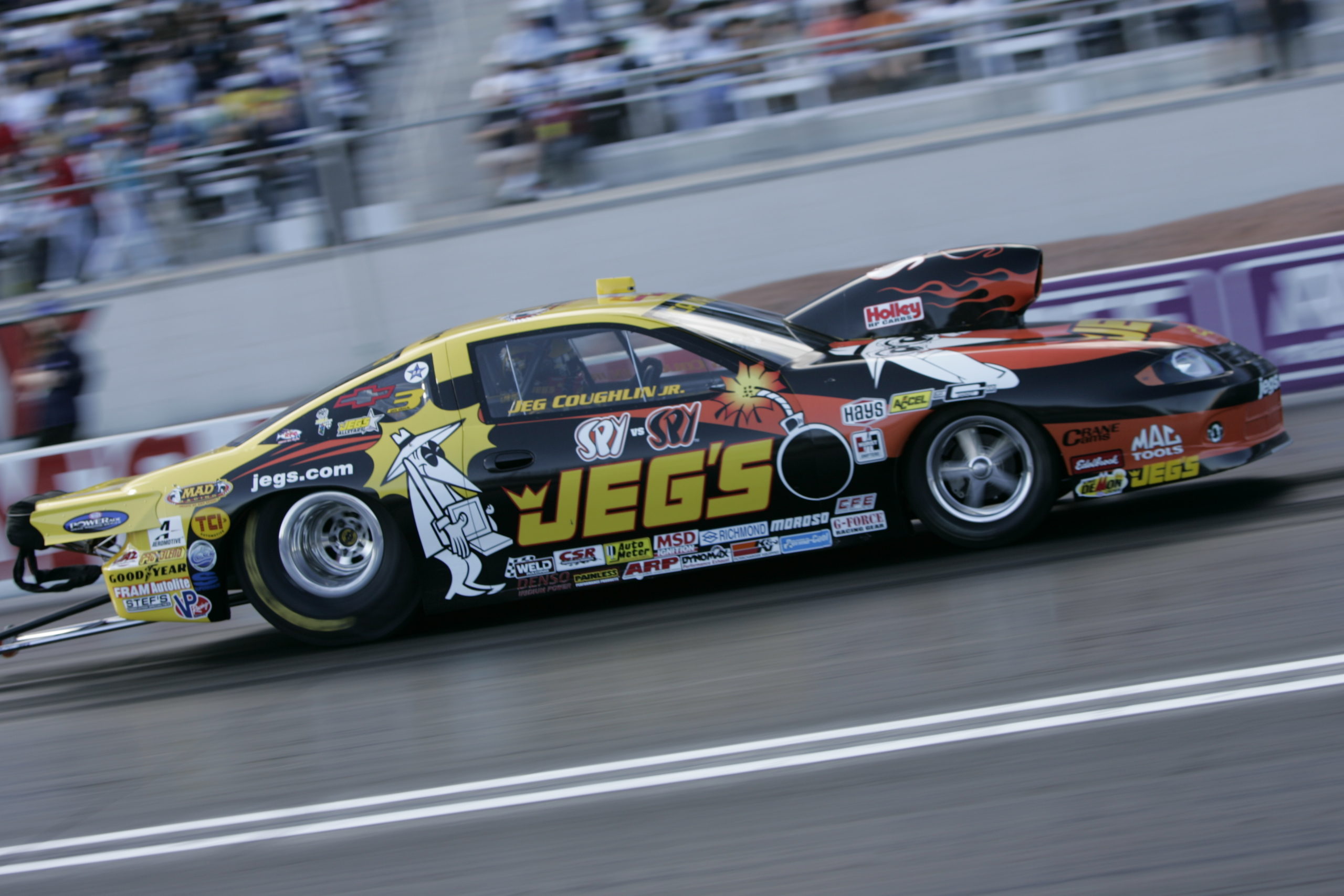 Late Baby Boomers and early Gen X’ers grew up reading Mad magazine and tried their best to live out the famous words of its fictional mascot Alfred E. Neuman, whose “What, me worry?” motto defined a generation of American youth.

For Jeg Coughlin Jr., the five-time NHRA Pro Stock champion who plans to retire from full-time competition at the end of 2020, a chance to have some fun and represent the mischievous comic book brand in 2004 was simply too good to pass up. In the end, the one-off Spy vs. Spy design his team ran at the second Las Vegas race in 2004 turned out to be an all-time best seller.

“Comic books were really big when I was a kid,” Coughlin said. “And, of course, everyone knew Mad and their freckle-faced, gap-toothed cover boy Alfred E. Neuman. Every time there was a presidential election they’d put him up as a write-in candidate and he’d always get votes.

“I do remember when the idea for the Spy vs. Spy car came along it was the first time we contemplated doing a design that wasn’t JEGS oriented. Woody (Scott Woodruff, director of media and motorsports at JEGS) had met with our fellow Ohio native Fred Wagenhals, who was the CEO at Action Performance, along with his right hand man Steve Cole, and together they cooked up the idea of running a Mad magazine-themed car. After lots of different ideas, they came up with the Spy vs. Spy set-up and the rest is history.”

Spy vs. Spy was a sub-section of each issue of Mad magazine featuring two opposing stereotypical “spies” — one dressed in black and one in white — involved in sinister activities against one another. Their pranks usually involved booby-traps and/or bombs.

“The design Fred, Steve and their people came up with was just perfect and it really resonated with the fans,” Coughlin said. “The moment we unveiled the mock-up and announced we’d be running the car in Vegas 2, the response was over-whelming. We knew we’d hit on something big before the car ever made it to the track.”

As Woodruff reflected on the creation of the car, he still marvels at how they managed to put it all together.

“The first thing you have to remember is that in 2004, doing car wraps was still a very new idea,” Woodruff said. “Nowadays, teams can efficiently change wraps from one weekend to the next with no problem. Plus the vinyl is all cut to precisely fit the car. Back then when we did the Spy vs. Spy car, it was a completely different deal.

“The guys from Pro Cal in Charlotte came up to the shop with these giant, flat sheets of material and just started cutting it up and applying pieces to the car. They would use heat guns to warm it up and stretch it to fit. As a guy that’s applied a few stickers to racecars over the years I was amazed. In the end, it was absolutely perfect.”

Adding to the excitement of the pending unveiling of the car, Coughlin and Woodruff commissioned a Spy vs. Spy firesuit and helmet.

“We had the full get-up and as we expected, it was a big hit with the fans,” Coughlin said. “Everyone wanted a picture with that car and to date, I’m pretty sure we sold more collectable cars with that design than any other. It really spurred us on to do more one-off cars going forward because we saw first-hand how popular they were.

“I sure wish we’d put that one in the winner’s circle. We only ran it that one race and I didn’t get a win that weekend. But the car was a winner, for sure.”