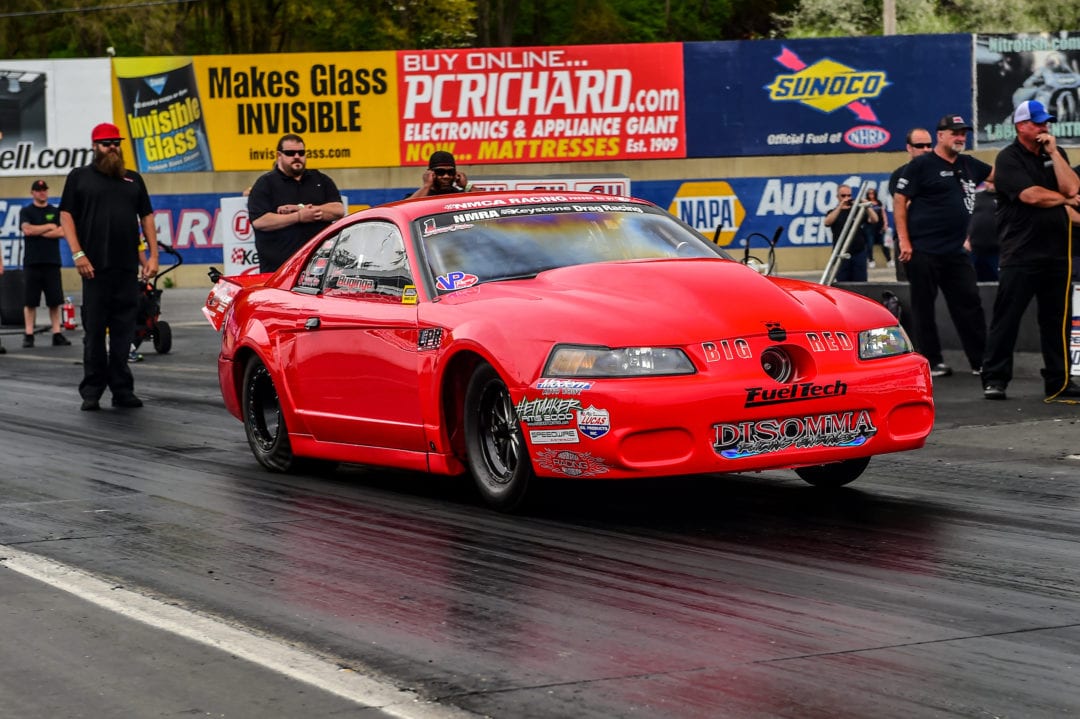 On the same weekend that the largest horse race was going down in Kentucky, it was the mechanical horses of the NMRA that rocked the rolling hills around Maple Grove Raceway (Reading, PA). Despite the threat of rain for the third straight year, NMRA officials accelerated the racing program and completed the 18th running of the CJ Pony Parts NMRA Ford Motorsport Nationals, presented by Vortech Superchargers, a day earlier than scheduled. The short schedule didn’t short-change the fans as the racing was fast-paced on and off the track and all but four categories completed their elimination rounds.

VP Racing Fuels Street Outlaw saw Manny Buginga climb back to the top of the category he helped define. With help from Mustang drag racing legend Dwayne Gutridge and crew chief Josh Ledford, Buginga spent two days pushing his turbocharged 2003 SVT Cobra quicker and quicker. He found himself in the final round against current points leader and top qualifier Andy Manson, who has been nearly unstoppable in 2018. Both Mustangs are powered by DiSomma Racing Engines powerplants, but both supply the boost different. Buginga relies on a Garrett GTX 98mm turbocharger while Manson sports a ProCharger F-1X-12R. Buginga used his starting line prowess and left with a .023 light, which proved to be the deciding factor. “Big Red,” as Buginga’s Cobra has been nicknamed, streaked to the finish line first with 4.309 at 170.39 mph run to Manson’s quicker, but losing, 4.292 at 170.13 mph. 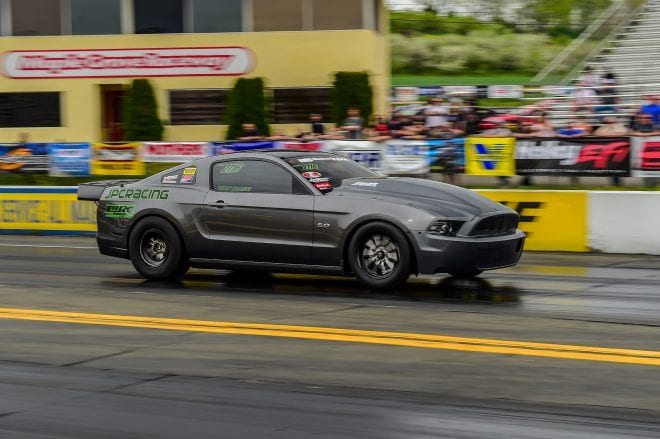 Tony Hobson raced into the Aerospace Components Winner’s Circle for the first time while competing in Edelbrock Renegade. Operating out of the JPC Racing camp, his crew chief Eric Holliday was remote tuning the AEM Infinity controlled, turbocharged 5.4L but that didn’t slow him down one bit. Hobson qualified second thanks to a career-best of 7.374 at 187.18 mph, a tick behind Brian Mitchell who ran 7.364 at 185.38 mph to top the ladder. It was a meeting of the number one and two qualifiers in the finals. The race was over just as quick as it started—Mitchell smoked the tires while Hobson unleashed a 7.370 at 187.08 mph to grab the victory.

Haley James raced to her second victory of 2018 in ProCharger Coyote Modified thanks to her competitor, John Kauderer, lighting the red light. However, he would’ve had a hard time topping the 7.616 at 181.94 mph that James posted in their pairing. Kauderer did climb to the top of the ladder thanks to a 7.602 at 178.85 mph and slowed up to a 7.646 at 178.26 mph in the finals.

Make it three-in-a-row for Kelly Shotwell in Steeda Limited Street, a class that continues to grow in its first year as a championship category. He stumbled through the first two rounds of qualifying but fixed his issues to take the number one position thanks to an 8.854 at 155.78 mph. He has some competition as Chad Wendell and Sondra Leslie both pushed their Vortech-powered cars into the 8s for the first time this year, joining Michael Ciborowski and Shotwell in the 8-second club. Wendell found himself in the finals and on the bumper, allowing Shotwell to slip by and celebrate, once again, in the Aerospace Components Winner’s Circle.

Richmond Gear Factory Stock got down to the final round before the rain halted the competition and the class will be completed during the NMRA SuperNationals at National Trail Raceway the weekend of June 7-10. It will be Louis Sylvester taking on Dan Ryntz when the racing resumes next month in the classic old vs. new 5.0 battle! G-Force Racing Transmission Coyote Stock is another category cut short by the rain and the three racers that are left in competition are Darin Hendricks, Jacob Lamb, and Steve Kurlmchak.

The two index categories that were whittled down the final rounds but not completed were Exedy Racing Clutch Modular Muscle and ARP Open Comp. In the Modular Muscle final it will be Jason Henson looking to win two straight events and is facing Don Bowles and his AmeriGas-sponsored 2005 Roush Mustang. The Open Comp final features two veterans in the index eliminator—Saul Walker and Michael Lewandowski. 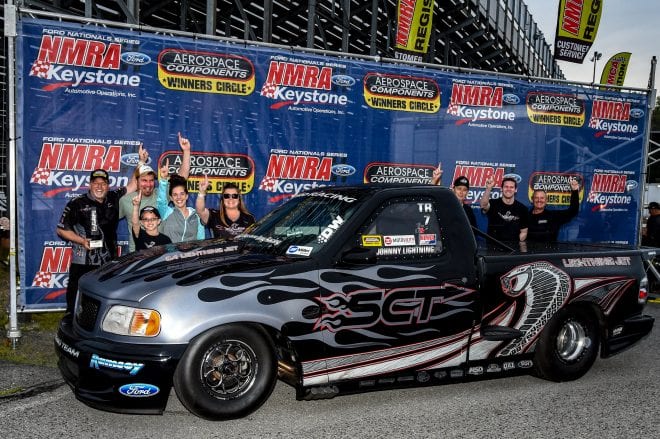 “Lightning” Wiker, who has competed in every season. Maple Grove Raceway is practically a home track for Wiker and he took home the win in Detroit Locker Truck & Lightning. The 8-second “Lightning Jet” truck beat the defending champion Randy Conway and his Coyote-powered Ranger. Robert Ball, formerly of QA1 True Street fame, took home his first ROUSH Performance Super Stang victory in just his third event in the category. He topped Miles Wagoner in a double breakout victory—10.708 on a 10.74 index, while Wagoner was the bigger offender with a 10.256 on 10.30 index. 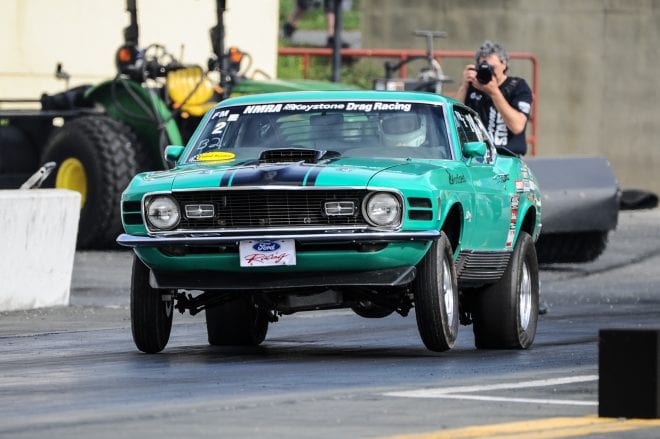 In Race Star Wheels Ford Muscle, David Mormon made the long trip from Florida worth it as he cruised into the Aerospace Components Winner’s Circle thanks to an 11.028 on 11.00 index, besting John Butsko and his 1963 Falcon. Butsko ran 12.275 on a 12.25 index and the major difference was Mormann’s .030 advantage on the starting line.

Mike Jovanis became an 8-time QA1 True Street winner by securing the victory with an awesome 8.113 average. The New Jersey racer began his journey to the Aerospace Components Winner’s Circle with a 7.969 but bettered that run with a 7.816 in round two. A stutter on the starter line slowed him to an 8.553, but it was enough to take the win by a wide-margin. Michael Corrin was the runner-up finisher with a 9.454 average and Tim Schmoyer was the 9-second winner. Other wins came from Joseph Cascio (10-second), Nathan Seagrave (11-second), Chris Nusbaum (12-second), Trish Linkus (13-second), Christian Cornwell (14-second), and Jonathan Plumber (15-second).

The Super Ford Bracket Showdown was cut short because of the rain, cancelling the king of the hill shootout on Sunday. NMRA officials, however, doubled the purse on Saturday in all four bracket racing categories. The winners included Gary Simpers (Fast Ford B1), Matt Riccheza (Quick Ford B2), Jay Fitts (Street Ford B3), and Ray Goelz (Nostalgia Ford B4).