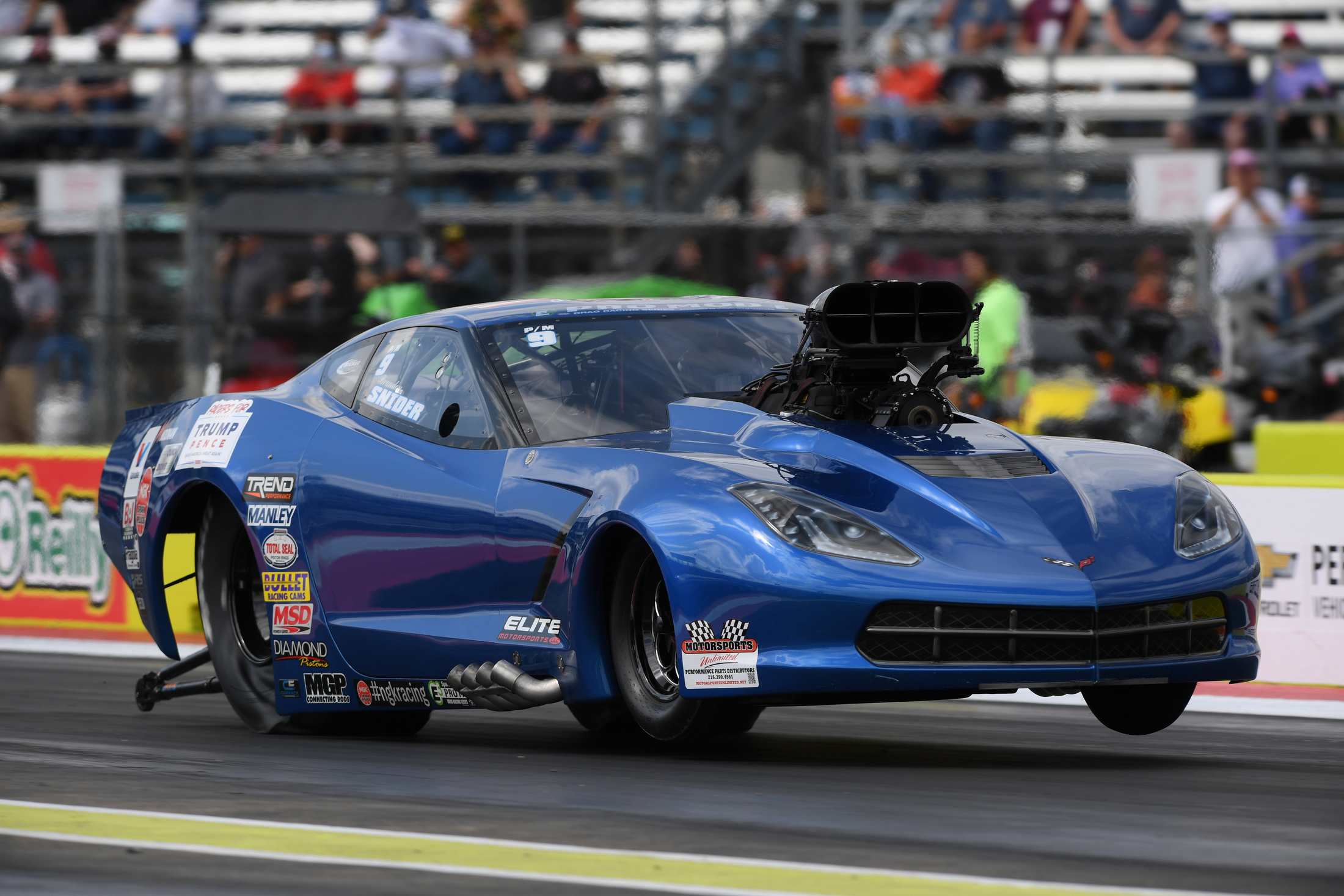 Brandon Snider finds himself in an ideal position heading to the final race of the 2020 season at The Strip at Las Vegas Motor Speedway in the E3 Spark Plugs NHRA Pro Mod Drag Racing Series presented by J&A Service. But after a number of recent firsts, the points leader insists he isn’t feeling the pressure.

Snider is in the driver’s seat in is supercharged Corvette heading to the finale, taking the points lead into Las Vegas against a host of contenders. He currently leads defending world champion Stevie “Fast” Jackson by 26 points, or a little more than one round, with a handful of drivers lurking closely behind. Mike Janis and Khalid alBalooshi, both former world champions, are 55 and 56 points behind Snider, respectively.

Things came together perfectly for Snider, who won his first career race in the class two races ago and has qualified No. 1 in two of the past three events. It’s put him in a great spot to claim a title in what has been a breakout year, but Snider said he’s simply enjoying the moment.

“I don’t think I’m feeling any pressure,” Snider said. “I’m not really worried about (the championship). We were just thinking about winning a race and getting our program better. That’s what our goal was this year, so we’re not going to think a different way now. We’re just going to go out and do the best we can. I get more enjoyment out of the people that help enjoying this because I like giving back to them. I get so much enjoyment out of that.”

The race, which is presented by Strutmasters.com, is the seventh and final race of the 2020 E3 Spark Plugs NHRA Pro Mod Drag Racing Series season and will be shown on Fox Sports 2 (FS2). Jackson is the defending winner of the race, rolling to the victory a year ago in Vegas to cap off his dominant championship season.

It’s been a more difficult road in 2020, as there have been six different winners in the six races, including three first-time winners, but Jackson has often impressed the most in pressure situations. Should he put together another impressive weekend in Vegas, a second straight world title in the talent-filled class could be his, and that’s exactly the plan for Jackson in his supercharged Bahrain 1 Racing Camaro.

“When you are competing at this level and get to roll into the last race of the season with a chance to walk away with the title, it’s been a pretty good year,” said Jackson, who has one win this year and 10 in his career. “We haven’t been running as well as we should, but I’m pushing all my chips onto the table in Vegas. It’s going to be a shootout and I’m fully loaded.” 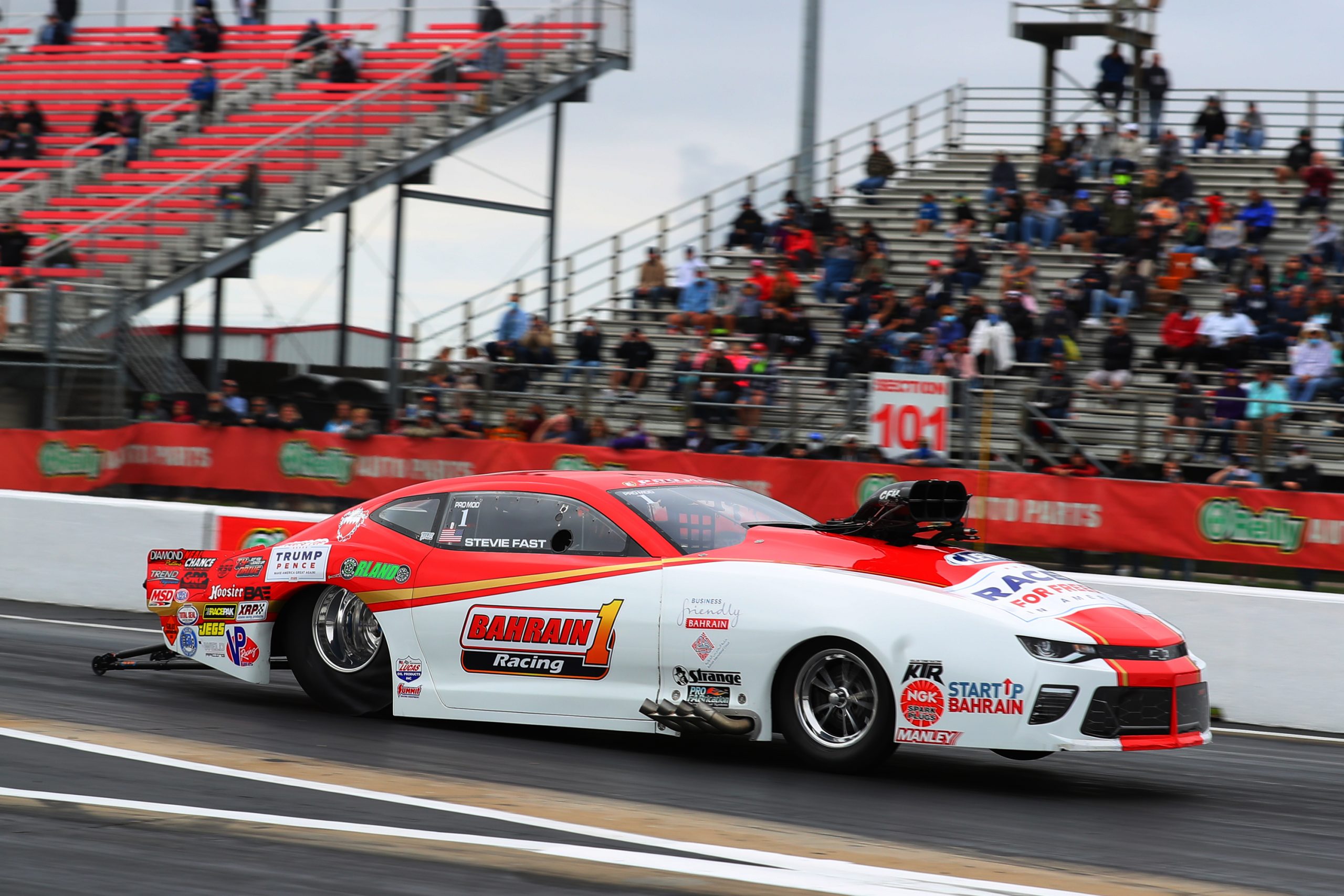 Snider will be ready as well, with his Corvette running well at a critical point in the season. He qualified No. 1 in back-to-back races in Gainesville and Dallas, and was second in Houston. Snider also beat Jackson on a holeshot in a thrilling final round in Dallas to pick up his first career victory in the class. It has him in uncharted waters at a key time, but Snider plans to stick to a routine that’s paid off this year.

“We’ve got the car working pretty well, and we knew a win was coming,” Snider said. “We felt like it was just a matter of time. For a few races now, we’ve had a car that was running well and going rounds, and it couldn’t have worked out any better. Everything has to line up and you just have to try to do your job. In the past, I’ve tried to pus the car and push myself, and then you wind up making mistakes. I’ve tried to be calm and laid back and just let things play its course.”