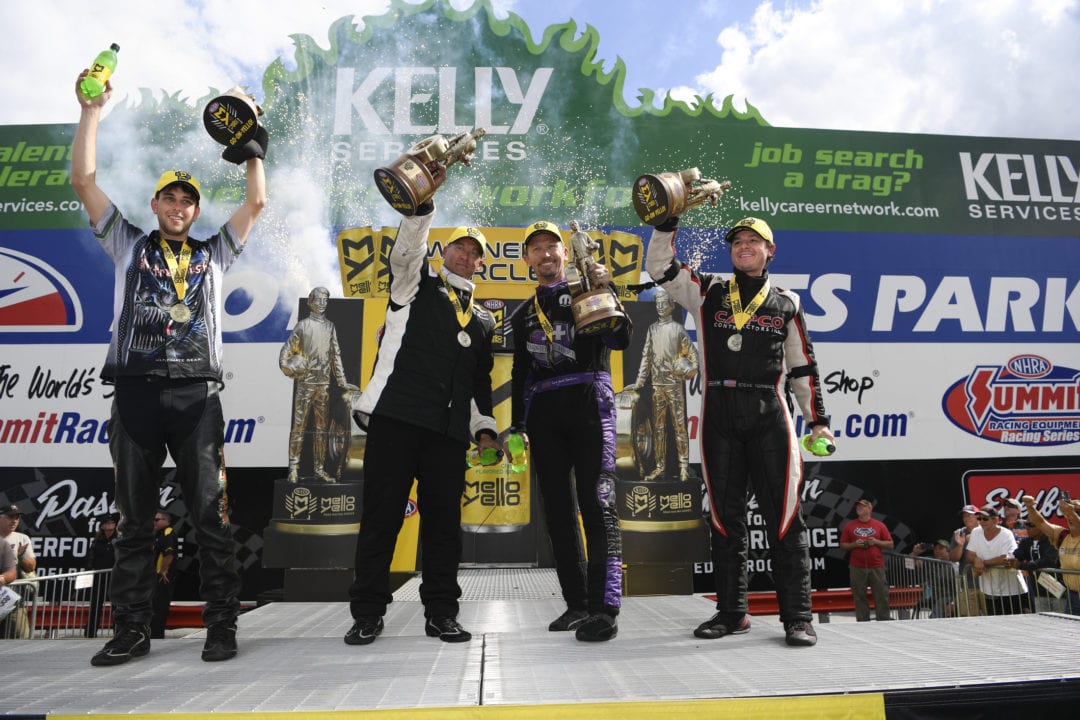 Torrence secured his career-best fourth victory of the season with a 3.743-second pass at 331.45 mph in his Capco Contractors dragster to defeat Doug Kalitta on a holeshot after he ran a 3.736 at 331.36 in his Mac Tools dragster. Torrence emerged victorious for the first time since Englishtown, and has now reached six final rounds on the season, with all six coming over the past eight events. 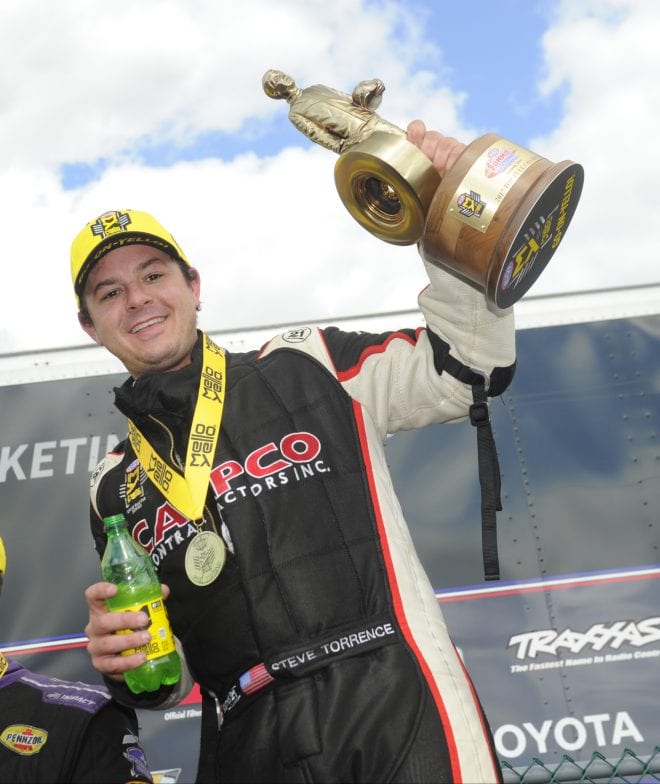 “I knew I left good on the tree but I could tell it would just be a coin toss who got it and fortunately I was able to come out ahead,” Torrence said. “It’s been a great season so far and we are hoping to keep this momentum going. We just need to keep our head down and work hard so that we can reach our goals as a team.”

Torrence qualified third and defeated Troy Coughlin Jr., Clay Millican and Brittany Force on the way to victory. Kalitta knocked off Troy Buff, Tony Schumacher and Leah Pritchett before reaching his second final round appearance of the season.

Torrence remained atop the points standings with the victory and Leah Pritchett is second in the standings after a semifinal appearance.

Beckman earned his 26th career victory and second of the season with a 4.073 pass at 311.85 in his Infinite Hero Foundation Dodge Charger R/T during the final round to defeat Robert Hight who ran a 6.673 at 98.53 in his Auto Club of Southern California Chevrolet Camaro SS. This was Beckman’s first win since Englishtown, and his third consecutive final round appearance this season. 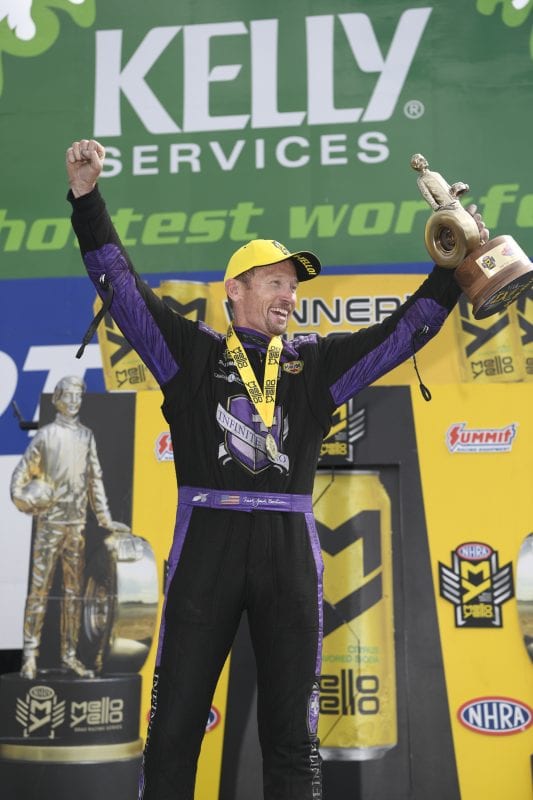 Beckman said. “Now that we are getting down the track consistently, it keeps our opponents honest and that is definitely a formula we will continue to use for the rest of the season.”

Beckman remains in third place in the points standings behind teammatesRon Capps and Matt Hagan, who both fell in the quarterfinals.

Points leader Butner secured the victory in Pro Stock after driving to a 6.601 at 210.50 in his Jim Butner’s Auto Chevy Camaro to knock off Greg Anderson on a holeshot after running a 6.581 at 210.87 in his Summit Racing Equipment Chevrolet Camaro. Butner now has three victories on the year as he notched his first win since Atlanta.

“Today was a great day, we made four pretty consistent runs and my car was good when it needed to be,” Butner said. “It’s one thing to have a good car, but we also had a lot of things go our way to get those win lights today.”

Butner had the second-best qualifying time and defeated Val Smeland, Vincent Nobile and John Gaydosh en route to his fifth final round of 2017. Anderson earned his sixth final round appearance of the season by defeating Mark Hogan, Allen Johnson and Jason Line.

Butner added to his lead in the points standings, becoming the first three race winner in the Pro Stock category this season. Anderson remains in second place with his fourth runner-up appearance of the year.

In Pro Stock Motorcycle, Tonglet emerged victorious with a 6.824 at 195.76 in his Nitro Fish Racing Suzuki to defeat Matt Smith’s pass of 6.882 at 195.31 in his Victory Polaris Magnum. Tonglet notched his 13th career victory and third of the season.

“I didn’t see any win lights throughout qualifying, but seeing them on Sunday is what matters and we are happy with the results,” Tonglet said. “This is huge for us and our position in the points standings, so getting as many wins as possible is definitely our goal.”

Tonglet has now reached three final rounds in five events this season, winning all three of those appearances. He defeated Melissa Surber, Steve Johnson and Hector Arana Jr. before the final round. Smith took on Joe DeSantis, Mike Berry and Scott Pollacheck before reaching his first final round of the season.

Tonglet jumped to first in the Pro Stock Motorcycle points standings and Eddie Krawiec fell to second after falling in the first round.