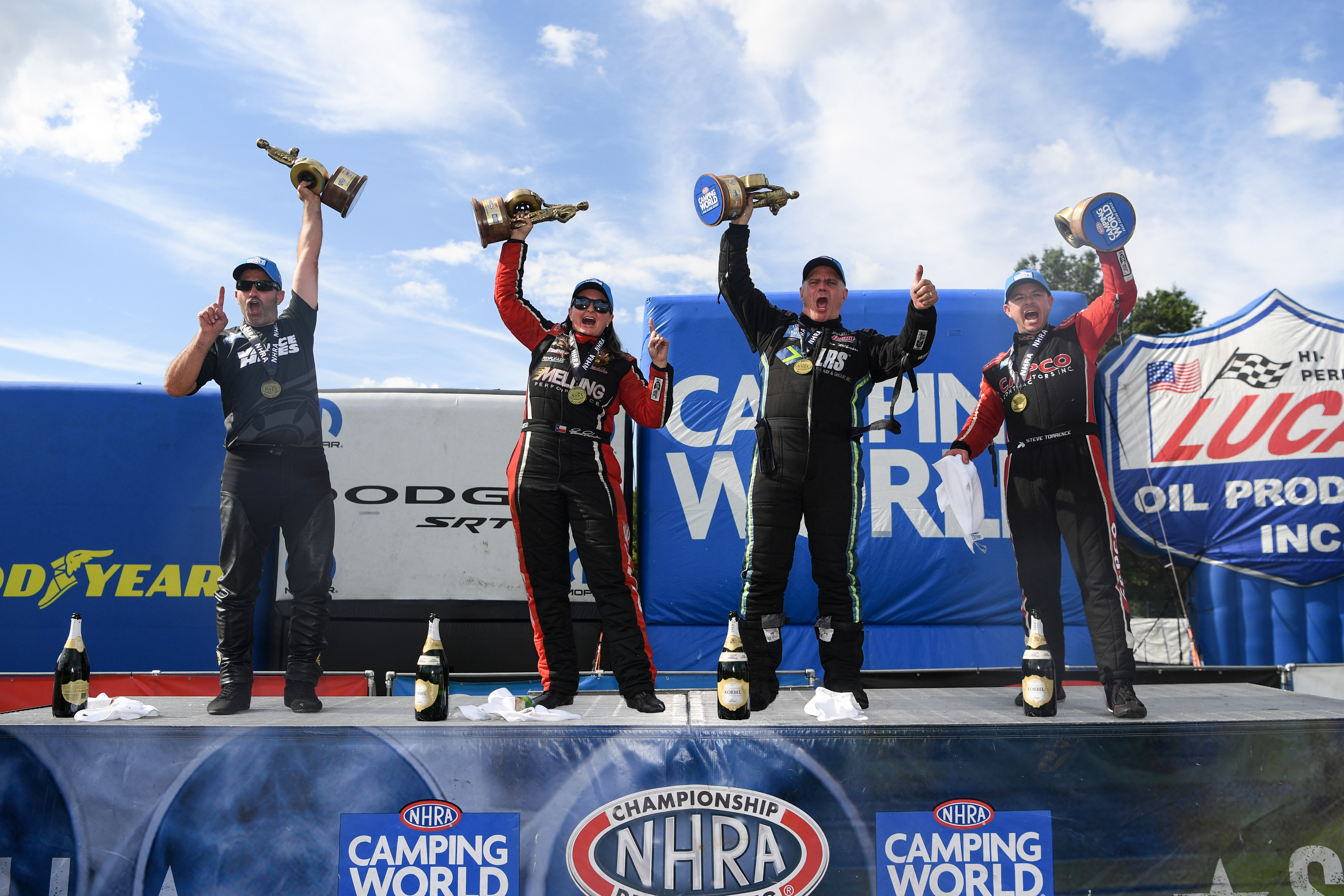 Tim Wilkerson won for the first time in more than five years and came through at the biggest event of the season, racing to the Funny Car victory on Sunday at the prestigious 67th annual Dodge//SRT NHRA U.S. Nationals at Lucas Oil Raceway at Indianapolis.

Steve Torrence (Top Fuel), Erica Enders (Pro Stock) and Eddie Krawiec (Pro Stock Motorcycle) also won in their respective categories at the 13th event of the 2021 NHRA season. It is also the final race of the regular season before the Countdown to the Championship playoffs begins.

Wilkerson, who last won in 2016, powered his 11,000-horsepower Levi, Ray & Shoup Ford Shelby Mustang to a run of 3.912-seconds at 320.36 mph in the final round, denying Ron Capps his first U.S. Nationals victory. Wilkerson picked up his second win at Indy and 21st career victory as well, also earning a trip to the winner’s circle for the first time in 114 races. Wilkerson got past Bobby Bode, John Force and Cruz Pedregon en route to the final round, where he raced past Capps early in the run and picked up the long-awaited win. He’ll open the playoffs ninth in points and with plenty of momentum after his memorable weekend at the Big Go. 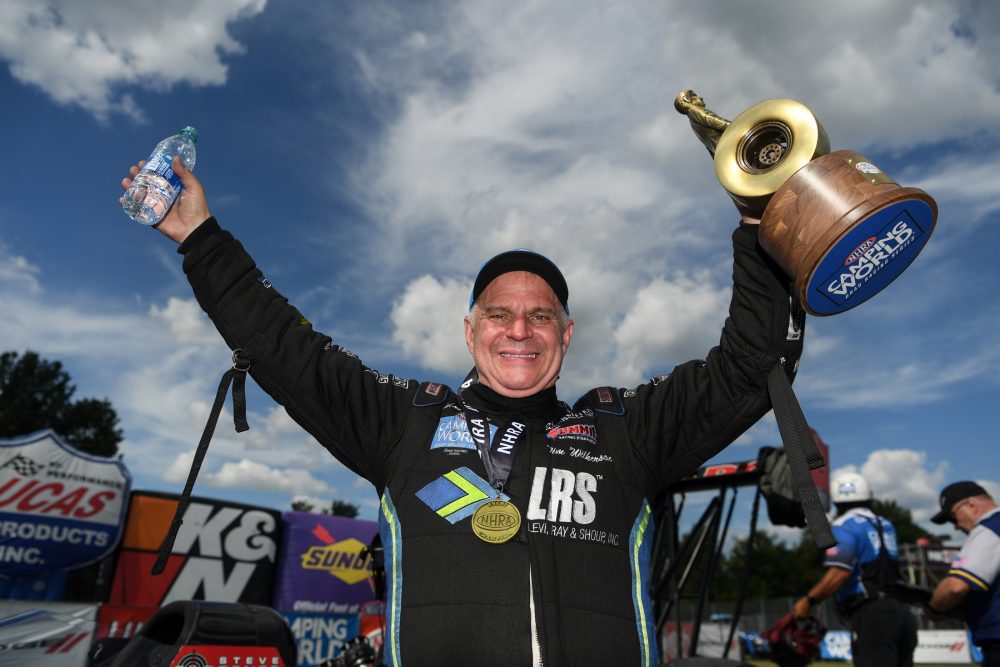 “We go out there and run the car and race the lane,” Wilkerson said. “Capps has used me up the last 2-3 years. He’s whooped me every time in the finals. We’ve got a good car, ran well in Brainerd and I was making sure I was going down the track today. In the finals, I ran it like it was a night run. My guys do such a terrific job and there’s a lot of emotion in this. I’m really proud of them. This place and me, we’ve got a good relationship and it always treats me well.”

Capps defeated Justin Schreiber, Robert Hight and Alexis DeJoria to reach the final round for the fourth time this season and 129th time overall. With his strong showing, he jumped into the points lead heading into the playoffs, with Force in second.

Torrence’s incredible 2021 campaign continued at Indy, as rocketed past Brittany Force in the final round with an impressive run of 3.749 at 324.44 in his 11,000-horsepower Capco Contractors dragster. That gives the points leader and three-time defending world champ his eighth victory in 13 races this season and 48th in his career, as well as his second U.S. Nationals win. Torrence reached the final round by taking out Antron Brown, Greg Carrillo and his father, Billy, before easily dispatching No. 1 qualifier Force when she went up in smoke early in the run. It’s another impressive moment for Torrence, who has his sights on trying to win a fourth consecutive world title.

“It was just a great raceday and it’s unbelievable to be able to say you’ve won Indy and do it twice in Top Fuel, it’s the pinnacle race of our sport,” Torrence said. “This was a great weekend and there was some really good racing today. We’ve been so blessed to win eight races this season. We’re going to approach (the Countdown) one round at a time and one race at a time, and I’m going to lean on my guys and they’re going to lean on me and we’ll see what we can do.”

Force, who will start the Countdown to the Championship as Torrence’s chief competition and second in points, defeated Shawn Langdon, Alex Laughlin and Josh Hart to reach the finals for the fourth time this season and 27th time in her career.

Enders’ Indy dominance continued in impressive fashion on Sunday, as she won at the Big Go for the second straight year by slipping past Kyle Koretsky on a holeshot in the final round in her Melling Performance/Elite Motorsports Chevrolet Camaro. Enders went 6.626 at 206.01 in the final round, with her .024 reaction time making the difference to beat Koretsky’s 6.613 at 206.35. It gives Enders her third win this season, third at Indy at 32nd in her career. The defending and back-to-back world champ beat Bruno Massel, Matt Hartford and points leader Greg Anderson to reach the final round at the U.S. Nationals for the third straight year. Now, she’ll aim to pick up her third straight world title and Enders will start the playoffs from second place. 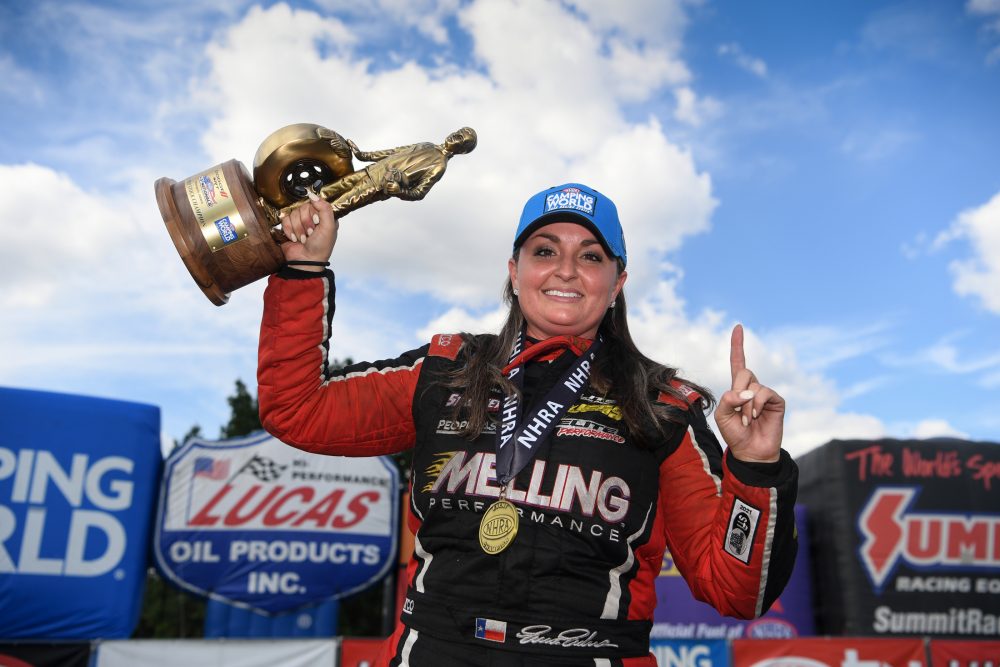 “I had a really great car all day,” Enders said. “To win this in back-to-back years, it’s a great way to head into the Countdown. We’ve just got to keep it rolling, but it’s really humbling when you take a step back and realize what we’ve accomplished in a short time. Getting the win in 2020 and sticking it in the winner’s circle today, I had a good feeling this morning. To be victorious at the end of the day makes everything else go away. This one means a lot and it’s our Super Bowl.”

Koretsky’s impressive late-season surge continued as he advanced to his second straight final round with wins against Larry Morgan, Chris McGaha and rookie Dallas Glenn. Koretsky will open the playoffs in fourth, while Anderson maintains the points lead heading into the Countdown to the Championship.

Krawiec had an impressive weekend at the ideal time, picking up his first victory of the season by taking out Vance & Hines teammate Angelle Sampey in the final round with a run of 6.844 at 198.58 on his Buell. Krawiec qualified No. 1 for the first time this season and then rode that momentum to the winner’s circle for the 49th time in his standout career. He also won for the third time at the Big Go, taking out teammate Andrew Hines, Michael Phillips and Joey Gladstone to reach the final round. He raced past Sampey and appears to be rolling at the perfect time, heading into the playoffs fourth in points thanks to his tremendous Indy showing. 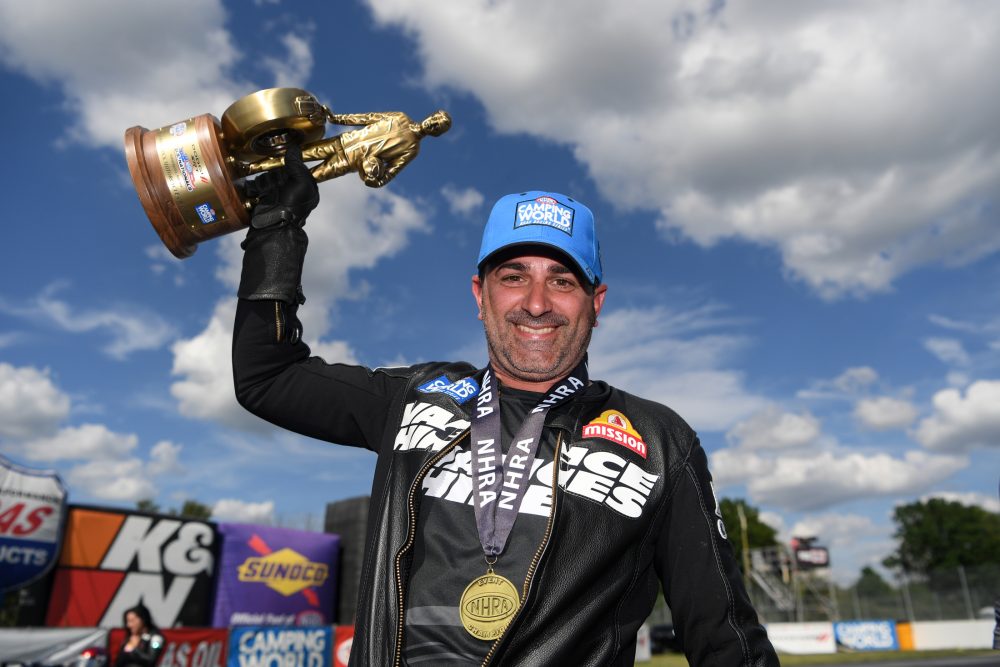 “It was a little bit of luck, a little bit of good and hopefully things just fall your way,” Krawiec said. “We came out with the No. 1 motorcycle right off the trailer and second round was my lucky round. In the final round, I knew we had to be good and I was just excited. We’re back in (the class) and that feels good. To get two team bikes in the final round, that was something special. This is a true Vance & Hines win and it’s really cool to do that for everybody. It’s just really great to get this.”

Sampey reached the final round for the second straight race and 76th time in her career, knocking off Cory Reed, Steve Johnson and defending event winner Scotty Pollacheck. Defending world champ Matt Smith will enter the playoffs with the points lead and Johnson is second.

The NHRA Camping World Drag Racing Series returns Sept. 9-12 with the Mopar Express Lane NHRA Nationals presented by Pennzoil at Maple Grove Raceway. It is the first race of the Countdown to the Championship playoffs.