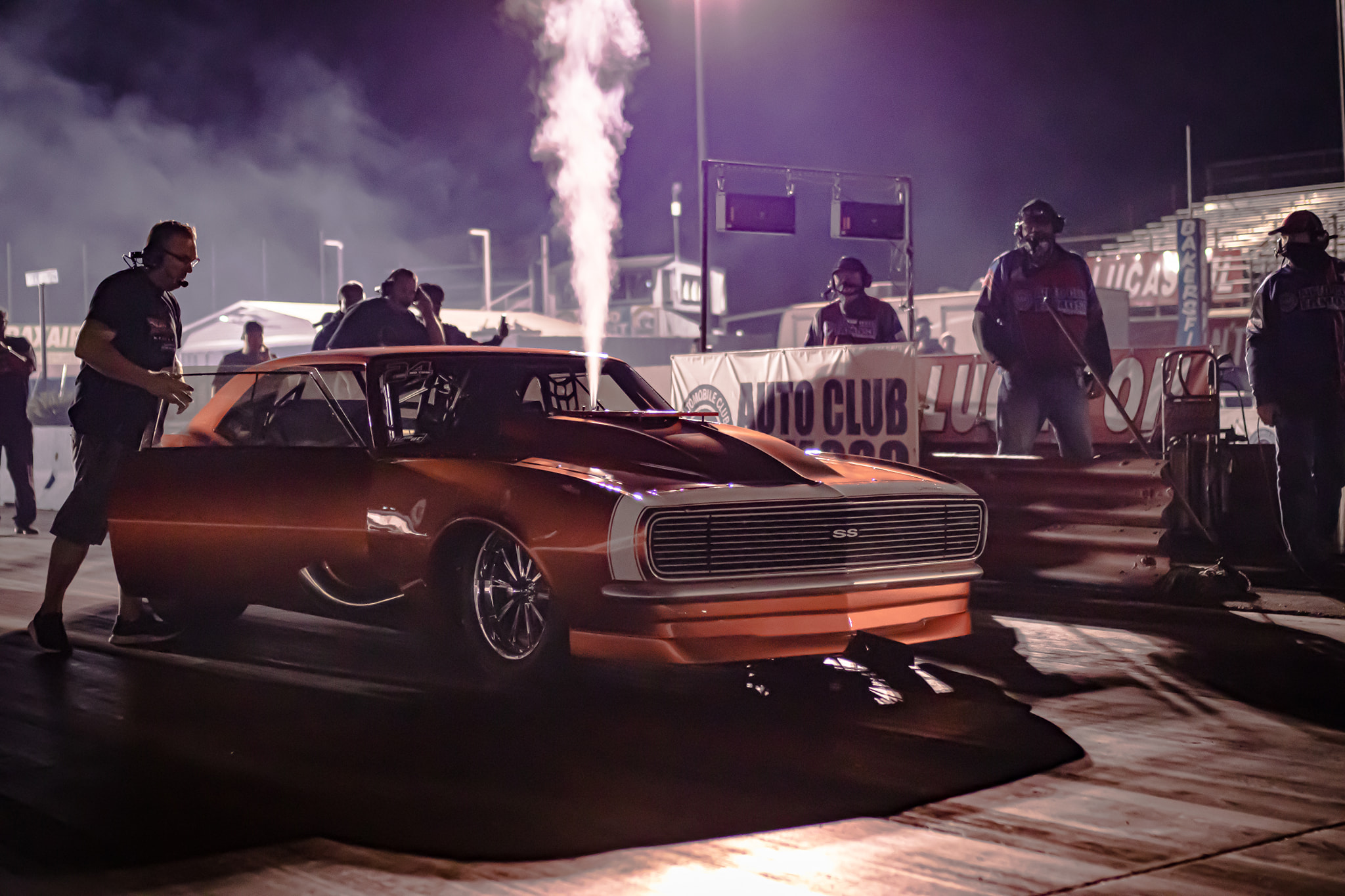 With the temperatures in the high 90s during the afternoon, it was awesome racing into the wee hours of the morning. West Coast Hot Rod Association brought in Jimmy Bradshaw again from Sticky Mafia Track Services, which worked with the Famoso Raceway crew and they prepped the track to be on kill. We had multiple racers and crew members say how much they loved night racing and how great the track was! With over 280 cars, it turned out to be an awesome race!

We had the famous Al Tucci announcing and entertaining on the mic again as the official WCHRA announcer! We were so excited to have him out in Bakersfield with us again. He will be with us all through the 2020 race season so make sure you come on out and say hello!

Friday was a WCHRA Test N Tune, which went off with a hitch like it always does and was capped off with the first Bracket Race of the event for Super Pro and Pro. Larry Warne out of Tehachapi, CA took the win in Pro.

Saturday was intense with racers traveling over 1000+ miles from Colorado, Idaho and Washington. Everyone wanted a chance to prove their worth and collect the big purses!

Big Tire presented by MagnaFuel Products Inc and Hughes Performance had Giuseppe Gentile in his Ford Mustang from Sun Valley, CA take the win over California native Jermaine Boddie who couldn’t make the call in his ProCharger-boosted Camaro.

Small Tire presented by Menscer Motorsports and RC Components had Roger Holder from Bakersfield, CA in his beautiful nitrous-assisted Camaro take out in the final Mike Orban from Grass Valley, CA in his ProCharged Camaro.

Nitrous Only presented by Induction Solutions and Mike’s Transmissions had some fierce competitors with Palmdale, CA native Rich Hoyle in his Chevy Nova called “The Greyhound” taking home his second win of the 2020 season over Jason Smith out of Litchfield Pk, AZ.

Outlaw 8.5 vs Limited 275 presented by Vortech Supercharges and Bag of Donuts Racing had a great final round when Tess Wood in her Maverick based out of Palmdale, CA took out Eric Outland in his Chevrolet Camaro.

Ultra Street presented by ProCharger and Area 51 Fireworks was still on fire! Luke Harper all the way from Littleton, CO drove over 1,100 miles to take the win in his nitrous Mustang over Mike Silva out of Madera, CA with his nitrous Nova.

Top Comp class presented by Speedwire Systems and SI Valves had Brian Weber as the last man standing in the wee hours of the morning against Ricky Dueschle out of Palmdale, CA.

After splitting up our Index classes this year, in A/Gas presented by Area 51 Fireworks had Jim Teague from Sanger, CA take out Joey Trotsky based out of Venture, CA. In B/Gas presented by RES – Race Engine Systems had 2019 WCHRA King of the Hill Index Champion Brent Handley out of Visalia, CA take the win over J. Todd Fernandes based out of Tulare, CA. Alta Loma, CA based Kevin Stokesberry did it again this year and became the C/Gas winner presented by JE Pistons in his beautiful ‘71 Chevelle over friend Monte Lafrenz from Hesperia, CA. In D/Gas presented by Hughes Performance, Mike Williams from Bakersfield, CA took home the “W” over James Burt out of Kingsburg, CA. Last but not least in our newly brought back class of E/Gas presented by Dustin Lee Racing Engines, sponsor Dustin Lee did what he does best and took that win home again this season to Antelope Acres, CA over Butch Headrick from Arroyo Grande, CA.

Super Pro presented by VP Racing Fuels and Mickey Thompson Tire was dominated by the California native Emma Deuschle in her Chevrolet Corvette over Brian Weber, who almost had his second win of the night or should I say morning, haha!

Pro presented by PMR Racecars and VP Racing Lubricants was taken over again on Saturday by Larry Warne for his second win of the weekend over badass bracket racer Kyle Rizzoli out of San Luis Obispo, CA.

All of us at WCHRA would like to say, THANK YOU to all of our great racers, marketing partners, fans, Al Tucci, Jimmy Bradshaw and certainly the Tucson Dragway staff! We couldn’t do it without each and every one of you! Watch our Facebook, Instagram and website for upcoming race information! “For racers, by racers.”