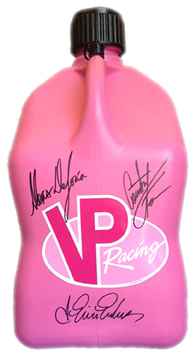 In a show of support for Breast Cancer Awareness, VP Racing Fuels is auctioning off a “Special Edition” Pink Motorsports ContainerTM autographed by NHRA drivers Courtney Force, Erica Enders and Alexis DeJoria. In addition to the autographed container, the winning bidder will receive two tickets to an NHRA National event and an opportunity to meet and be photographed with the three drivers.

The pink containers were recently introduced by VP in recognition of Breast Cancer Awareness Month, with a portion of the sale proceeds for each container to be donated to the Prevent Cancer Foundation. “I think it’s awesome that VP decided to make pink fuel jugs this year,” said DeJoria. “It’s wonderful to see great companies like VP support such an important cause and I was so happy to be included in this fundraising effort.”

“We’ve been overwhelmed by the demand for these pink containers which have struck a chord with race fans all over the country,” said Alan Cerwick, President of VP Racing Fuels. “With Courtney, Erica and Alexis lending their time and support, this auction will allow us to raise even more funds for the Prevent Cancer Foundation.” 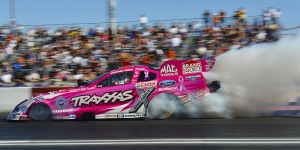 “I’m really excited VP Fuels is putting this auction together,” said Force. “I ran my pink Traxxas Ford Mustang Funny Car twice in October and to see even more exposure and money going to help prevent breast cancer is awesome.”

” We’ve already received a generous opening bid of $2,000 from Ray Ables, President of Pace Oilfield Services, Inc. and an avid NHRA fan interested in supporting the cause,” Cerwick added. ” We appreciate Ray’s generosity to get the auction started and encourage others to follow suit.”

Bids can be submitted by visiting VP’s website at vpracingfuels.com/auction, where they’ll also find the status of the latest bid. Bids must be received by November 7 at midnight and bidders must be 18 years of age or older to be eligible. 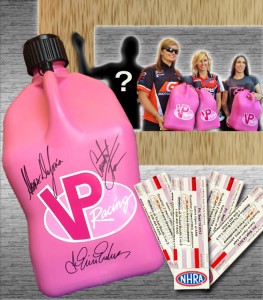 The winning bidder will receive: