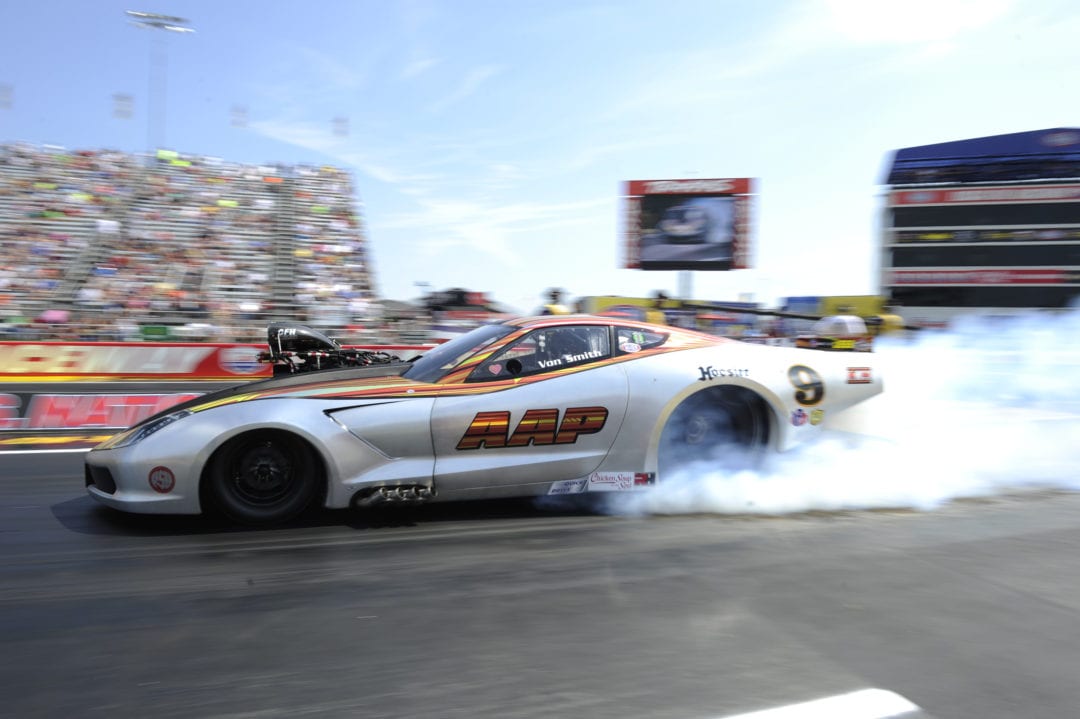 Von Smith raced to victory Monday in the NHRA J&A Service Pro Mod Drag Racing Series portion of the Chevrolet Performance U.S. Nationals. This weekend’s Pro Mod racing at Lucas Oil Raceway at Indianapolis is presented by JEGS. This is the seventh of 10 Pro Mod events on the 2016 season.

Smith raced his late model Al-Anabi Racing Chevy Corvette to an 11.726-second pass at 73.67 mph to defeat Troy Coughlin, who redlighted in his late model JEGS.com Chevy Corvette. Smith tallied his first victory of 2016 and seventh of his career. He outlasted Danny Rowe, 2011 champ Khalid alBalooshi and Doug Winters in the earlier rounds.

“My hat’s off to the whole crew because this car has been up and down for us all season,” said Smith, won the Pro Mod championship in 2010. “The best thing about everything is I didn’t know that I had won. I’m coasting down through there and not liking it, going ‘We almost did it, we’ll get another shot in a couple weeks.’ I come around the corner and the guy’s pointing me to the left and I’m like ‘What? Are you kidding me?’ I threw my hands up like ‘Did I win?’ He threw up the number one and I was like, ‘How about that. Praise the Lord.’”

Coughlin beat Steven Whiteley, Bob Rahaim and Billy Glidden in the earlier rounds before leaving the starting line early in the final. Coughlin, the reigning and two-time world champion, won earlier this year in Englishtown, N.J.