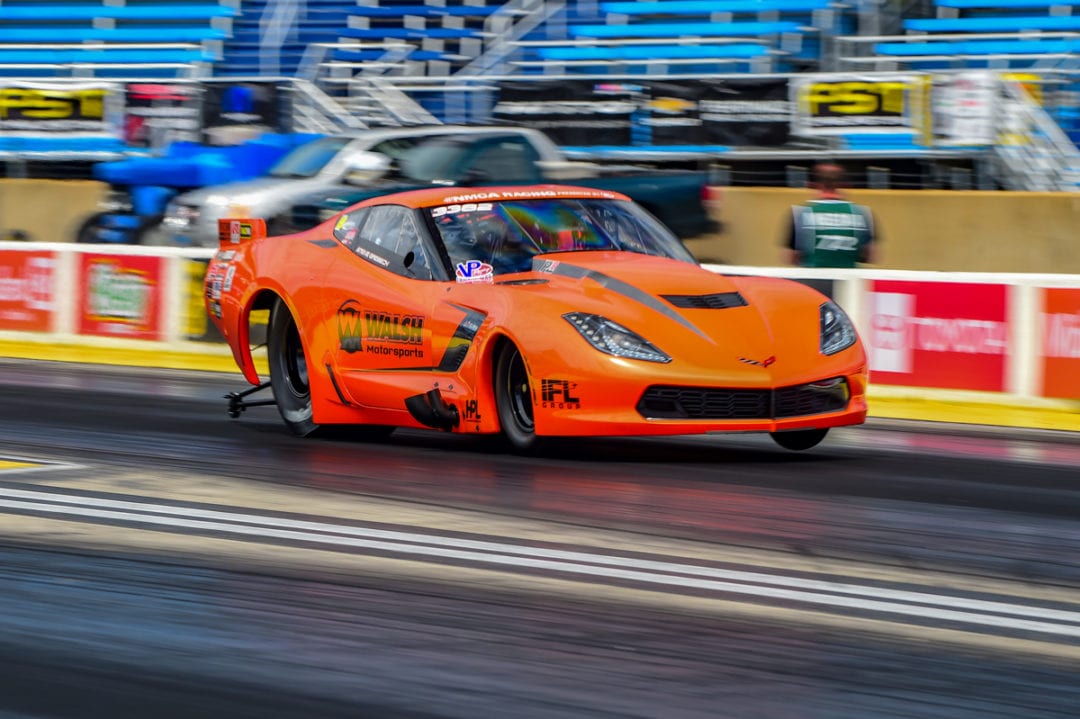 NMCA and NMRA drivers teamed up to put down twice as much power in the Prairie State for the 14th Annual Nitto NMRA/NMCA Super Bowl of Street Legal Drag Racing presented by FST Carburetors, July 25-28 at Route 66 Raceway in Joliet, Illinois.

With their sights set on the Aerospace Components Winner’s Circle and season championship points at this fourth of six events on this year’s tour, drivers in the potent VP Racing Fuels Xtreme Pro Mod category pulled to the lanes. In qualifying, they were led by Don Walsh Jr., who wheeled to a 3.74 in his Corvette, and several rounds later, Walsh Jr. pulled off another win with a 3.72 over Randy Adler, who was not far behind with a 3.77 in his Bel Air.

NMCA Mickey Thompson Street Outlaw and NMRA VP Racing Fuels Street Outlaw merged to make even more muscle at this event, and Dom DiDonato drove to a 4.46 to lead qualifying in his Mustang. The final round, however, belonged to Shane Fisher and Shawn Pevlor and their Mustangs. When the tree came down, both drivers recorded comparable reaction times, and Fisher flew to the win with a 4.45 over Pevlor’s 7.91.

Holley EFI Factory Super Cars saw Bill Skillman secure a 7.90 in his Mustang Cobra Jet to lead qualifying, and later, he sailed to a 7.98 to win over Terry Munroe, who turned in an 8.06 in his COPO Camaro.

There was a full supply of nitrous purges in ARP Nitrous Pro Street, except from Tony Gillig, who runs a naturally aspirated combination, and he still grabbed a 4.37 in his Cutlass to lead qualifying. Several rounds later, he faced reigning category champion Jordan Ensslin and his Trans Am, and Gillig, who had a slightly better reaction time, took the win on a holeshot after both drivers put identical 4.41 runs on the board.

NMCA Edelbrock Xtreme Street and NMRA Edelbrock Renegade drivers dueled each other at this event, and Joel Greathouse drove to a 4.70 in his Mustang to set the pace in qualifying. But making it to the final were NMCA newcomer Mike Thompson and Paul Smith and their Camaros. Thompson took it all the way to the Aerospace Components Winner’s Circle with a 4.72 to Smith’s 4.83. 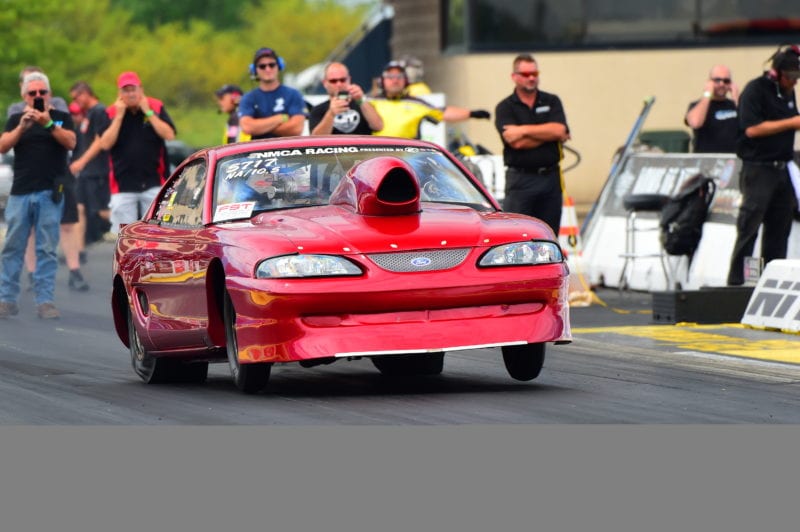 In the high-winding world of FST Carburetors NA 10.5, Leonard Long shifted his way to a 7.85 to lead qualifying in his Mustang. He made it all the way to the final round of eliminations where, in the heat of the day, he recorded a 7.95 to win over Dwight Ausmus, who wheeled his wheel-standing Firebird to an 8.10.

In Chevrolet Performance Stock presented by Scoggin-Dickey Parts Center, Jesse Wilson wrapped up a 10.191 to lead qualifying in his Camaro, but Haley Burkhammer was right there with a 10.197 in her Camaro to qualify in the second spot. She remained right there through the final round, where she won with a 10.23 to Wilson’s 10.32. Burkhammer’s victory snapped a season and a half-long winning streak by Wilson, resulting in an even bigger celebration in the Aerospace Components Winner’s Circle.

Wayne Larsen ran to an 13.42 on a 14.95 index in his Comet to lead qualifying in Coan Engineering Stock/Super Stock Combo, but the final round featured Jeffrey Frees and his Drag Pak Challenger and Terry Knott and a Dart. In the double break out race, Frees picked up the win with a 9.84 on a 9.86 dial, while Knott was 11.17 on an 11.20 dial. 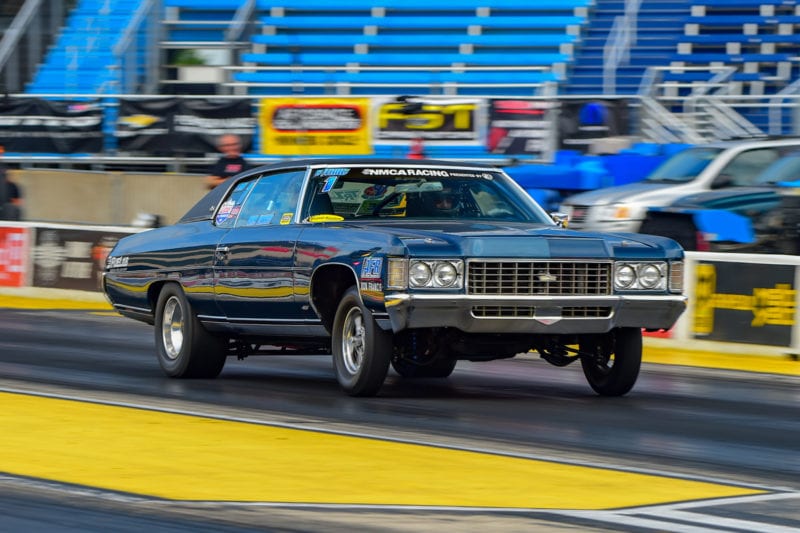 Multi-time Detroit Truetrac Nostalgia Muscle Car champion Andy Warren wheeled to a 10.25 on a 10.25 index in his Caprice to lead qualifying, and as the NMCA’s winningest driver, he made it to another final round. There, he broke out with a 10.23 on a 10.25 index, but still earned the win as Audrey Baize also broke out with an 11.72 on an 11.75 index.

Nicholas Massengale recorded a .002 to lead qualifying in MagnaFuel Open Comp, but in the sixth and final round, Kurt Anderson, who spends just as much time going skyward as he does going forward in his Camaro, won with a 9.98 on a 10.01 dial over Scott Williams, who was 8.48 on an 8.53 in his Chevelle in the double-breakout bout. 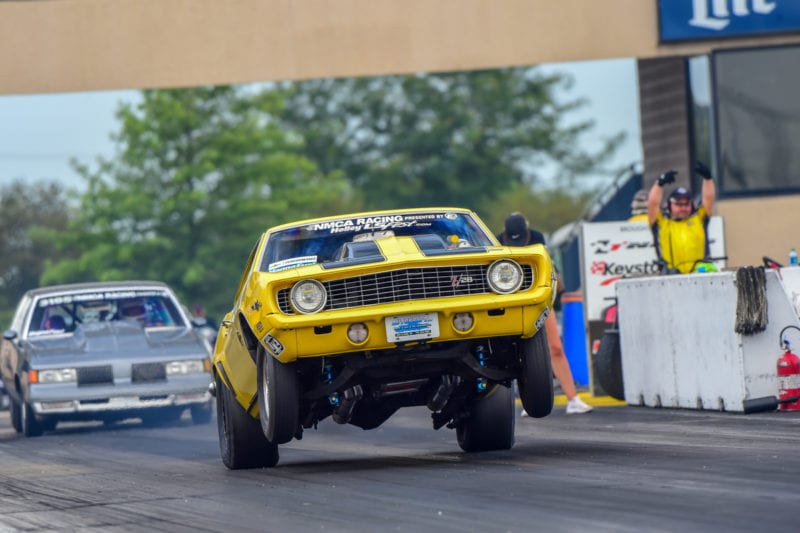 Drivers with 2005 and newer Gen III-powered Challengers, Demons, Hellcats, Chargers, 300s and Jeeps have been duking it out in the Dodge // Mopar HEMI Shootout at NMCA events this year, with Dodge // Mopar covering the cost of the entry for the first 75 drivers registering who take part. At this event, Victor Cervantes was the overall winner with a 10.11 average, while Derrick Roderweiss was the runner-up with an 10.16 average. John Ridings was the 11-second winner, Pat Baldezier was the 12-second winner, Ken Mason was the 13-second winner and Dana Baker was the 14-second winner. Brandon Alley wrapped things up as the 15-second winner. Then, after the eight quickest drivers in the category came together for the Arrington Performance HEMI Quick 8 presented by Red Line Oil, Wade Atchison arrived at the win with a holeshot and a 10.41 in his Demon over Derrick Roderweiss, who was 10.22 in his Demon.

NMCA Gear Vendors True Street, NMRA QA1 True Street, Chevrolet Performance Street Car Challenge and Dodge // Mopar HEMI Shootout drivers who wanted even more track-time were able to take part in the True Street Bracket. Six rounds later, Rodney Ward wrapped up the win with a 15.12 on a 15.10 dial, while Keith Saymore was the runner-up with a break out time of 10.65 on a 10.69.

To begin the newly named Bob Curran Memorial Super Bowl Shootouts featuring NMCA and NMRA drivers who won in their categories, Bob Curran’s son, Jeremy Curran, slowly drove his late father’s Xtreme Street Corvette down track, as his mother, Sue Curran, and fellow racers watched. Then, drivers faced off as flocks of fans rooted for their favorite series. After the last pair of cars had trampled the track, Team NMRA earned the title for the tenth time. As a righteous reward, each NMRA team member will be given a Nitto Diamond Tree ring, and Bob Curran’s family will generously give $500 to each round winner.

Next up on this year’s NMCA tour is the highly anticipated 18th Annual NMCA All-American Nationals, Aug. 22-25 at Summit Motorsports Park in Norwalk, Ohio. For more information and advance tickets, visit www.NMCAdigital.com/OH