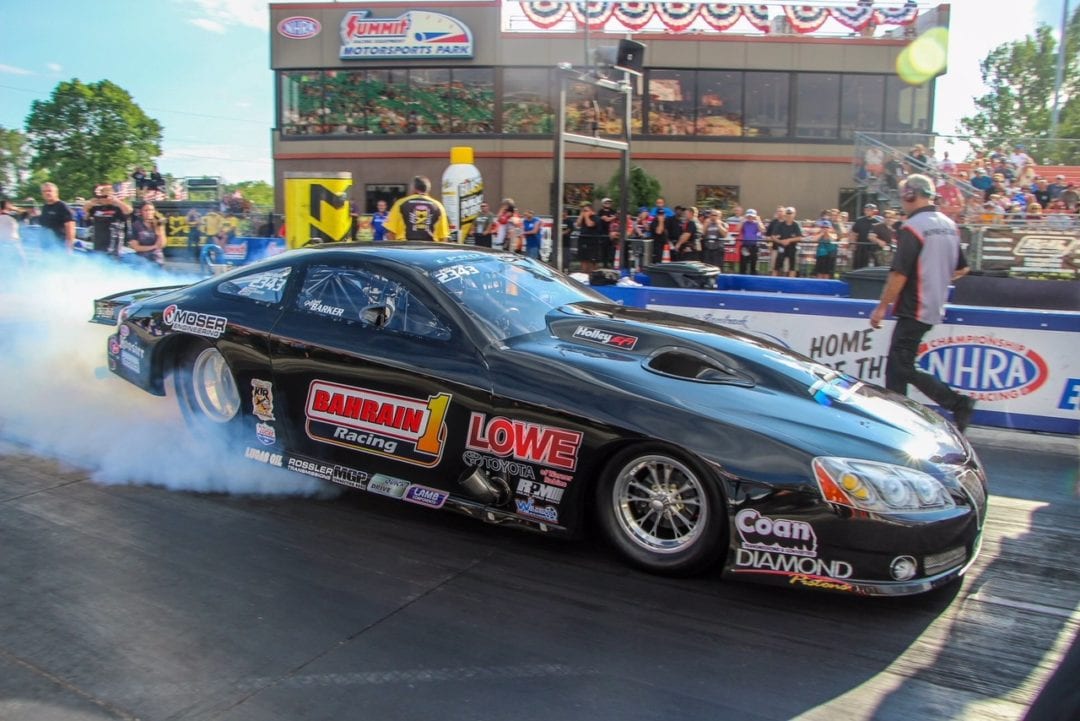 In less than a year, Jeffrey Barker has gone from never even staging or turning on a turbo car to now racing with Stevie “Fast” Jackson at the DRAG ILLUSTRATED World Series of Pro Mod.

It’s been a rapid turn of events for the two-time Top Sportsman world champion, but Barker has enjoyed every part of it.

Making his first visit to Bandimere Speedway, the site of this weekend’s $100,000-to-win WSOPM, this is the latest major adjustment for Barker, who had hopes of one day racing in Pro Mod. The process has come together quicker than Barker could have ever imagined, but now that he’s in the thick of it in the Bahrain 1 Racing turbo GXP, Barker has high hopes for the weekend on Thunder Mountain.

“I’m excited about it. It’s the biggest Pro Mod race there is, so how can you not be excited,” Barker said. “I’ve never been here, but the facility is great and the track is just killer. Everything is a little different, but we’re getting there. I think we’re going to be very competitive. Based on what we’ve done and the results we’ve seen with the early numbers, we’re confident with what we can run.”

Barker looked progressively better with each run during Wednesday’s test session, which was all part of the plan for his first race in Denver.

The team made big adjustments heading to the altitude at Bandimere and the plan is to continue to pick away at things on Thursday.

But Barker has proven to be up to the task, showing impressive skills through four NHRA Pro Mod races. He qualified for the first time at Bristol this year and has made considerable strides since debuting with Jackson last year in St. Louis.

In turn, Jackson has also praised Barker’s talents, calling him “as good a driver as I’ve seen,” during Wes Buck’s Facebook Live show earlier this summer.

Barker’s driving skills speak for themselves after earning his second Top Sportsman world championship in 2017, while Barker said teaming up with Jackson has been hugely beneficial to both parties.

“I’ve learned a ton from him just with the car overall,” Barker said. “I’ve probably helped him with maybe being a little more consistent on the tree, but he’s really helped me understand certain aspects of the car better. Not that I was wrong, just more in the fine details of things.”

Barker has helped Jackson’s consistency in his driving and that’s going to be imperative for either one to have success against the star-studded Pro Mod lineup competing this weekend.

Barker still needs to see more improvement on the final day of testing, but he remains optimistic about the car he will have when it counts.

“I think you just need to make good, consistent passes,” Barker said. “Of course you have to be fast, but you have to go A to B. We’re going to pick at it (Wednesday) and if we don’t get the results today, we’ll make a big change tomorrow. But I think we’ll be good. We made a big change on it before we came here knowing it’s so much different, but I think we’ll get there.”

As for Friday’s highly anticipated $5,000-to-win burnout contest that Jackson has his sights set on, Barker may not compete simply due to a lack of parts for both drivers.

But he also joked that there may be another reason.

“The biggest reason is because he knows I’ll beat him,” Barker said, laughing.