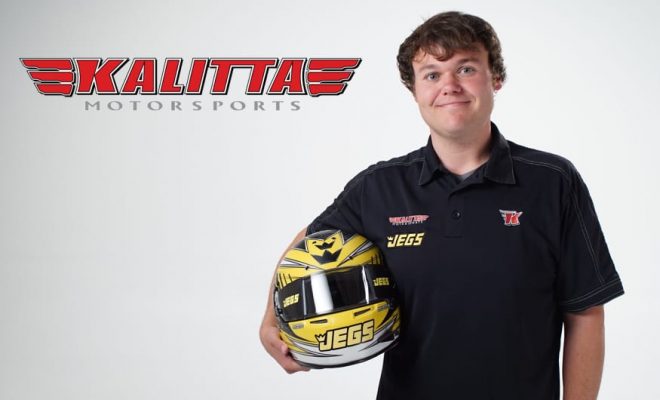 Kalitta Motorsports is pleased to announce the expansion to a third Top Fuel dragster team driven by Troy Coughlin, Jr. beginning in the 2017 season. This announcement aligns two of the legendary names in the sport, Kalitta and Coughlin, for the first time.

“I am very excited to be competing in the Top Fuel class with Kalitta Motorsports,” said Coughlin, Jr. “Kalitta Motorsports has a lot of history and legacy in NHRA similar to my family. The first time I came to Team Kalitta I noticed the family-type atmosphere and the extreme desire to win and I knew this was the team I wanted to be involved with. I am studying hard and plan to hit the ground running and have a strong start to the 2017 NHRA Mello Yello Drag Racing season.”

Coughlin, Jr. is the current points leader in Division 3’s Super Comp division. He previously won the 2013 Super Gas title in Division 3 and is a two-time NHRA U.S. Nationals winner. Last season, he drove in the NHRA J&A Service Pro Mod series and was named Rookie of the Year. In his career, the 26-year-old driver has driven Junior Dragsters, Super Comp, Super Gas, Top Dragster and Pro Mod machines. Earlier this year, he earned his Top Fuel license.

Next season, Coughlin, Jr. is currently scheduled to compete in a limited schedule that may be expanded with additional funding.

Coughlin, Jr. comes from a family with a long line of NHRA success. He will be the first Coughlin to compete in the Top Fuel ranks since his grandfather, Jeg Coughlin, Sr., won races in the late ’70s and ’80s. His father, Troy Coughlin, Sr., is the reigning NHRA J&A Service Pro Mod Champion, while his uncles, John Coughlin, Mike Coughlin and Jeg Coughlin, Jr. are all multi-time champions. John and Mike earned multiple Division 3 titles, while Jeg Coughlin, Jr. is a five-time Pro Stock champion and current Countdown for the Championship qualifier. All totaled the Coughlin family owns 111 NHRA national event wins.

“Kalitta Motorsports is thrilled to have Troy, Jr. join our team,” said Jim Oberhofer, Vice President of Operations, Kalitta Motorsports. “He has a ton of talent and a passion for racing. The Coughlin and Kalitta names have a long track record of success in NHRA drag racing and we know Troy, Jr. is just going to help continue that tradition of success for both families for years to come.”

Founded in 1959, Kalitta Motorsports will expand to a sixth entry for the first time in its history. As the only multi-car nitro team to qualify every team in the Countdown for the Championship for the past three seasons, Team Kalitta has a long history of success. Coughlin, Jr. will have an incredible set of teammates to lean on as he goes through his rookie season. Current Team Kalitta drivers Kalitta, Todd, Worsham, Alexis DeJoria and Paul Lee have nearly 100 combined victories and over 1,000 round wins.

Coughlin, Jr.’s 2017 schedule, sponsorship and crew chief will be announced at a later date.