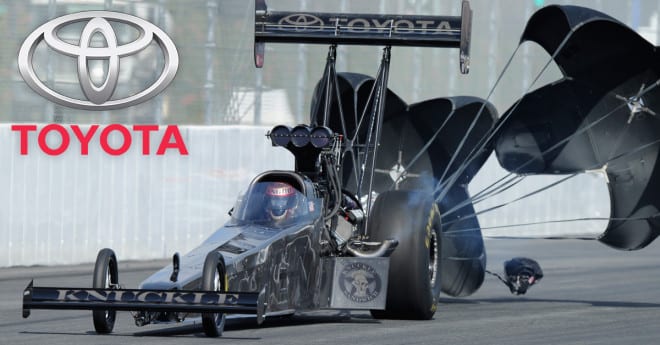 Toyota Motor Sales, U.S.A. has increased its backing of Alan Johnson Racing and driver Shawn Langdon in support of the team’s search for primary sponsorship, the team announced today. The team and driver Shawn Langdon are competing in this weekend’s fourth race of the NHRA Mello Yello Drag Racing Series season, the sixth annual NHRA 4-Wide Nationals at zMAX Dragway in Concord, N.C.

Toyota is Alan Johnson Racing’s longest-standing partner having first joined the team in 2001. Toyota’s increased support will give the team additional time to secure primary sponsorship. The team announced Jan. 5 that it unexpectedly lost its sponsorship approximately a month before the 2015 season began, made a pre-season commitment to race the season’s first two events and later added the third event in Gainesville, Fla., two weeks ago.

“With our expanded sponsorship of Shawn Langdon and Alan Johnson Racing, Toyota wants to show other potential sponsors that we are committed to the AJR program,” said Ed Laukes, Vice President marketing, performance and guest experience for Toyota Motor Sales (TMS), U.S.A. “They have proven to be one of the top teams in any form of motorsports and this sponsorship should assist them in securing a primary sponsor for the rest of the season.”

“Toyota has been a loyal Alan Johnson Racing partner for nearly 15 years, and we appreciate their increased support very much,” team owner Alan Johnson said. “In addition, we are very thankful for their loyalty and their confidence in our race team. We made the decision to compete in the early part of the season to show potential sponsors that we have a championship-caliber race team; Toyota’s gesture and their confidence in our program at AJR will be very helpful in that endeavor.”