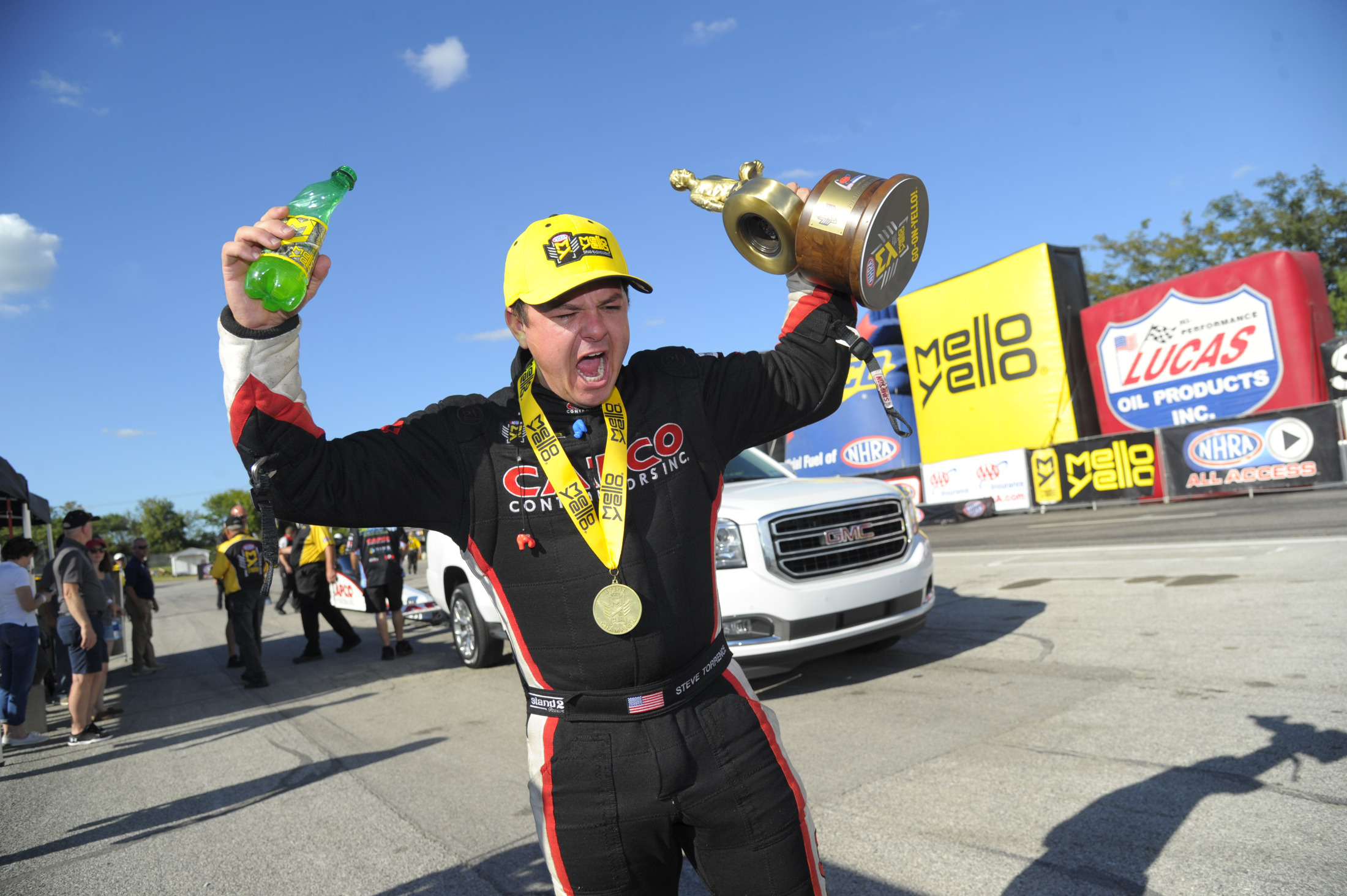 Coming off a week in which he drove a Don Garlits tribute car to victory on “Big Daddy’s” home track, took over the point lead for the first time this season, beat his dad in an all-Capco Contractors Top Fuel final and announced that he and wife Natalie are expecting their first child, some people might have expected Steve Torrence to lack incentive in the 23rd Mopar Express Lane Midwest Nationals beginning Saturday at World Wide Technology Raceway.

“When you grow up in a competitive environment, you’re always ready for the next challenge,” Torrence said. “We had a great week in Gainesville with ‘Big’ and it was an honor to be able to put ‘Swamp Rat 14’ in the winner’s circle, but we can’t afford to rest on our accomplishments. There’s still work to do.”

Number one on the Torrence “hit list” is maintaining the point lead he worked so hard to secure in a season abbreviated by the COVID-19 pandemic. The 37-year-old Texan will start Saturday just 22 points ahead of veteran Doug Kalitta and 33 ahead of Leah Pruett in a three-driver duel that likely won’t be decided until the Dodge Finals at Las Vegas on Nov. 1.

For Torrence, the significance of winning a third straight championship is palpable. Only two Top Fuel drivers have strung together three consecutive titles. Even though he was voted the sport’s No. 1 racer during the NHRA’s first 50 years, Garlits never did it. Neither did Shirley Muldowney, nor Gary Scelzi, nor Kenny Bernstein, nor Larry Dixon.

Beyond that piece of individual history, Team Torrence is in a position to make even more if it can get one of its Capco-backed dragsters into the winners’ circle on Sunday. If so, it would be four straight wins at the Midwest Nationals, back-to-back successes for the younger Torrence in 2017 and 2018 and a win for his dad, Billy, in a little family feud action a year ago.

It would not be an understatement to say that last year’s race saved the championship for Torrence. Even though he was beaten in the final, the fact that he reached the money round helped offset a first round loss at Reading, Pa., in the Coutndown opener that had knocked him out of the lead for the first time in 15 races.

He regained the lead a race later when he won at Charlotte, N.C., and then held on by fingernails to win by a scant three points over Kalitta, a far cry from 2018 when he won his first title by sweeping the six races in the Countdown, something unlikely to be accomplished ever again.

Finally, with a victory this weekend or in one of the last three events, Torrence would become just the 23rd pro driver to reach the 40-win plateau, just the sixth to accomplish that feat in Top Fuel.

That he hadn’t won a pro race nine years ago when he formed his current team speaks volumes about his and his team’s dominance which is reflected most graphically by the fact that he and his dad have won half of the last 74 events contested in the NHRA series including this year’s season opener in which neither participated.

Qualifying runs at 1:30 and 5 p.m., Central time, on Saturday will set the lineups for Sunday eliminations beginning at 11 a.m., Central.