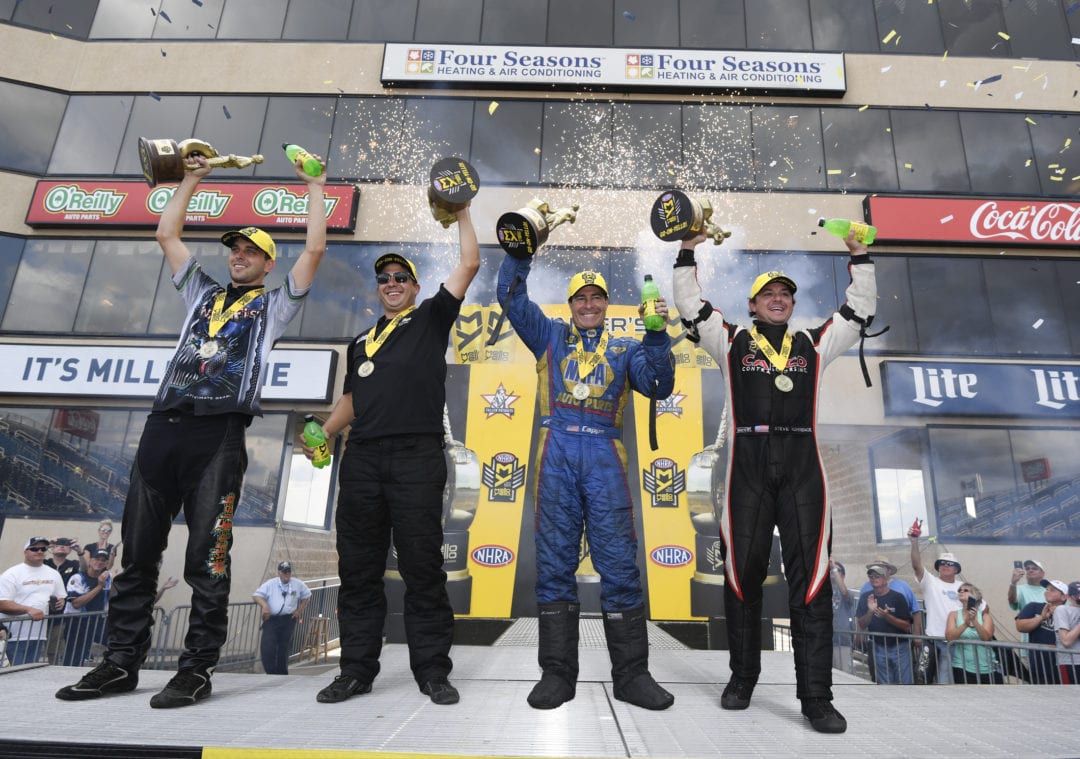 Top Fuel points leader Torrence secured the win with a run of 3.779-seconds at 326.08 mph in his Capco Contractors dragster to take down Antron Brown after he ran a 3.786 at 326.71 in his Matco Tools dragster in the final round. Torrence notched his 13th career victory and his third in the past four events. 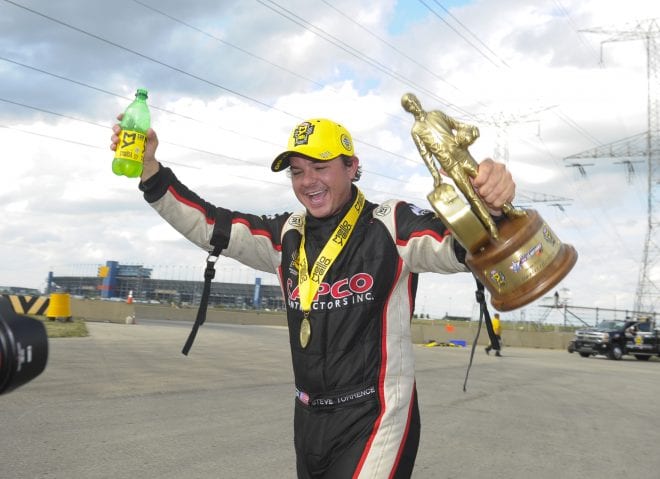 “I knew Antron [Brown] was going to bring his best, because when we race each other we are both at our best,” Torrence said. “When I go up to the line I only think about racing my car and trying to beat everybody, and with the car that I have right now I feel like we can beat anybody at any time.”

Torrence qualified fourth and defeated Scott Palmer, Blake Alexander and T.J. Zizzo on the way to victory. Brown qualified seventh and defeated Doug Kalitta, Leah Pritchett and Clay Millican before reaching his sixth final round of the season.

Pritchett narrowly remains in second after a quarterfinal appearance and teammate Brown trails by just two points for the second spot in the standings.

Points leader Capps locked down his sixth victory of the season after a 4.026 at 319.67 in his NAPA Auto Parts Dodge Charger R/T to defeat teammate Tommy Johnson Jr. who ran a 4.047 at 319.90 in his Make-A-Wish Dodge Charger R/T in the final round. Capps has now reached three final rounds in the past four races, earning two victories in that span.

“This has been a season that I could not even dream about, coming off a championship and having that four- 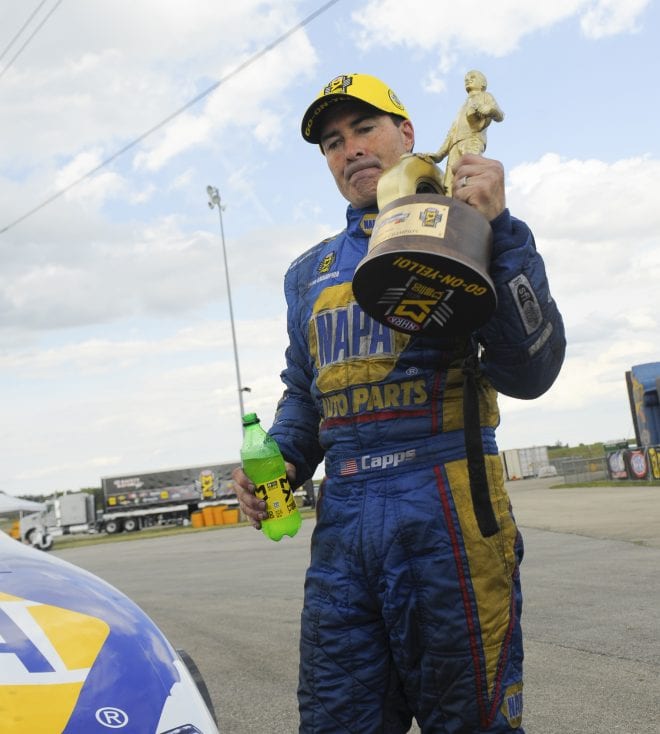 win winning streak over in the season, it’s been incredible,” Capps said. “This is not an easy place to drive since it demands a lot out of you, but my team did a great job of making adjustments.”

Capps qualified ninth and defeated Jonnie Lindberg, Jim Campbell and Matt Hagan before reaching his eighth final round of the season. Johnson Jr. qualified sixth and took down John Force, J.R. Todd and Tim Wilkerson before appearing in his second final round of 2017.

Capps holds a 200-point lead over second-place Matt Hagan, who fell in the semifinals. Jack Beckman sits in third place after making a quarterfinal appearance.

In Pro Stock, Skillman notched his first victory of the season after driving to a 6.627 at 209.23 in his Ray Skillman Chevy Camaro to defeat Erica Enders who ran a 6.655 at 207.37 in her Elite Motorsports Chevy Camaro in the final. Skillman became the ninth different winner in Pro Stock in 13 events, earning his fourth career victory. 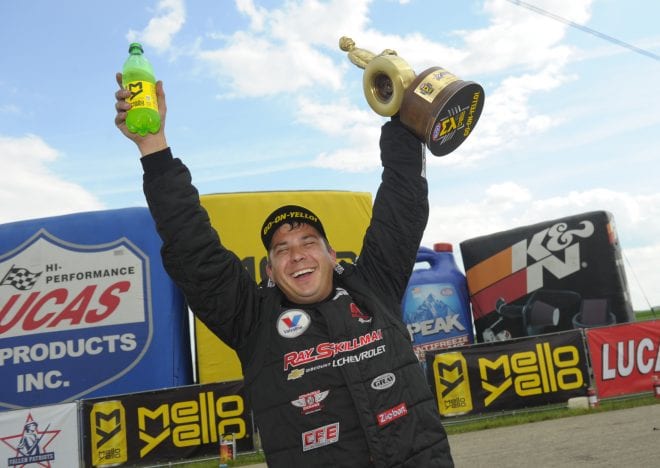 “We’ve struggled all year, but we finally put everything together and took things round-by-round,” Skillman said. “The Pro Stock division is so close now, but I definitely feel like we have finally gotten where we deserve to be with this win.”

Butner remains in the top spot of the Pro Stock standings after the semifinal appearance, while Anderson and T. Gray round out the top three. Skillman’s victory put him in eighth in the standings, while Enders now sits at sixth after her second runner-up of the season.

Points leader Tonglet secured his fourth Pro Stock Motorcycle victory in six events with a 6.835 at 195.99 on his Nitro Fish Racing Suzuki to defeat Hector Arana Jr. who ran a 6.878 at 193.29 on his Lucas Oil Buell in the finals. This is Tonglet’s first victory at Route 66 Raceway since he went back-to-back in 2010-11. He has now earned victories in all four of his final round appearances this season. 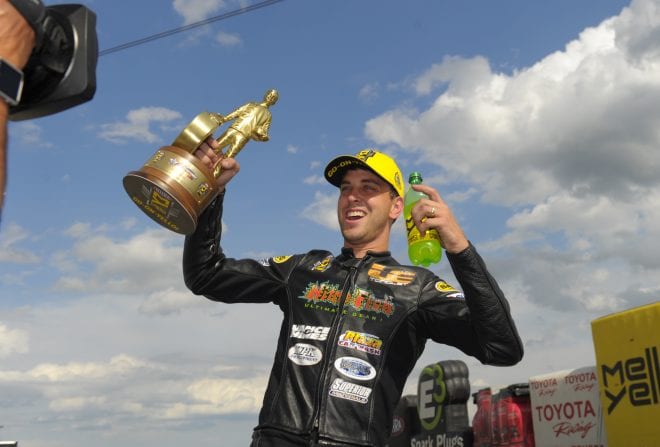 “We knew we had a good bike at the start of the season, but it was just a matter of getting tuned up as we learn more about the bike each week,” Tonglet said. “On Sunday our goal is to get win lights, so I’ve improved on being calm and staying focused to try and get the job done.”

Tonglet earned the No. 1 qualifier and defeated Cory Reed, Scotty Pollacheck and Karen Stoffer on his way to victory. Arana Jr. notched the second spot in qualifying, defeating Angelle Sampey, Angie Smith and Eddie Krawiec before earning his second runner-up finish of the season.

Krawiec remains in second following the semifinal appearance. Arana Jr. moves up to third with the runner-up, surpassing Pollacheck who fell to fourth.