Steve Torrence remained perfect in the NHRA Mello Yello Drag Racing Series Countdown to the Championship and won his fourth straight race in Top Fuel on Sunday with his victory at the 11th annual NHRA Carolina Nationals presented by WIX Filters at zMAX Dragway.

Ron Capps (Funny Car), Jason Line (Pro Stock) and Matt Smith (Pro Stock Motorcycle) were also winners in their respective categories at the fourth of six playoff events during the 2018 Mello Yello Countdown to the Championship.

Points leader Torrence went 3.703-seconds at 329.67 mph in his Capco Contractors/Torrence Racing dragster to defeat defending world champion Brittany Force in the final round, earning his ninth win in 2018 and 25th in his career. He also became the first driver in Top Fuel or Funny Car history to win the first four races of the Countdown to the Championship. In sweeping both races at zMAX Dragway this season, Torrence, who beat Chris Karamesines, Leah Pritchett and Tony Schumacher to reach the final round, opened up a commanding 169-point lead over Clay Millican with two races remaining in the 2018 season as he seeks his first world championship.

“It’s been truly unbelievable for us to go out and accomplish what we’ve done,” Torrence said. “We’re in the middle of this thing and it’s truly remarkable. I did my job today, but it’s a team and it takes the whole village to make this machine work. I couldn’t be more proud of what those guys are doing. They’re pushing me to the front and it’s pretty special to be part of. You don’t win a championship by default. You go up there and do your job when it’s crunch time. This was the biggest race of the season for us and we needed to capitalize, and we did what we needed to do.”

No. 1 qualifier Force reached her second career final round at zMAX Dragway and second this season in her Advance Auto Parts/Monster Energy dragster thanks to victories against Audrey Worm, Dom Lagana and Mike Salinas.

In Funny Car, Capps picked up his third victory in 2018 and 61st of his career after going 3.890 at 331.20 in the final round in his NAPA Auto Parts Dodge Charger R/T to defeat J.R. Todd, who slowed to a 4.311 at 214.96 in his DHL Toyota Camry. Capps, the 2016 world champion, earned his third career victory at zMAX Dragway and advanced to the final round with victories over Dale Creasy Jr., defending world champion Robert Hight and Tim Wilkerson to stay in title contention. 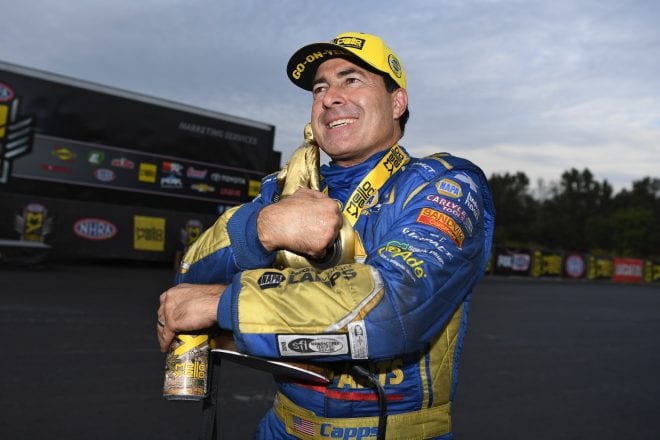 “To throw down those speeds and E.T.s when we needed it, that was very cool,” said Capps, who moved to third in points. “You’ve just got to be up for everything and I was just so glad that we did what we talked about doing. We’ve got a lot of business left and it’s not over. Anything can happen and we’re going to go down fighting. I can’t wait to celebrate and get to the next race. We’re gaining momentum and it really gives me a lot of confidence.”

Todd reached his third final round in the Countdown to the Championship with victories against Jonnie Lindberg, Cruz Pedregon and John Force. Todd, who has four wins this season, also closed in on the points lead and now trails Hight by just 11 points heading into the penultimate race of the 2018 season.

Line grabbed his first victory of the season and 48th in his Pro Stock career after going 6.531 at 211.89 in the final round in his Summit Racing Equipment Chevrolet Camaro to knock off points leader Tanner Gray. Line, a three-time world champion, became the 10th different winner in Pro Stock this season, also securing a victory for a 15th consecutive season. He knocked off defending world champion Bo Butner, Jeg Coughlin Jr. and No. 1 qualifier Drew Skillman to reach the finals.

“It’s been a struggle for sure, so I guess the good part of that is when you do finally win you definitely appreciate it,” said Line, who now has a Pro Stock-best four wins at zMAX Dragway. “I was just trying to be calm (against Gray) and cut the best light I was capable of cutting. It was a great run and our team did a great job on my racecar today.”

Gray, who had won two straight races and has seven this season, reached his 10th final round this year in his Gray Motorsports/Valvoline Camaro by defeating Alan Prusiensky, Alex Laughlin, Erica Enders. The second-year star also extended his lead to 130 points over Coughlin.

In Pro Stock Motorcycle, Smith took over the points lead after his third victory of 2018 and 21st of his career after a run of 6.830 at 196.64 on his Elite Motorsports Denso Auto Parts EBR against Chip Ellis. The points lead changed hands for the fourth straight race as Smith, a two-time world champion, jumped back into the lead for the second time during the Countdown to the Championship. He knocked off Karen Stoffer, Scotty Pollacheck and Angelle Sampey to reach his third final round in the playoffs, giving Smith a 41-point advantage over LE Tonglet. 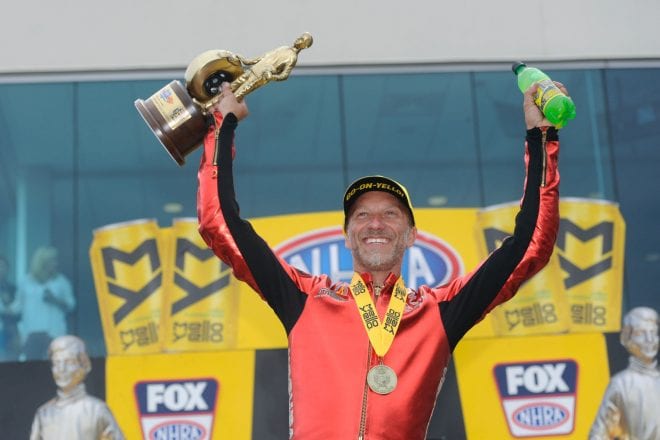 “It’s pretty big if you look at the points,” said Smith, who has two playoff wins. “I went up and raced scared in Dallas and didn’t do my job, so I figured I would come here and do my job. All in all, the bike worked great and I just had to do my job. I said it to begin with that if we can win three races in the Countdown I think we can win this championship. We just can’t have another first-round loss and we have to keep going rounds. We’re going to do everything we can to make this dream come true again.”

Ellis, who won the fall race at zMAX Dragway in 2016, reached his first final of 2018 on his Screamin’ Eagle Vance & Hines Harley-Davidson, beating Joey Gladstone, Angie Smith and Jerry Savoie before going red in the final round.

The Mello Yello Drag Racing Series continues Oct. 25-28 with the fifth race in the Countdown to the Championship, the NHRA Toyota Nationals at The Strip at Las Vegas Motor Speedway.