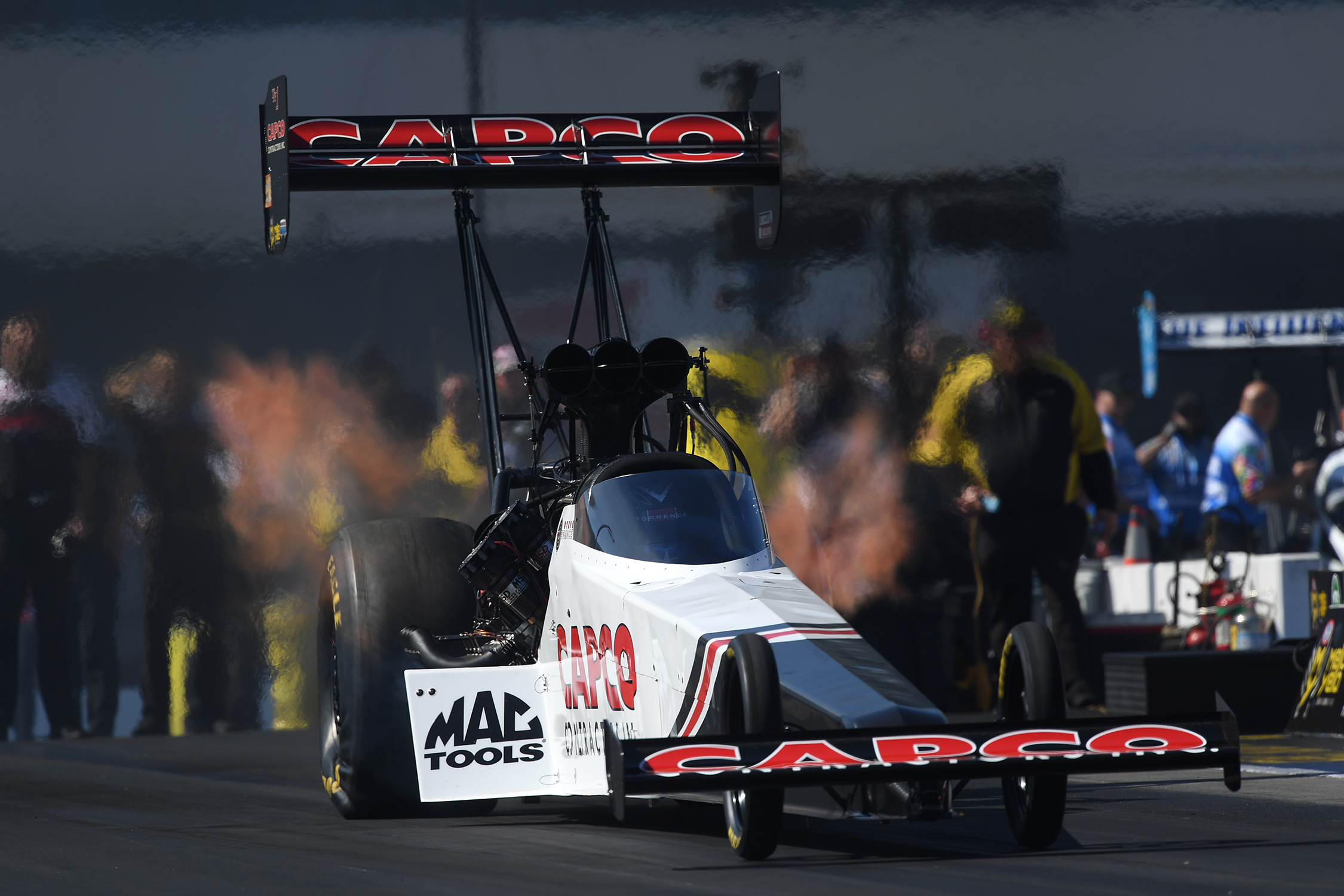 It was a shocking start to the NHRA Mello Yello Countdown to the Championship for reigning Top Fuel world champ Steve Torrence. But the talented Texan has more than made up for it at the past two races, looking back in championship form as he heads to his NHRA Mello Yello Drag Racing Series home track with another world title on his mind.

Torrence started the six-race playoffs with a first-round loss – his first opening-round loss since February and first in the Countdown to the Championship since 2016 – but those concerns immediately went by the wayside. He rebounded with a final round appearance in St. Louis and a victory on Monday in Charlotte, regaining the points lead in his 11,000-horsepower Capco Contractors dragster and putting Torrence back on track for a possible second straight title heading to Texas Motorplex for this weekend’s 34th annual AAA Texas NHRA FallNationals.

“You have to go rounds and you need to win races,” said Torrence, who has nine wins in 2019. “I think we need to win two more races to be pretty solid and have an opportunity to win another championship. We’ll just do the best we can do. I’m looking forward to going to Dallas. It’s a good time right now having the momentum going back-to-back. We need to try to go there and carry this momentum and see if we can be successful.”

Torrence (Top Fuel), Robert Hight (Funny Car), Tanner Gray (Pro Stock) and LE Tonglet (Pro Stock Motorcycle) were last year’s winners of the event that will be televised on FOX Sports 1 (FS1) in 2019, including live final eliminations coverage 2:00 p.m. (ET) on Sunday, Oct. 20. It is the fourth of six playoff races and 22nd of 24 races during the 2019 NHRA season, and Torrence appears to be building toward another big finish after his Charlotte win.

Torrence qualified No. 1 at the race and then beat his closest competitor, veteran Doug Kalitta, in the final round. It gave him 36 career wins, with 28 of those coming since 2017. It’s an incredible pace he’s kept, but Torrence has simply tried to stay in the moment. He credits crew chiefs Richard Hogan and Bobby Lagana for keeping him locked in, especially as the pressure rises with each race during the Mello Yello Countdown to the Championship. 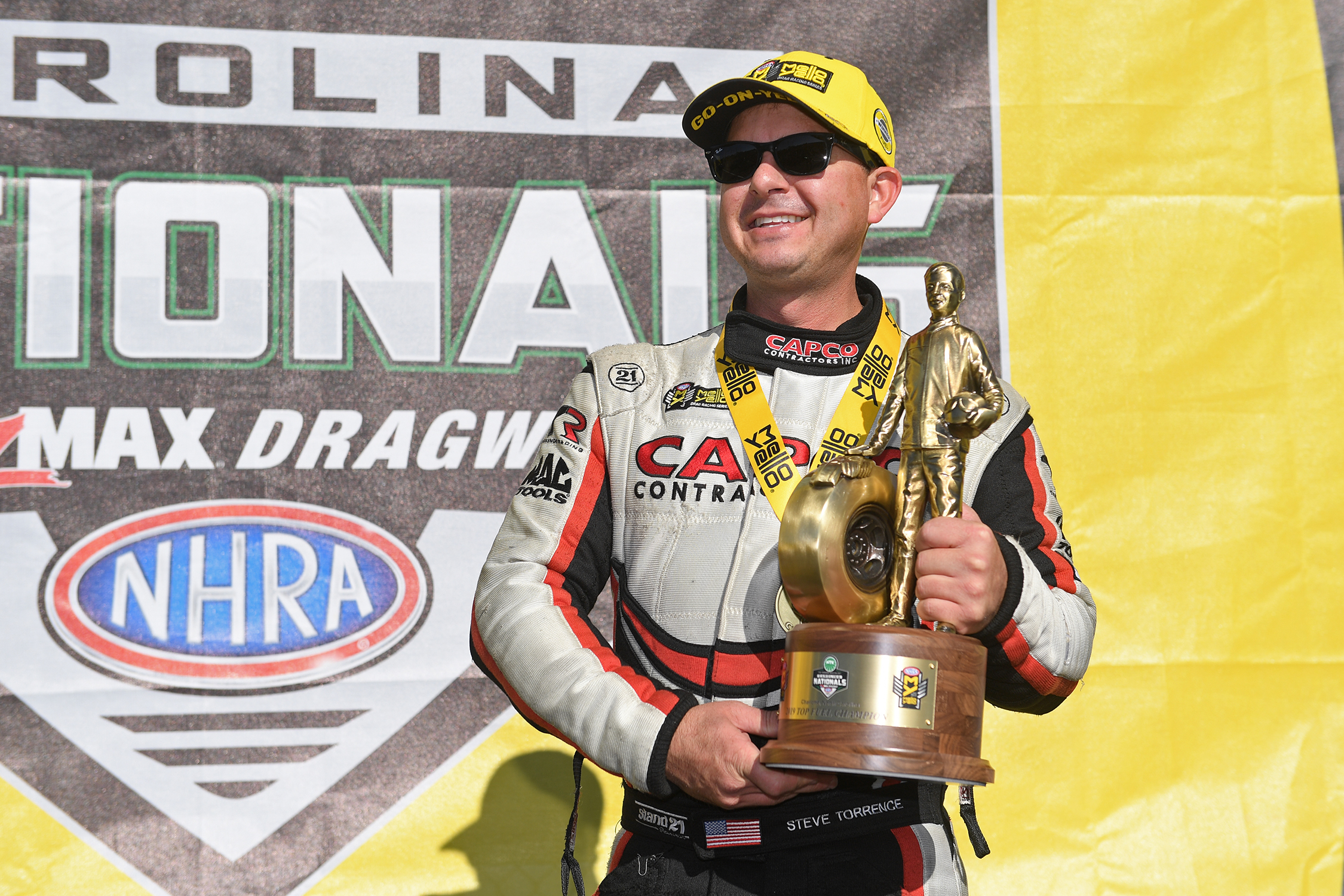 “You can allow yourself to succumb to the pressure or you can look at the situation for what it is,” Torrence said. “You don’t do anything differently in the last six races that you did the first 18 (in the regular season). You just keep that mindset and you can’t lose focus with what you’re doing. You just have to block out who that guy is, whether it’s Doug Kalitta or Tony Schumacher or Doug Kalitta, or whoever. You can’t let what or who’s in the other lane influence you.”

Torrence will aim to be ready for the task at hand in Dallas, where he will look for a second career Top Fuel win. He stretched the lead to 30 points over Kalitta with the Charlotte victory, but it is far from over. Brittany Force, the 2017 world champ and Dallas winner, is still in contention and remains 92 points behind Torrence. Kalitta is hungry for his first career world title, but Torrence is simply worried about pushing forward and maintaining consistency. It’s a formula that’s worked almost perfectly the last two seasons, and Torrence has no reason to change it.

“We don’t run the big numbers, but we go out and try to race to win,” Torrence said. “I’d rather turn win lights on than have pretty time slips. We didn’t have the start to the Countdown we wanted, but we got it turned around. Ultimately, you need to go out and try to win all of them. We just need to maintain our consistency. We stumbled in Reading and maybe we had relaxed a little too much. We redirected our focus and got back on the same page (in St. Louis) and went back to what got us to that point.”