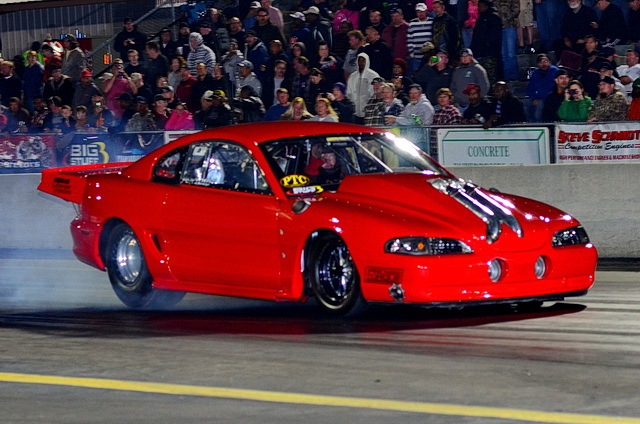 Drag Illustrated Sr. Editor Ian Tocher doesn’t miss many of Donald Long’s drag radial extravaganzas at South Georgia Motorsports Park and Lights Out V was no exception. But while clearly a fan of the small-tire action, he freely admits to a certain amount of confusion over what constitutes a real record as opposed to just the quickest pass ever made by a single-turbo, four-speed red Mustang with blue carpeting and a new air freshener. Therefore, his picks simply reflect what he thinks is cool; nothing more, nothing less. RECORD SETTER

Okay, I don’t know how the twin-turboed, Hemi-powered ’97 Mustang of “The” Kevin Mullins didn’t get the nod from either of my esteemed DI colleagues, but it was hands down the baddest car on the SGMP grounds. This one really is a record setter, folks, with Mullins going an incredible 4.117 at 193.90 mph on little drag radials to qualify number one in the marquee Radial vs. The World class. He’d already posted a 4.16 that shattered the previous record to prove it was no fluke, but since it wasn’t within the required one percent to make it official, Mullins went out in Saturday night’s opening round of eliminations and laid down another 4.11 with a 3 at an even faster 194.30 to put an exclamation point on the effort. It’s just too bad the rest of the race was rained out because Mullins felt sure–if conditions allowed–he could run in the 4-ohs before the weekend was over.