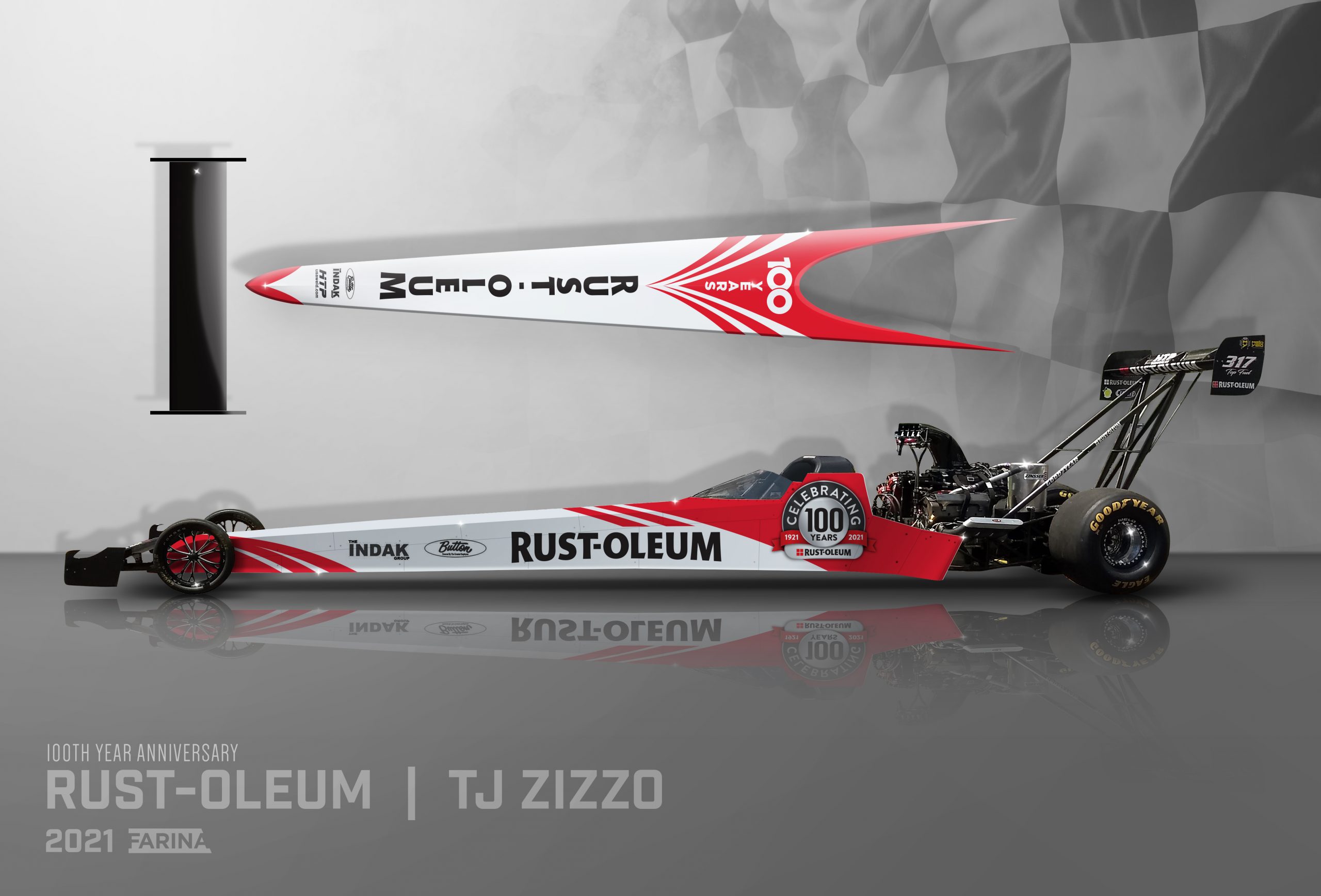 The anticipation and enthusiasm has been building for months as TJ Zizzo and the Rust-Oleum Top Fuel team prepare for their first race of the 2021 NHRA Camping World Drag Racing Series season during this weekend’s upcoming Lucas Oil NHRA Nationals at Brainerd International Raceway (BIR). The Chicago-based team, which hasn’t competed since the Midwest Nationals in St. Louis last September, has been working diligently to maintain and improve on their level of success which has steadily improved since 2019. Last year the team reached their first final round during the NHRA Summernationals.

“Preparing for a race to compete at the highest level is a lot of work,” said Zizzo. “We have been working multiple 100-hour weeks leading up to this race. My wife is mad at me, but my kids still like me which is great.  It is not just me that is working so hard, it is the entire team. They work a full day at their jobs, then they come to our race shop. We haven’t been thrashing to get ready, this has been a continuous planned process. We are constantly working on our race car. We work this hard so when we get to the track in Brainerd we can pull this race car out of the trailer, start it up and pick up where we last off last season with a strong performing Top Fuel dragster. We ran well in St. Louis and we’ve been running well since 2019 honestly.”

A new-look Rust-Oleum Rocket race car will be unveiled for this race. The Top Fuel dragster will be highlighting 100 years of Rust-Oleum. The long-time Zizzo Racing sponsor continues to maintain a strong business to business and promotional relationship with Zizzo Auto Body and Zizzo Racing.

This will be Zizzo’s third appearance racing at BIR. He qualified at each of his previous two appearances in 2004 and 2013 but did not advance beyond the first round. The Rust-Oleum team will be looking to improve on previous efforts and their expectations are lofty. The team spent the Sunday before the race putting the entire team through the paces, starting, servicing and rebuilding the Rust-Oleum Rocket 11,000 horsepower race car.

“The guys fired the car twice at our shop and we went through all our paces, even to the point of strapping me into the car and getting organized. When we fired the car for the first time there were no hiccups. It has been apart over the winter and we did some rewiring and some reconfiguring. Even with those changes everything worked like clockwork. To see these guys get back at it like that was remarkable,” said Zizzo. “We wanted to be sure the seat belts were all good and I could still fit in the cockpit. It is tough to stay on weight as you get older and it is a constant battle. I am a little off my goal weight but I am still working on that.”

Jumping into the season at the twelfth race does not deter Zizzo from his plans for success. Balancing a schedule that including running a successful auto body shop outside Chicago and maintaining a top-tier Top Fuel team is a challenge Zizzo relishes.

“Everyone says ‘win’ when you talk about your expectations. That drives me crazy when I see that because of course everyone wants to win,” said Zizzo. “We are going to put one foot in front of the other and we have lofty goals all the time. Sometimes my dad thinks our goals are extreme, like (Sunday) firing the car twice and trying to get things loaded and organized. We don’t quit over here. We just keep on pushing.” 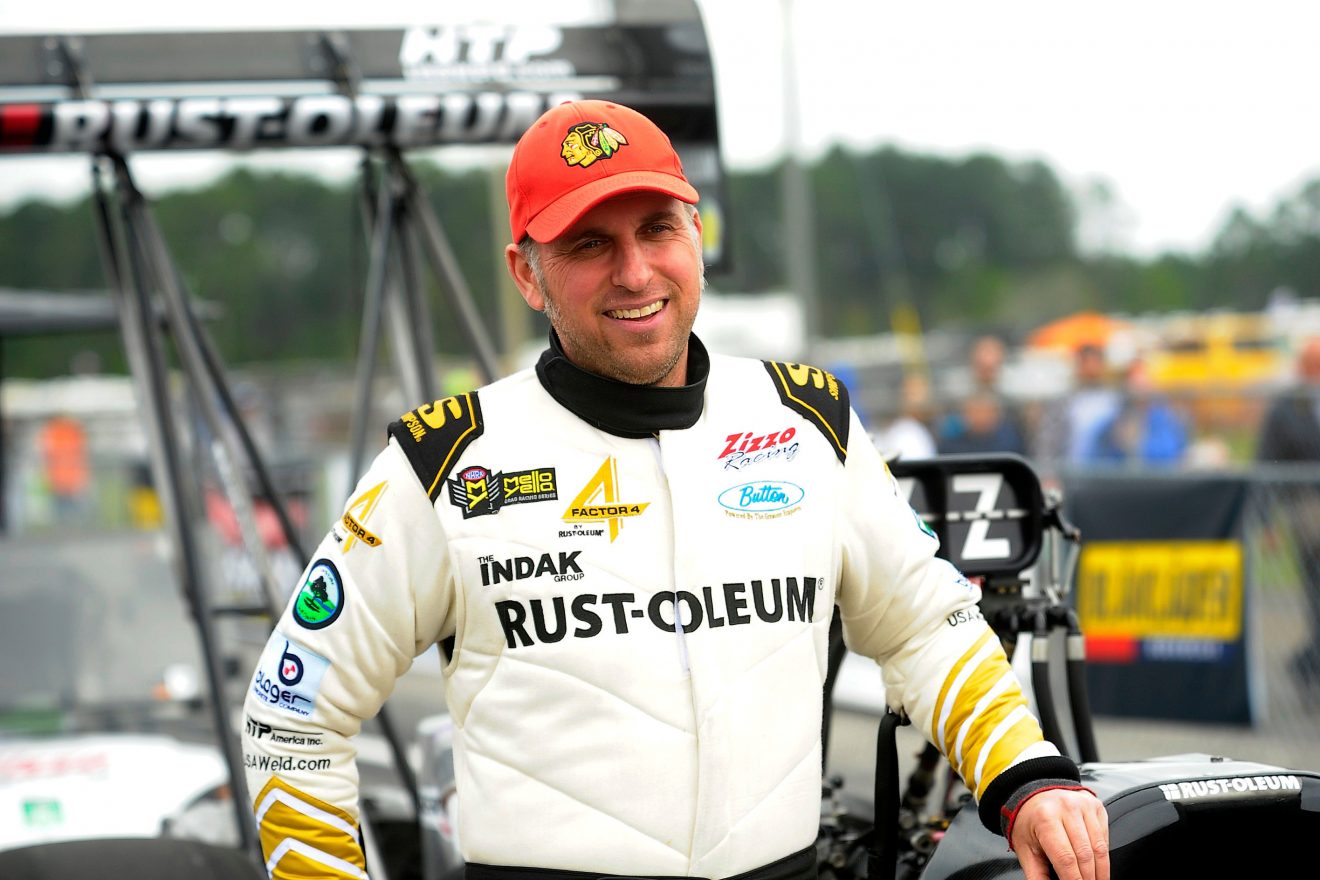 “Ultimately a goal for Brainerd would be to run 3.75 seconds, weather dependent of course, right out of the trailer. We just want to make good quality laps. You still need to have some luck in this sport and every winner that gets to the finals had to fight their way there. You need one little lucky break, too. We are going to put ourselves in position to take advantage of any break we get. We want to turn win lights on. We are working incredibly hard to go to two races. We might put more effort and time to go to two races than some team put into getting to 12 races. We are nuts, but we enjoy what we do.”

There has been minimal turnover on Zizzo’s crew and this season they had added world championship crew chief Rahn Tobler to the mix to work with long-time Rust-Oleum crew chief Mike Kern. Tobler has been a sounding board in the past for Zizzo and Kern but this official alignment will give the team an added experience boost that will continue their positive improvement.

“Having Rahn in out pits will certainly be a help. He has been a friend of ours for a long time,” explained Zizzo. “I like the idea of Mike being able to talk to someone other than me or Tony Smith. He is someone that has been there and done that. A lot of teams have three crew chiefs and Mike has put this team on his shoulders this entire time and done great. I am excited he will have someone else to bounce ideas off. Rahn has always been there to help but now to be in our pit area full-time will be different than being a couple haulers over.”

The team will hit the track with serious focus on Friday when the Lucas Oil NHRA Nationals begin. With one qualifying session in the evening and then two qualifiers on Saturday Zizzo has a plan for success. It is a plan he has been executing every season for well over a decade.

“After the first pass I will get out of this race car and ask myself ‘What was that?’,” joked Zizzo. ”Everything will fall into place pretty quickly for me.  I might be the weak link on Friday night but the guys will be on it. We will also have a Rust-Oleum plant manager from Minneapolis as a guest of the team. That is always exciting to show off what we do for our sponsors. It will also be nice to see my racing friends and family. I can’t wait to see (Capco Top Fuel team crew member) Dom Lagana in person. I text him all the time. We are good friends off the track. I haven’t seen him in over a year. That will be fantastic.”