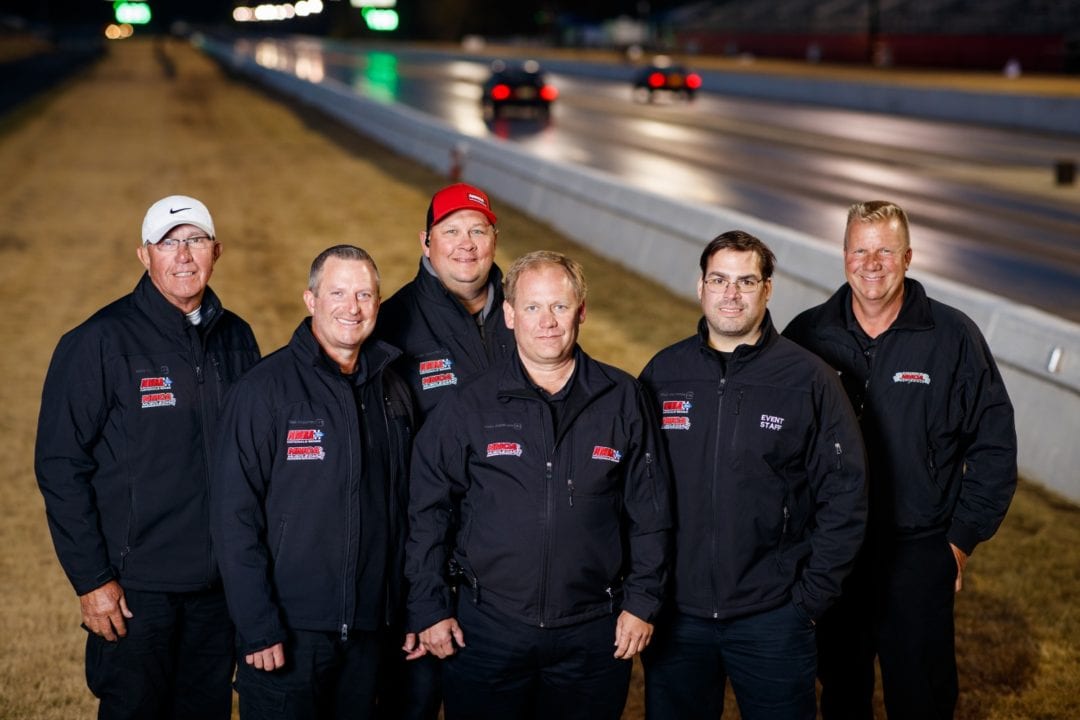 One person can only accomplish so much on their own, but if they surround themselves with a team of other talented, competent, and motivated individuals, together the group can achieve greatness. Steve Wolcott, president and CEO of the National Mustang Racers Association (NMRA) and the National Muscle Car Association (NMCA) is a prime example of how one can make a big impact simply by focusing on the value of teamwork as his organizations have had a dramatically positive influence on the sport of drag racing.

Growing up in northern Hollywood, right down the street from NHRA’s former headquarters, Wolcott, now 50, always had an interest in cars. “I bought an ’85 Mustang GT when I turned 19 and kept it for about 10 years,” he shares. Originally, he didn’t set out to change the world. Instead, he studied history at UC Santa Barbara in his home state of California. Wolcott graduated in 1990 and wound up getting into advertising sales with Petersen Publishing selling small ads in the backs of magazines like Hot Rod, Car Craft and more. “I had a lot of great mentors like John Cobb, Ralph Panico, and John Diana, and was able to grow as a result of their help.”

Around 1998, Wolcott was promoted to publisher of 5.0 Mustang & Super Fords and Max Speed magazines and traveled to lots of races and events as a result, including the Holcomb Motorsports 5.0 Civil Wars at Rockingham Dragway in North Carolina, and the first World Ford Challenge at Beech Bend Raceway Park in Bowling Green, Kentucky. 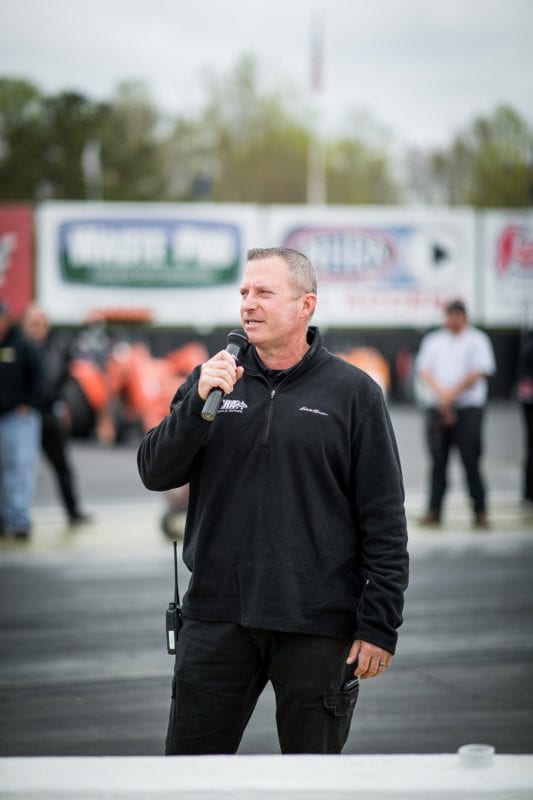 “Those events are really what got me interested,” Wolcott recalls. “James Lawrence [current owner of Power Automedia] was the associate editor and helped me get in tune with who racers are. We got to talking about events and came up with the idea for the NMRA. There was this movement going on surrounding late model Mustangs, and no association for them.” Wolcott and Lawrence saw the opportunity to create one and believed from what they saw with the magazines that there would be a lot of support from racers and the community as a whole – they were right.

Towards the end of 1998, the two men quit their jobs to focus solely on their new idea. The NMRA’s inaugural season in 1999 included events in Phoenix, Arizona, Bowling Green, Kentucky, and, incredibly, the Ford Motorsports Nationals at Maple Grove Raceway in Pennsylvania thanks to an invite from George Case, who believed in what Wolcott and Lawrence were trying to do. “The 1999 NMRA Ford Motorsports Nationals was a huge hit. Billy Glidden raced Pro 5.0 and won, and guys like Don Walsh Jr, Joe DaSilva, Job Spetter Jr, and more came out to support us,” Wolcott proudly remembers of the year that started it all. Additionally, Race Pagesmagazine was also launched that year to provide coverage for the series and its participants.

Amazingly, NMRA’s initial success was so huge that the following year, the schedule had grown from three races to five, and a championship series with a contingency program was added for the 2000 season. “The racers really responded to what we were doing. They wanted something different, something more professional, and we were able to provide that,” adds Wolcott. Early on, the organization gained attention from big-name manufacturers and companies like Nitrous Oxide Systems and Edelbrock stepped up for sponsorship.

While NMRA was flourishing, the NMCA (which had been established in 1988 by Russ Smeltniks) was facing an uncertain future and had changed hands several times as a result. Wolcott received an offer to purchase the organization, and he did not hesitate to say yes. In early 2005, NMRA’s parent company, ProMedia Publishing, officially took over the NMCA and helped shape the sanctioning body into the world-class series that it is today.

Over the years, the NMRA and NMCA have grown tremendously and led the way in street-legal drag racing and events and publishing, but it wasn’t just through Wolcott’s wisdom. A major transition in 2013 inspired Wolcott to rebuild the team, and he chose to surround himself with a top-quality group of people who are dedicated to the sport of drag racing and carry with them an incredible abundance of information and expertise.

“We brought on Rollie Miller, our national event director, and Gene Bergstrom, who works as our operations director and has 30-plus years of experience with NHRA. Mike Galimi takes point on our marketing and editorial content, and lots of other great people with a passion for the sport,” Wolcott elaborates of the group that makes his associations great. 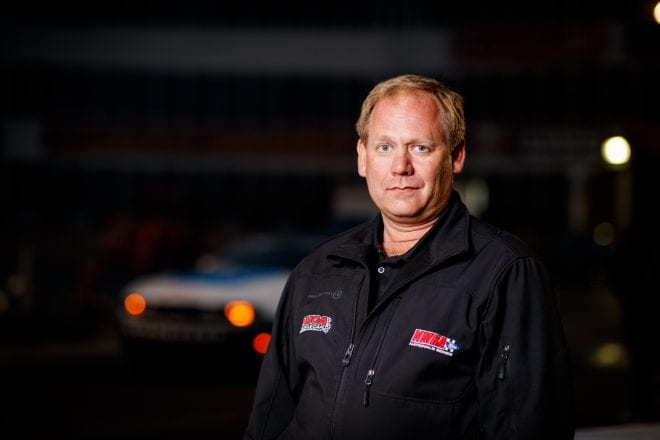 Wolcott carefully selects each member of the ProMedia family to ensure there’s a great blend of firsthand experience with racing as well as a solid business sense for how things should be run in a professional manner. He also isn’t afraid to be in the trenches with his staff and puts in long days while retaining his positive outlook and trademark optimism. He is a leader helping to pull with his team through encouragement and example, not a boss who sits back and just pushes.

The persons (and personalities) behind the scenes are integral to both NMRA and NMCA’s success, and Wolcott focuses on continuous improvement as much as possible. Investing in his team ultimately means a better overall experience for his racers, and Wolcott hired on TJ “El Prepe” Bailey (later succeeded by Jake Green) as ProMedia’s official starter. Kurt Johnson of Total Venue Concepts was brought on board to provide exceptional track prep services, and quality technical directors, including Lonnie Grim and Dave Werremeyer, make sure that everyone stays safe and legal.

Wolcott credits Norwalk, Ohio’s Bader family for much of his inspiration and motivation behind providing a world-class customer service experience to racers and fans at his events. “I was blown away by Bill Bader Jr.’s attention to detail with customer service and how he runs his events, and my goal with the NMRA and NMCA was to be what Summit Motorsports Park is to venues but with sanctioning bodies instead,” he articulates. 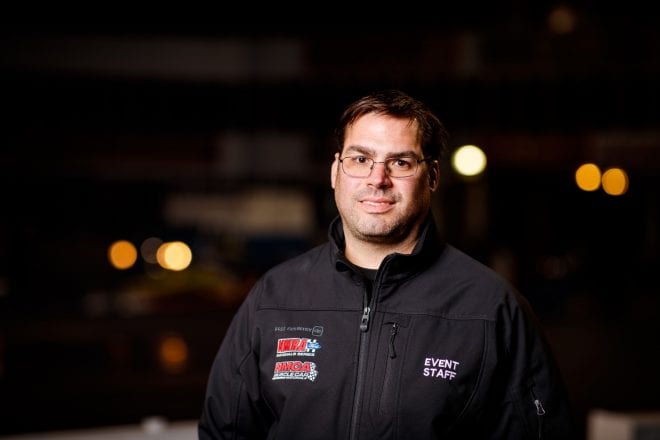 (both print and digital), merchandise offerings, race-day operations and more, is strictly monitored to find room for improvement. “When we were coming off the recession, many businesses were trying to figure out what the least they could spend on something was, but we changed our mindset to instead figure out what is the most we can afford to spend so that the product we provide is the best one possible for our participants,” Wolcott continues. “As a business, though, we’re fairly conservative and invest only where we need to – because I want to ensure we stay around long term to continue to be able to provide for our employees and their families.”

He adamantly believes that the key to success is working as a group, and values community and collaboration over competition. “A rising tide lifts all boats, so we work with other media outlets like Drag Illustrated, Speed Video, and more, to help get exposure for everyone, everywhere. We open our series to everyone, and if we do our jobs correctly, we’ll all grow,” he shares of his beliefs that independent entities should work as allies to benefit the sport of drag racing as a whole.

Over the years, NMRA and NMCA have had a significant hand in helping improve the performance of muscle cars as a whole. “Because we offer a consistent program, purse, and contingency program, racers can push their combinations,” Wolcott proclaims. Additionally, by giving manufacturers a platform with which they can challenge themselves to manufacture better parts, that too has helped the evolution of performance. “Now, an 8- or 9-second car isn’t the abnormality, it’s common – and it was even considered crazy fast back in 2000.”

For Wolcott, though, what he’s most proud of is NMRA and NMCA’s longevity. “We are #2 in drag racing, just behind NHRA, and we love being in that position because NHRA is the pinnacle and we have the world’s fastest street cars. We’re all about relatability for the fans and manufacturers,” Wolcott says of his organizations, which allow grassroots-level racers and world-famous wheelmen to compete at the same national events, with street-car-centric classes all the way up to Xtreme Pro Mod for record-setting doorslammers. “We offer stepping stones. You can come and race True Street, then move into an Index category, and then go class racing in Renegade. I’ve seen it happen countless times.”

The momentum that NMRA and NMCA have right now is nothing less than astounding. Their programs are being recognized and rewarded for being professional, reliable, consistent and welcoming. “I feel bullish and very optimistic for the next 10 years of NMRA and NMCA –  we’re on the evolution of a big growth curve,” Wolcott eagerly announces. “Guys like Chuck Watson, Carl Tasca and Scott Libersher love our events. Craig Sullivan had sponsors come to him simply because he was racing with us.”

NMRA and NMCA recognizes the importance of sponsors, both for the series itself as well as its participants, and has an industry-leading sponsor program in which it makes high-resolution images and video content from each event available to sponsors, free of charge, to use as they see fit in advertisements, catalogs and other marketing materials. It’s a win-win situation for everyone involved. 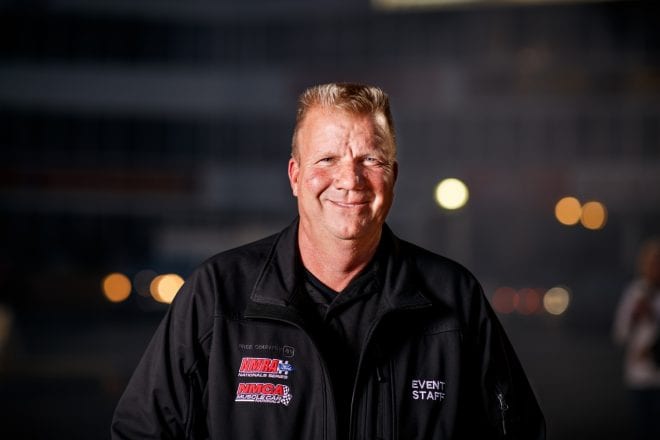 As NMRA approaches its 20th year, and NMCA celebrates its 30th, the future is looking brighter than ever. Wolcott is unquestionably committed to his racers, his staff and to the sport itself. “You never know what will happen next, so we have to sharpen our pencils and never rest on our laurels,” says the man who started a racing revolution when he was just a young kid with a dream. “The number one thing I most appreciate is our incredible racers, because, without them, we would not have the great show that we have. Everything myself and our staff does is for our racers, our fans, our sponsors, our partner race tracks, and our media partners.”

Wolcott hinted that his associations are looking to expand the number of events they run in the near future (currently NMRA and NMCA each contest championship titles at six races, with two races each year being combination NMRA/NMCA events) due to high demand and the popularity of his programs. “NMCA was the best-kept secret the past 10 years, but now it’s out of the box,” he smiles. “The Street Outlawstelevision series, Donald Long’s events, and the rise of No-Prep racing have really helped grow the awareness of street car drag racing in general and we are capitalizing on it to benefit our racers.”

The support that Wolcott’s NMRA and NMCA receive from the entire aftermarket – sponsors, manufacturers, racers, friends – has been instrumental in guiding the associations’ growth. Racetrack partners, including Alan Chervitz and Todd Dickinson at Florida’s Bradenton Motorsports Park and Dallas Jones at Kentucky’s Beech Bend Raceway Park, have volunteered their help and knowledge to help promote events, and more.

“We live in the greatest country in the world, and God has blessed our associations,” adds Wolcott, who has a church service on-site every Sunday morning at each event. “We still fly the flag and sing the Anthem and do an invocation at each race, and that will never change.” With his beliefs firmly rooted in giving back to those who support him, and doing right by everyone involved, Wolcott’s old-fashioned ideals are spawning a new era as NMRA and NMCA continue to grow, thrive and make history within the sport of drag racing.