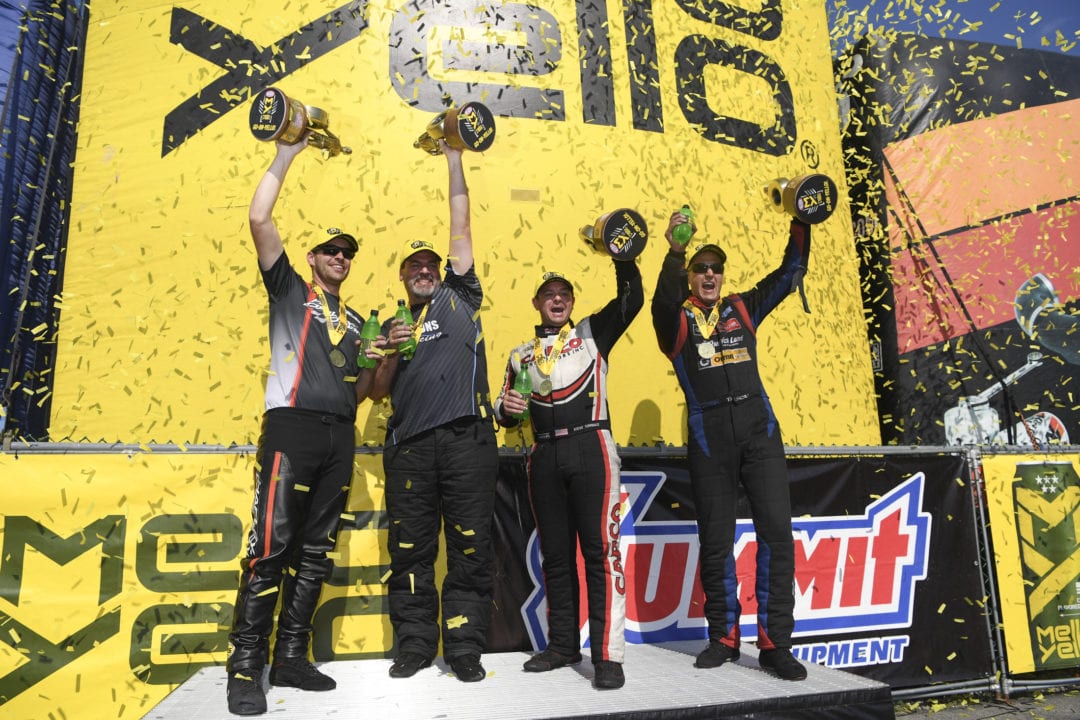 Tasca, who won for the first time in nearly seven years last weekend in Bristol, waited just seven days to pick up his next victory, making it two in a row by going 4.383-seconds at 245.09 mph in the final round in his Motorcraft/Tasca Parts Ford Shelby Mustang. It is the sixth career win for Tasca, who reached his 14th career final round on Sunday with wins against Matt Hagan, Paul Lee and John Force.

Beckman, who slowed to an 11.764 at 77.85 in the finals, knocked off Jonnie Lindberg, Shawn Langdon and Tommy Johnson Jr. to reach his 59th final round.

“I worked a lot of years to get to this place and there were days I never thought I would get back here, but I never gave up and I thank the people that never gave up on me,” Tasca said. “I always knew if I could get the right car under me we could do great things. I woke up this morning and was as confident as I ever was, and when you make four runs in the 3.00s in very challenging conditions, there was no reason why we couldn’t have won. I’m glad we got it done.” 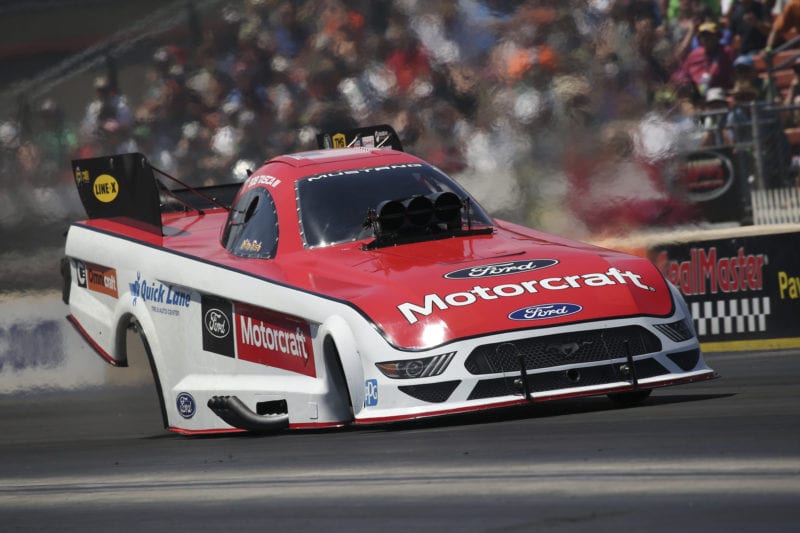 In Top Fuel, defending world champ and current points leader Torrence continued his dominant stretch, powering to his sixth win in the last seven races and 33rd in his career with a run of 3.832 at 323.27 in his Capco Contractors dragster to beat Pat Dakin’s 3.909 at 301.40. Torrence, who was nominated last week for Best Driver at the 2019 ESPY Awards, reached his seventh straight final round by beating Jordan Vandergriff, Doug Kalitta and Brittany Force, with the semifinal win giving Torrence his 300th career round win.

Dakin, who advanced to his first final round since 1998 and was looking for his first Top Fuel victory since 1973, reached the finals after beating Mike Salinas, Terry McMillen and Leah Pritchett.

“Some days you come out here and you just feel really on top of your game and some days you’re a little slower and today was one of those slow days,” said Torrence, who won for the second time in Norwalk. “But my guys had my back and we went down the track four laps in a row. This is completely a team sport and without those guys working on the car, it’s nothing. I’m just proud to drive it.” 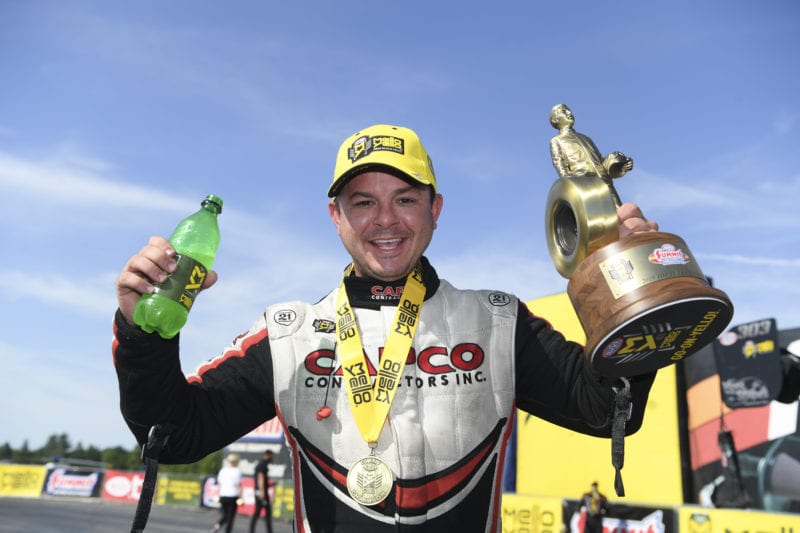 Pro Stock’s McGaha picked up his first win of 2019 and eighth in his career with his winning run of 6.620 at 210.11 in his Harlow Sammons Chevrolet Camaro to beat Alex Laughlin’s 6.668 at 208.75. McGaha reached his 11th final round thanks to wins against Wally Stroupe, Greg Anderson and points leader Bo Butner.

Laughlin earned a berth in his fifth final round by topping Rodger Brogdon, Jason Line and Jeg Coughlin.

“We just kept taking the same car up there all four rounds,” McGaha said. “I had a bad light in the first round and in the second round, I was a little better on the tree. I botched the burnout really bad in the semifinals and I’m sure everybody thought we were done, but next thing you now we let it rip and won that round.”

Five-time Pro Stock Motorcycle world champ and points leader Hines rolled to his fifth win of 2019 and class-best 53rd in his career, going 6.895 at 196.99 in the final round on his Screamin’ Eagle Vance & Hines Harley-Davidson to beat teammate Eddie Krawiec’s 6.967 at 196.64. It was the 26th time the standout teammates have met in the final round, with Hines winning for the 12th time.

Hines’ day started with round wins against Marc Ingwersen, Angelle Sampey and defending world champion Matt Smith. Krawiec reached the final round for the 83rd time by knocking off Michael Ray, John Hall and Scotty Pollacheck.

“We had different conditions today than the rest of the week, but for some reason my bike tends to work well on a greasy track,” said Hines, who won for the fifth time in Norwalk. “The competition is tough and you have to earn it each round. Our guys do a great job making sure we have phenomenal motorcycles. (Racing Krawiec) has brought out the best in both of us. That’s probably why we have as many wins as we have. We push each other to be that much better.” 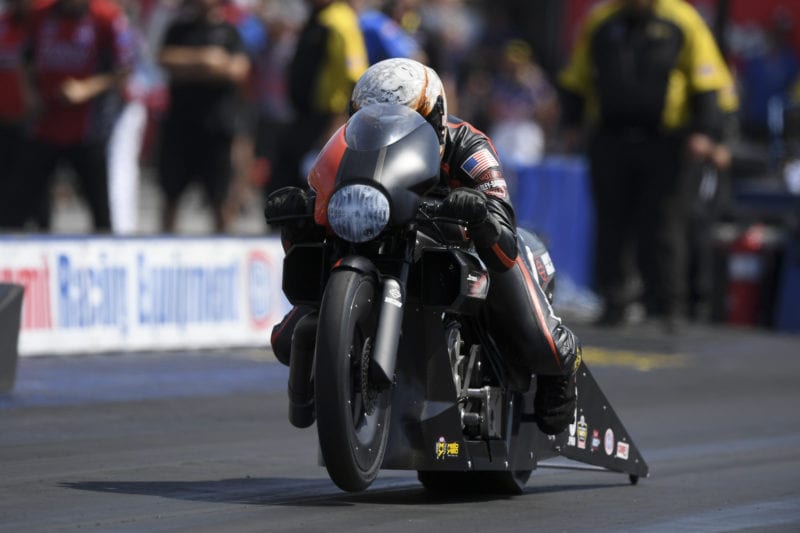