With Mother Nature cooperating, the very first “call out” event at historic Piedmont Dragway took place Saturday, March 30. The brainchild of track general manager Kevin Shipmon and presented by Bryant Industrial Crane & Rigging, the idea was to take the drivers who ran in the 3-second zone during the 2018 season and allow them to call out anyone below them in points. That meant points champ Brian Shrader could call out anyone below him. Second in the 3’s was Tim Lawrence, absent in order to finish his Camaro for the 2019 season’s competition. Bubba Turner, in the Jimmy Greene “Rentman II” Firebird, was the other driver in the 3’s, so he would call out next, and so on down the list. But that old nemesis “breakage” reared its ugly head. Brett Nesbit was also unable to attend due to a broken radiator. 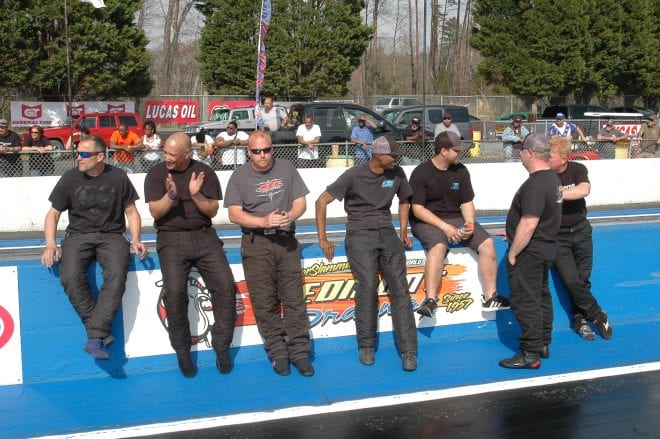 This enabled the following drivers to participate: Brian Shrader, Bubba Turner, Cam Clark and Justin Wall. Those also included were Tommy Payne, Scott Lang, Ronnie Gardner and Travis Harvey. Harvey and Gardner showed up with brand-new cars, with Harvey putting together the “old band” of himself, Russ Farmer, Jeff Miller, Rocky Raynor and the return of Vaughn Miles.

The first round went as follows: Shrader called out a broken Clark. Turner called out Payne with Turner blowing off the tires and Payne running a personal-best 4.10 ET with one carburetor. Harvey ran a 4.21 to defeat Lang’s 4.36 and Gardner gave notice to all with a 4.02 over Wall’s 4.19. 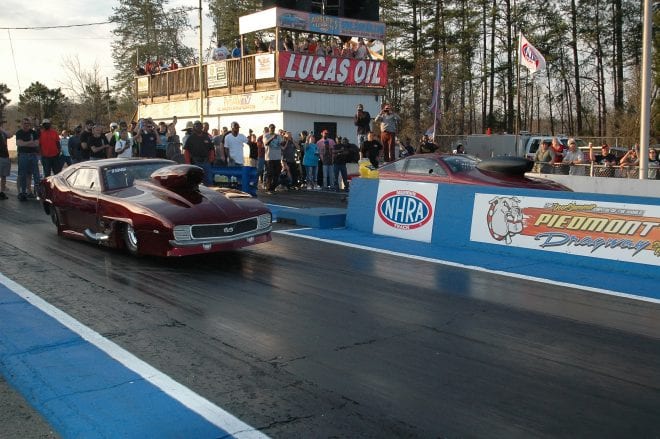 In the second round, Gardner got the first call-out and used a 4.07 at 182 mph to defeat a broken Payne. Shrader’s 4.18 fell to Harvey’s identical 4.07. This set up the final with two of the best ever to race in “The Big Dog Shootout.” Ronnie “Superman” Gardner in Jack Gaddy’s “Sometime Racing” Camaro used a 4.03 at 182 mph to defeat a respectable 4.0 from the “Dream Team” GXP driven by the “Carolina Kid,” Travis Harvey. Bryant Mariner presented the “Dog” to the Gaddy team, all the while serving notice that his car, “The Hook” driven by Dane Wood and powered by Billy Albert power, would be competing in the series this season. Should be great.

The other winner of the day was Brandon Thompson in his Pinto winning Rico’s Real Street. Don’t forget the April 17th first edition of historic Piedmont Dragway’s Big Dog Shootout for the 2019 season. Rest assured that all of these drivers will have the cobwebs worked out and the competition should be intense. See you then.