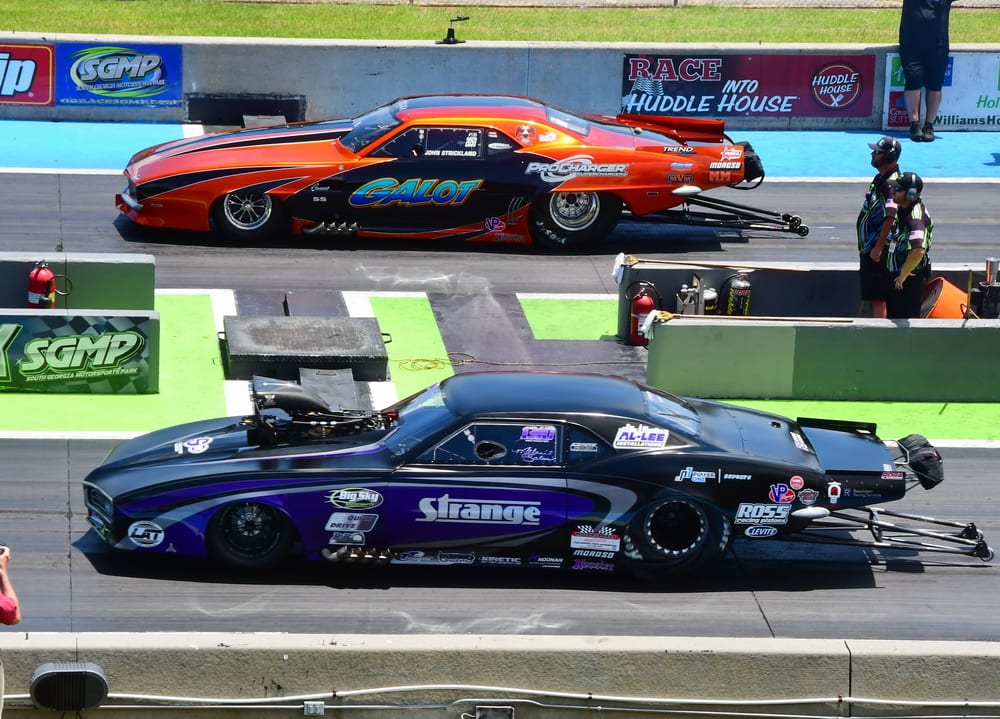 Despite not qualifying for the eight-car field, Moroso Pro Boost driver John Strickland picked up the event win at the Professional Drag Racers Association (PDRA) Summer Nationals Ignited by Lithium Pros Batteries. Strickland was racing as an alternate at the South Georgia Motorsports Park event, which was completed Sunday afternoon.

In the Jr. Dragster classes, Parrish, Florida-based Lauren Sandrey went a 7.911 in the Coolshirt Pro Jr. Dragster presented by Knoxtown Products final round to defeat Carlisle, Pennsylvania’s Christopher Powers II, who narrowly broke out on the 7.90 dial-in with a 7.899. The Gilbert Motorsports Top Jr. Dragster win went to Alyssa Rabon in a double breakout final round, with Rabon going 9.097 on a 9.10 dial-in and Budd Trammell II running 7.896 on a 7.90 dial-in.

At various points in the weekend, John Strickland wasn’t sure he would even get to race in the eight-car Pro Boost field. First, he was bumped out of the field from the No. 2 spot in the second and final qualifying session. Then he was inserted into the field as an alternate for Terry Leggett, who walked away from a fiery incident in qualifying, but Strickland originally couldn’t stay for Sunday’s rain-delayed eliminations.

But he was able to shuffle around plans and his GALOT Motorsports team worked through their struggles to end up in the winner’s circle Sunday afternoon. In the final round, Strickland drove his ProCharger-boosted ‘69 Camaro to a 3.781 at 199.79 to eliminate Melanie Salemi and her 4.107 at 139.91.

“We’ve had some lucky breaks this weekend,” Strickland said. “We went from being the No. 2 qualifier to not being in the show. Due to Mr. Terry Leggett’s misfortune, we were able to get in. The car threw us all kinds of curveballs this morning and the crew’s done a great job overcoming the electrical problems and getting us here. As a driver, I did a good job up until the final round. I almost gave it away there, but it worked. A lot of luck played a big part in this all weekend.” 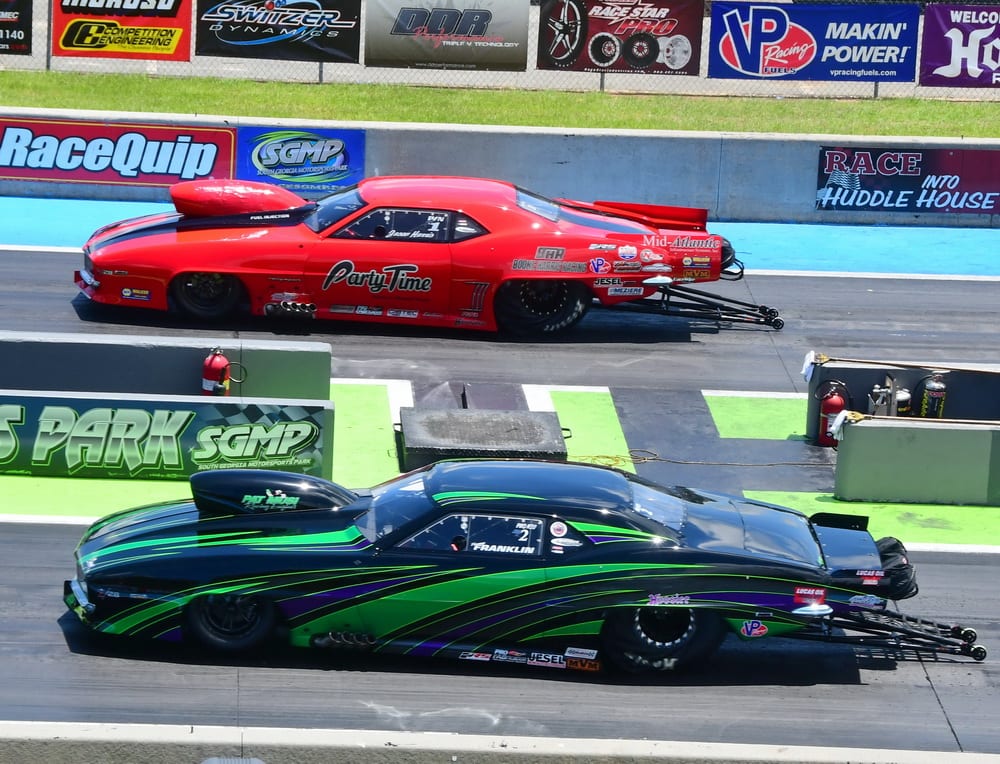 Two-time and defending Pro Nitrous world champion Jason Harris used his consistent, A-to-B strategy to take the Boone-Harris Racing “Party Time” ‘69 Camaro to his first win of the season. Harris, who also went to the final round at the season opener, defeated fellow two-time world champion Tommy Franklin in the final round. Harris left the starting line first by five thousandths and rode out a safe 3.936 at 188.70 alongside Franklin, who broke traction and slowed to a 4.639 at 118.04.

“We came into race day and we had been struggling with the hot weather conditions,” Harris said. “We lost our back-half performance and we’ve been chasing these guys running 207 mph out the back. I’m a good player at 201, 202 (mph). Then we found our 60-foot performance again, so it all came together. Then it became a tuner’s game. We really wanted to get down the track. Tommy had the car to beat all weekend. You just had to be smart and play the game, and that’s what we did. I can’t thank the Boone family enough for sticking with me, as well as Hoosier Racing Tires, VP Racing Fuels and Walker Auto Parts. It just feels good to put this Party Time car back in the winner’s circle.” 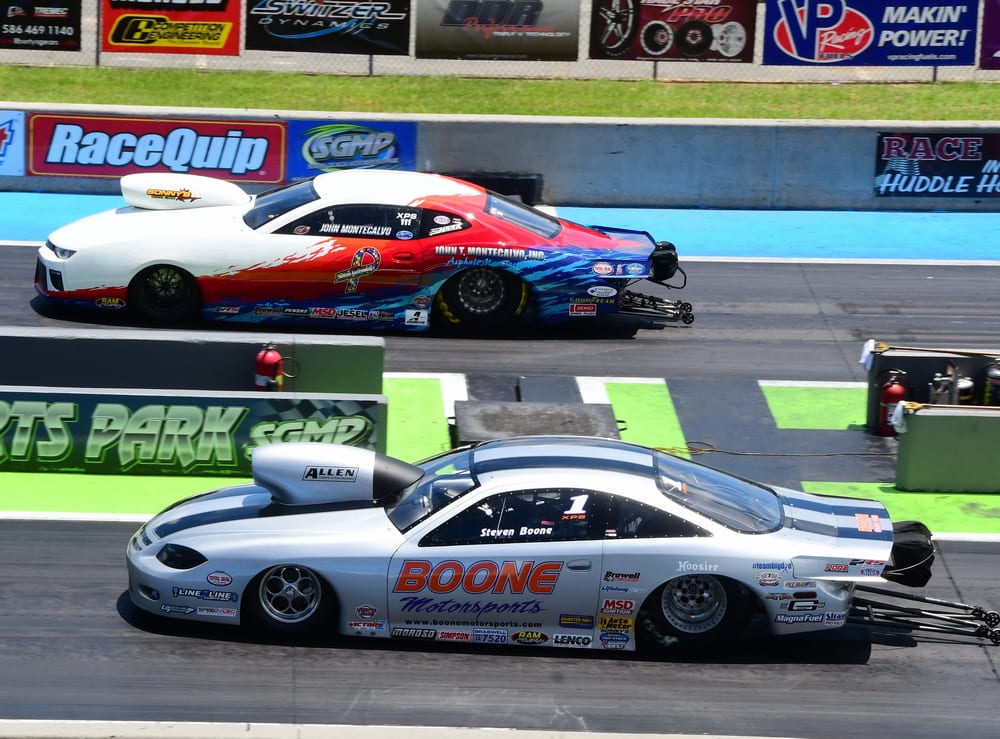 Defending world champion Steven Boone happened to race three drivers who reached too far for a starting-line advantage, as each of his opponents turned on the red light, allowing Boone to take his admittedly “wounded” Boone Motorsports ’07 Cobalt to his first win of the season. Boone recorded a 4.223 at 173.03 in the final round, while John Montecalvo let off the throttle after going red.

“We had a rabbit’s foot this weekend, I’ll be honest,” Boone said. “It was a little tricky on that (final round) pass. But I’m tickled to death. It’s been since last year since we were in a final. Like I said, luck was on our side today. This win is really going to help us in the points. We didn’t qualify for the very first race this year since we had ignition issues. We’re doing our best to defend that No. 1 because we want to wear that again next year.” 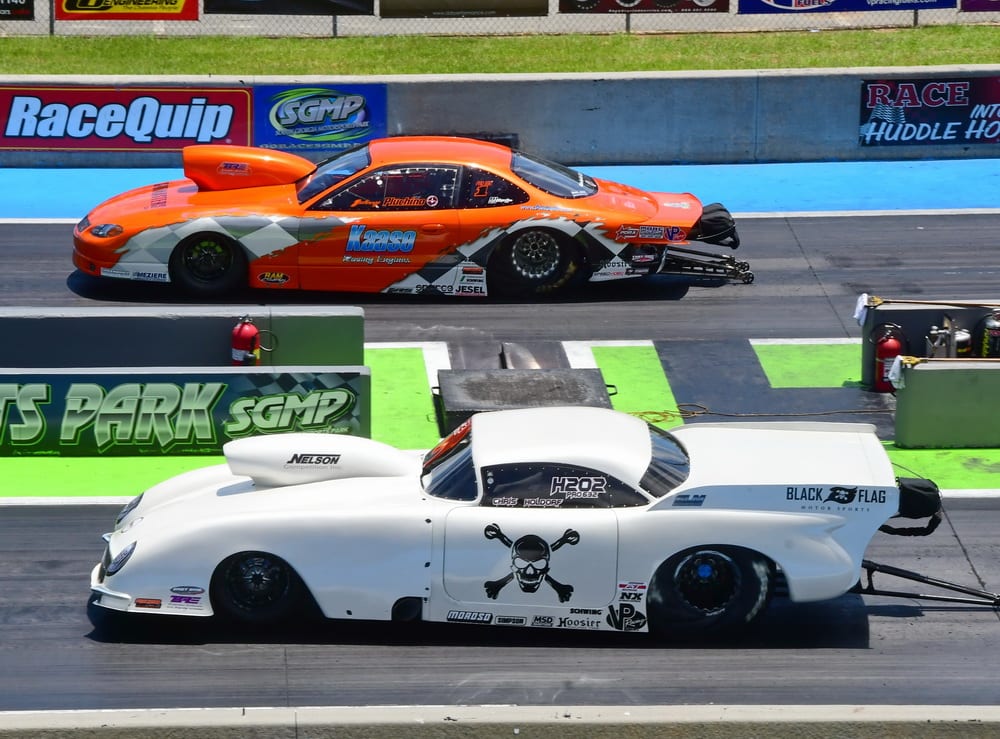 Defending world champion Johnny Pluchino was given a 50-pound weight penalty going into the Summer Nationals, which fueled the outspoken New York native to fight for his third Pro Outlaw 632 victory of the season. He was successful in his mission, using a holeshot advantage and a 4.322 at 164.27 in car owner Dominic Addeo’s Strutmasters.com ’06 Ford Escort to take down Chris Holdorf’s 4.306 at 166.68 in his nitrous-assisted ’53 Corvette in the final round.

“I don’t know if there’s any win sweeter than this one,” Pluchino said. “We weren’t the quickest car here today, but we got down a hot racetrack in bad conditions. We’re in Georgia with a naturally aspirated car and we’re fighting nitrous guys, so we were really at a disadvantage this weekend. My dad and my guys pulled through and we got a holeshot win in the final. I’m just glad to get another win for Chip Lofton and everyone at Strutmasters.com.”

Pluchino qualified No. 2 and started eliminations with a 4.313 victory over rival and 2017 world champion Dillon Voss. The second-generation driver stepped up in an incredible semifinal pairing, which saw Pluchino win by just one thousandth with a 4.285 at 166.09 over Wes Distefano’s 4.288 at 171.84. 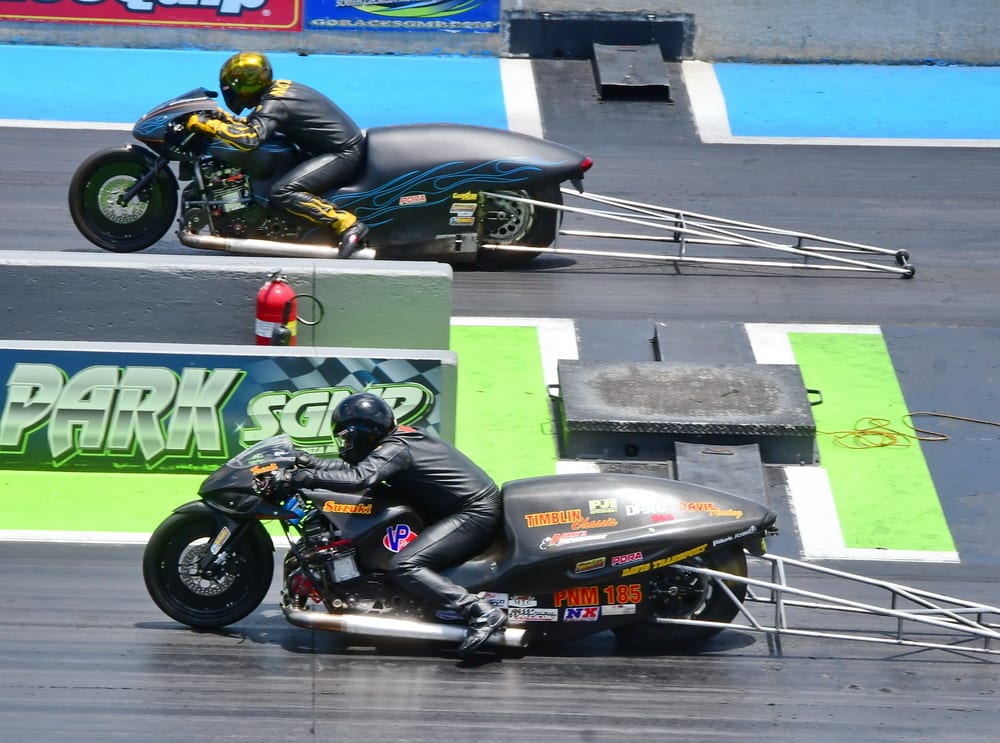 Three-time Pro Extreme Motorcycle world champion Eric McKinney didn’t receive the message that South Georgia in mid-summer is not the right time or place to record career-best, world-record-setting numbers. The Ohio rider left Valdosta with the low qualifier award, a new career-best ET (3.977), a new world record for speed (179.92) and the event win. He left on 2017 world champion Travis Davis in the final round, riding his McKinney Motorsports Hayabusa to a 4.056 at 178.33 next to Davis’ 4.279 at 142.22.

“Being back in the winner’s circle is the best feeling ever,” McKinney said. “I couldn’t have done it without my team, and especially my teammate/tuner (Ashley Owens) letting me ride his bike until we sorted out the bugs on mine. The whole weekend was awesome other than the rain. My whole team worked their tails off in between rounds because of the crazy ‘round robin’ eliminations. The competition is so tight – you’ve got to be on your game 100 percent, so to win is just awesome.” 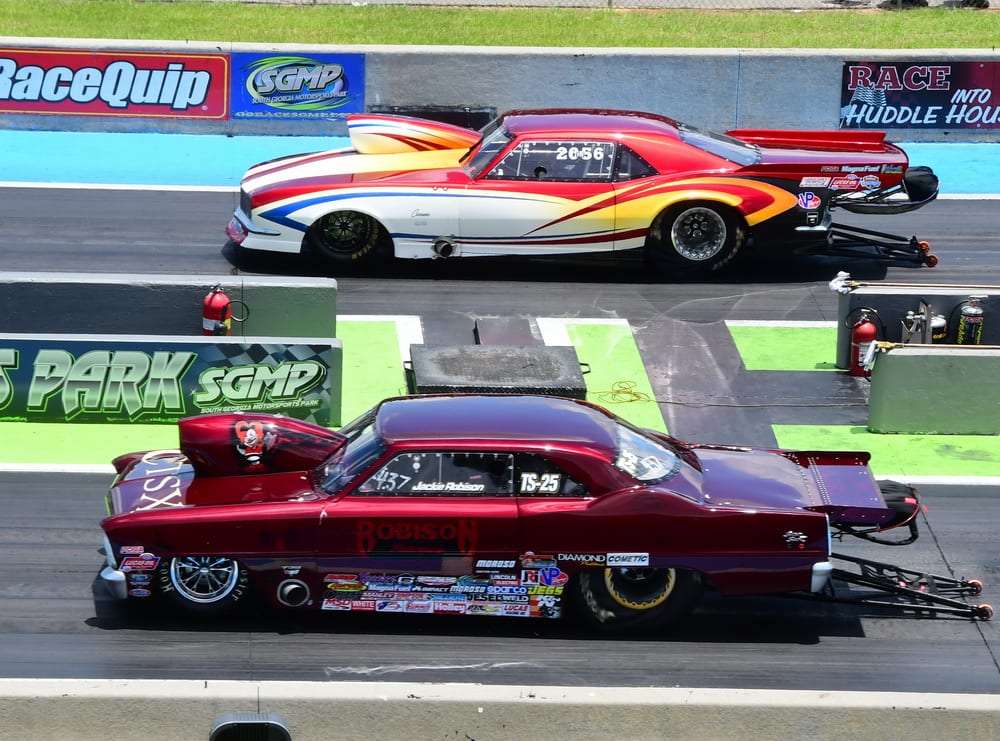 The Elite Top Sportsman final round featured Southeast hitters Jackie Robison and Bruce Duncan squaring off in a pair of classic Chevrolets. Robison left first and turned on the win light in his ’66 Nova, running 4.386 on his 4.37 dial-in. Duncan ran a 4.334 on his 4.25 dial-in in his ’68 Camaro. Robison defeated Ken Ellison, Glen Teets III and Mike Corbin before the final round, while Duncan eliminated PDRA regulars Randy Perkinson, Derrick Brown, Scott Moore. 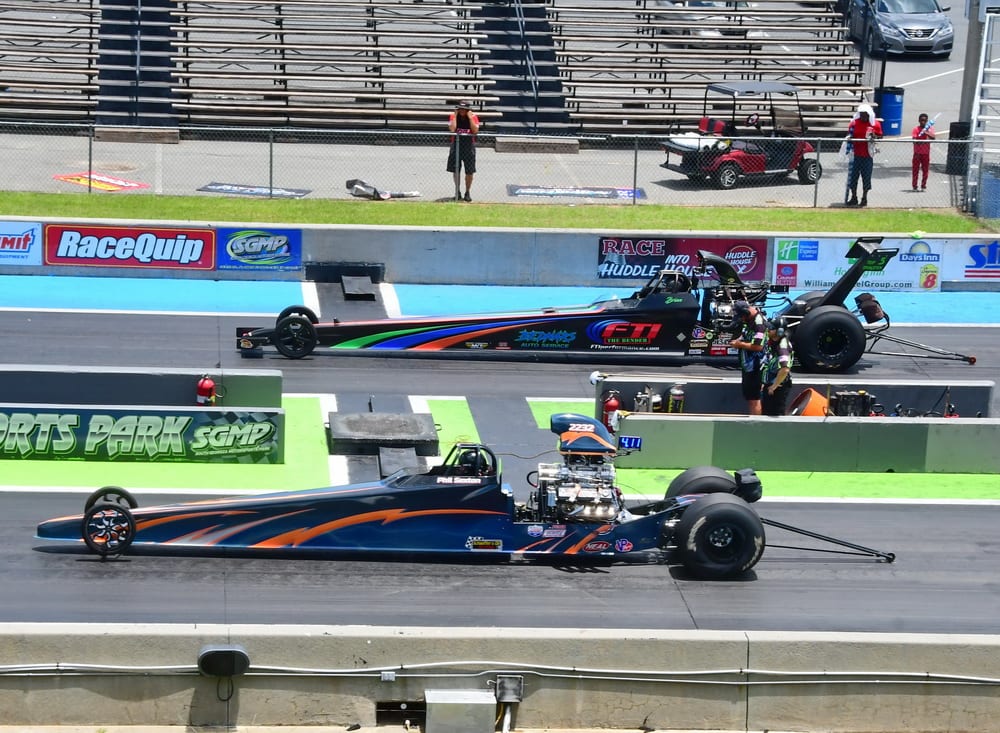 Going into the Elite Top Dragster final round, it was a given that the PDRA “660 Man” trophy would stay in the Southeast. Hampton, Georgia’s Phillip Sexton kept it in the Peach State, wheeling his ’17 M&M dragster to a 4.124 on a 4.11 dial-in alongside Ocala, Florida’s Brian Bednar. Bednar went red in his supercharged ’09 Spitzer dragster. Sexton first raced past Nick Hamilton, Angie Travis and Kellan Farmer, while Bednar’s prior round wins came over 2016 world champion Justin Kirk, Bill Earnst and Maryland winner Camrie Caruso.

Jr. Dragster graduate Kimberly Messer continued her strong rookie season in Top Dragster 32 with her second victory in her ’16 Racetech dragster. She used a 4.67 on a 4.66 dial-in in the final round to turn on the win light, while Mandy Teets-Seal broke out with a 4.509 on a 4.51 dial-in.

The 2019 PDRA Tour will continue July 18-20 at the inaugural PDRA Northern Nationals presented by Callies at Dragway 42 in West Salem, Ohio.