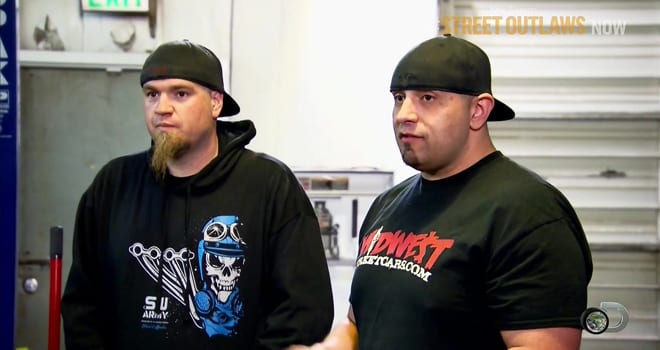 “If nothing else, it’s proof that street racing will always have consequences,” says Justin “Big Chief” Shearer, star of Discovery Channel’s highly popular and equally controversial reality show Street Outlaws, in response to a letter several cast members received from the National Hot Rod Association (NHRA) notifying them that any further participation in a show that glorifies illegal street racing – a direct violation of NHRA’s member code of conduct and overall mission – would result in the revocation of their respective competition licenses.

Shearer, finding some validation in the letter, which actually was sent to his close friend and co-star Shawn “Murder Nova” Ellington, as he isn’t personally a NHRA competition license holder or member, quickly snapped a photo and posted it to his personal Facebook profile page. The reaction from friends and fans was explosive to say the least. Comments and messages in support of the celebrity street racer quickly escalated into an all-out assault on NHRA—within 12 hours innumerable memes had circulated social media networks, along with the creation of an “NHRA Sucks” Facebook fan page (with 3,200 members at the moment).

It wasn’t necessarily the reaction Shearer was looking for, but he certainly wasn’t surprised by the outrage. 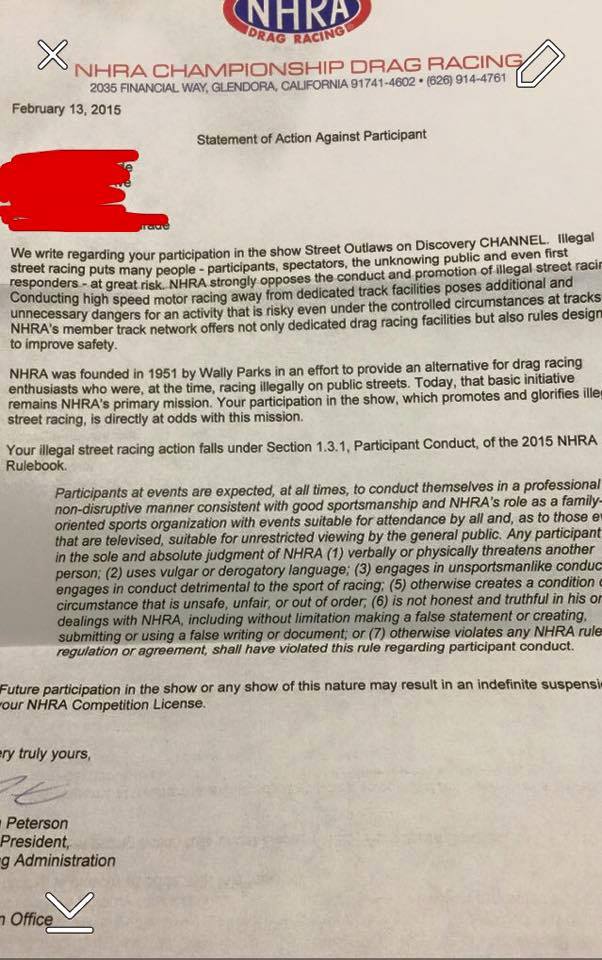 “When I posted the letter on the Internet it wasn’t a shot at the NHRA,” he explains. “I didn’t talk any smack on them; I didn’t have anything negative to say about them in my post. All I was doing was warning guys—mainly the ones begging to be on the show, trying to get on the show or have already been on the show that don’t street race and won’t street race illegally—that street racing has consequences. No matter if it’s on our show, in real life, in the middle of the night, in front of your house—it doesn’t matter—street racing will always have consequences and you have to be okay with that to do it.

“The point of my post was to let people that are trying to cross over—trying to get some publicity or because they think it’s easy—know that once you do it; you might not be able to go back.”

For Shearer, the idea that he and the show’s other cast members could be banned from NHRA competition and NHRA-sanctioned tracks is abundantly bothersome, but not reason enough to throw in the towel on a television series in the midst of filming its fifth season that has thrust him and his admittedly blue-collar friends into bona fide stardom.

Shearer shares the sentiment, but doesn’t gloss over the reality of the situation and the repercussions of moving forward in the face of NHRA’s obvious disapproval.

“Man, honestly, it’s hard for us,” the Mustang, Oklahoma, native says. “I don’t really know how to put it. I can respect what’s in the letter, and I understand what’s in the letter. I understand their position against what we’re doing. I’d say there’s probably three-million people that feel the same way NHRA does—they tell us about it all the time on the Internet—but they’re not trying to prevent us from making money or racing at certain places. NHRA is not only voicing their opinion, they’re issuing an ultimatum. I have a feeling that it’s only going to get worse, and they’re going to do things that are irreversible.

“So many of the Street Outlaws guys are trying to pay their bills and make a living by visiting NHRA tracks, selling merchandise, meeting fans and doing this whole deal because, truth be told, it’s not like the show pays that well,” Shearer continues. “Now, NHRA is going to strip us and several of these track owners the opportunity to take advantage of the buzz and excitement the show has created and pack a place full of people, tracks that have never seen six or seven-thousand people. That’s the fallout; that’s the part that people might not understand.”

The fanfare of Street Outlaws cannot be ignored. Shearer and Ellington readily admit that given adequate weather they could easily book appearances at tracks and events year round. According to Discovery Channel Senior Publicist Jackie Lamaj, Street Outlaws was January 2015’s top cable program on Monday nights amongst males 25-54, 18-49 and 18-34 (excluding sports) and is averaging 1.7 million viewers in the 25-54 age group.

“It’s not all bad, though,” Shearer quips, letting a little of his beloved “Big Chief” persona shine through. “This whole deal should weed out a little bit of the 900-million guys in the country who have never raced on the street, but now all of a sudden want to be on Street Outlaws so they can get some exposure and chase sponsors. Hopefully, this will curtail a little bit of that because it doesn’t look like they’d be welcomed back to the tracks they were racing at before. Not to mention, next week’s episode is probably going to pull insane ratings.”

In reality, it’s that kind of brash bravado and anti-establishment attitude that has turned Street Outlaws into a legitimate hit. The same way “Big Chief” and “Murder Nova” risk life, limb and state-issued license competing for the top spot on “The List,” they’ll happily sacrifice the right to race at NHRA-sanctioned facilities.

“That’s the whole reason we got the damn show,” Shearer stresses. “We’re not like everybody else when it comes to this kind of shit. We’re not some old NHRA racers that couldn’t imagine life without our NHRA licenses. We don’t care. Look at the response from our fans; they went crazy over this. Maybe we’re stupid—we probably are—but we’re not going to just fall into line because of a scary letter.”

When asked if they thought a publicly issued statement or some other course of action from NHRA could have prevented the Internet outrage, Shearer admitted he didn’t think anyone really handled the situation exactly right.

“I don’t really know what the best way to handle the deal would have been,” he says. “I feel like they could have done it a totally different way, but I didn’t have to put the f*$%&@^# letter on Facebook, either. Personally, I don’t think anyone was under the impression that NHRA was in any way endorsing what we’re doing, but I get it.” 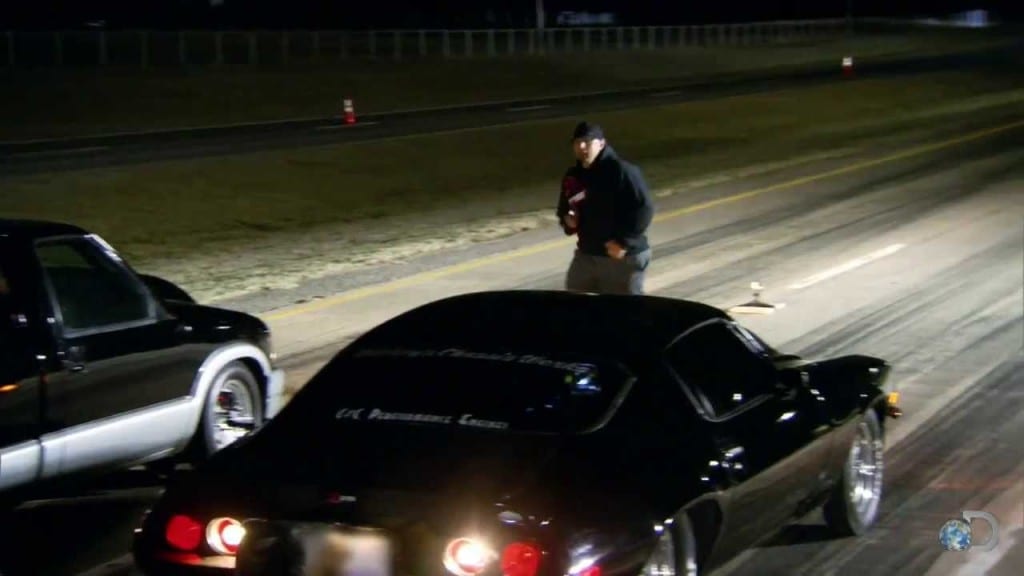 Without question the illegal street-racing premise of Street Outlaws doesn’t come remotely close to falling in line with NHRA’s stated objective of keeping racers off the street and on the track, yet Shearer isn’t convinced that what he and the show represents is the black eye on the sport of drag racing that some people believe it is.

“I don’t think what we do is a black eye per se,” he says. “Everybody is worried that we’re going to corrupt the kids watching the show or whatever. Well, my kids watch the show; I know everybody’s kids that I hang out with watch the show and those kids range from 3 to 10, 12, whatever, and they’re more into drag racing right now than ever. Before the show, they might have known dad had a race car, but now that it’s on TV and it’s a big deal, well, they want to go to the track every weekend, they’re into it, they care because they’ve got favorites and they’ve got someone they can root for.

“But NHRA doesn’t like street racing, and that’s fine,” Shearer concludes with a chuckle. “Like I said, street racing has consequences; always has, always will.”