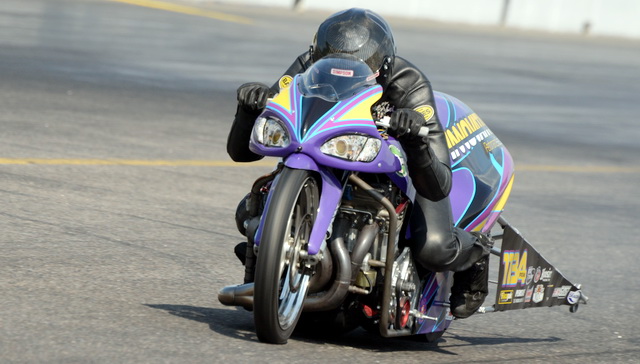 Halfway through the 2012 ADRL season, Casey Stemper and the Innovative Performance Racing Team have emerged as clear contenders for the 2012 Pro Extreme Motorcycle (PXM) championship. In five races, they have racked up three number-one qualifying awards and three final-round appearances to match.

This past weekend’s ADRL U.S. Drags V at Virginia Motorsports Park provided more opportunity for the young PXM star to shine. After qualifying number one again with a scorching 4.034 at 174.21 mph, Stemper pounded through the elimination rounds with all four runs within two hundredths elapsed time. He took out TT Jones (4.044), Billy Vose (4.046), Paul Gast (4.041) and finally Eric McKinney (4.034 at 164.77) with deadly consistency. 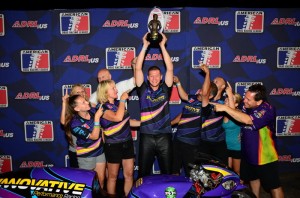 “We had a fantastic weekend to say the least,” Stemper’s mother, Karne, said. “Casey was on fire–literally! In the final round, Casey was on fire approximately 100 feet before the finish line when the head gasket blew on the bike. He was off by over 11 MPH at the finish going through the traps way off pace at 164 MPH. Even then he ran a 4.03.”

“I felt the heat on my arms, but I was not letting off that throttle being so close to the finish and knowing that Eric was charging hard with his big mile per hour,” Stemper added. “When the win light came on, it was a fantastic feeling. The effort of the entire Innovative Performance Racing Team definitely paid off. We were consistent all day, and with the heat we were racing in our numbers are that much more amazing.

“I can’t say enough about Innovative Performance Racing, with the performance of our chassis running an incredible 1.00 60 foot to our engine performance and durability. Now that the ADRL has officially documented that our engine is a stock stroke 1640 cc after a tear down at the St. Louis race, it shows how important the entire race package is, and that each component plays a huge part in getting the numbers that are required to win. We call our engine, the ‘lil engine that could’.”

The Innovative Performance Race team shows pride in being a family and “like family” team, boasting the complete package with an in house chassis and engine business. Besides manning the bike, Stemper also builds the chassis, but is also quick to give credit to the rest of his team. 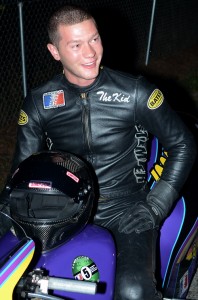 “There’s no way I could pull of a year like this without a great team. William ‘super tuner’ Cavallo is a key part of our success and we can’t thank him enough. I also give a lot of credit to thank my dad, Terry, for his exceptional tuning abilities and finesse, and of course Mom for all she does to service the bike and make sure that I am lined up correctly in the groove for a safe and smooth ride down the track. Last but not least is our good friend Derek for all of his crew help,” Stemper said.

“I am very proud to be a part of this race team. Knowing the huge support that I have from my Mom and Dad makes it that much more special to me to go out there and give it my best, because I know everyone involved is giving it their all. And of course we couldn’t do any of this without the help of many great partners including MTC Engineering, Paul Gast, Robinson Transmission’s and John and LA Montecalvo. Big thanks goes out to them for their support.

“I also want to mention the unsung heroes, the ADRL’s own ‘traction twins’ for their exceptional abilities to give us the best possible track conditions and to all of the exceptional tracks that we have the pleasure to race on.”

“Everyone is definitely stepping it up in the ADRL PXM category, and as always, we strive to go faster and faster, and to keep our motor durable and longer lasting in order to keep up with the competition. It’s nice to see our hard work paying off.”

(Photos by Ian Tocher and Roger Richards; Click to enlarge)