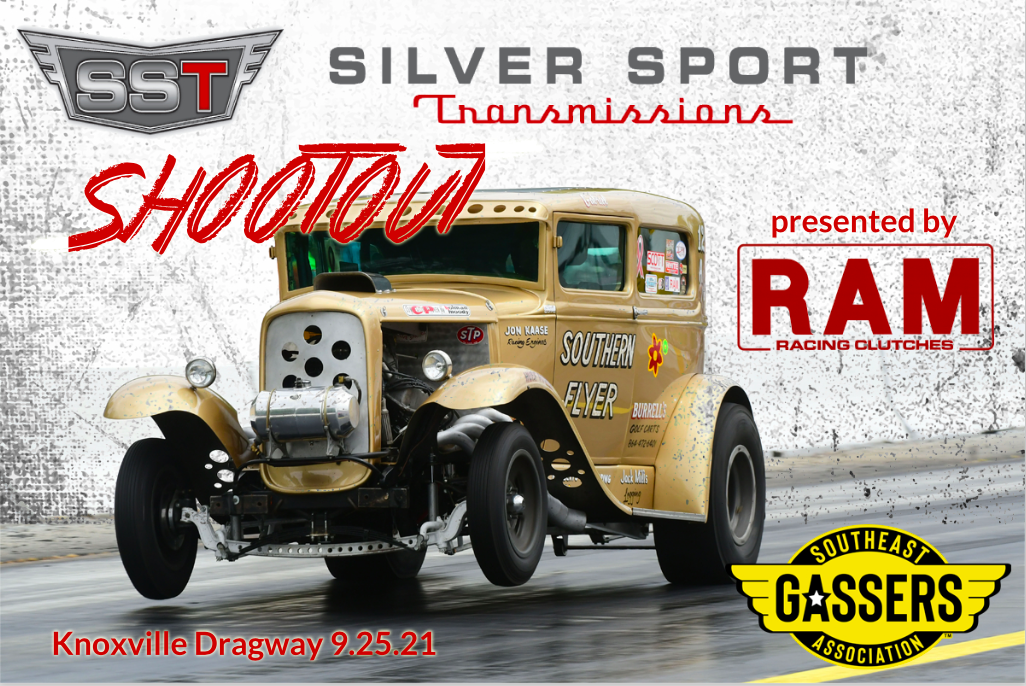 Silver Sport Transmissions, in conjunction with RAM Clutches, are proud to announce the title sponsorship of the Southeast Gassers Association’s SST Shootout presented by RAM Clutches, September 25th at Knoxville Dragstrip in Tennessee.

Silver Sport Transmissions (Rockford, TN) was founded by Jack Silver in 2014. Silver had just purchased a 5-speed PerfectFit™ Kit for his 1986 Chevrolet El Camino “Choo Choo” when he heard about the previous owner’s ‘issues’. After investigating how a company with such great products ended up declaring bankruptcy, Silver found no fault in the staff or products. He gathered some investors and brought the popular products back to market and hired back all the old employees.

SST’s in-house engineering staff designs parts with an eye on quality, safety, and cost. SST’s technical service staff offer top notch customers guidance and product support. The sales staff have sold TREMEC and A41 PerfectFit and RestoFit® kits for almost 20 years now. All of the staff at SST take pride in their work and are focused on how their work will impact the customer. TREMEC sales have increased allowing SST to go from a small TREMEC authorized reseller to one of the largest TREMEC Elite Distributors.

Silver Sport Transmissions has been a partner with RAM for several years and supplies RAM Clutches for their single and dual disc clutch systems and flywheels under the ‘Advanced Friction’ banner with their Tremec 5- and 6-speed transmission packages. SST will have a full display of their products and technical experts on hand to assist you with questions about your street and performance transmission needs.

RAM Clutches has been involved with SEGA since its founding by Quain Stott, and worked with Quain as well during all of his Pro Mod days of the 1980s into the 2000s. The majority of the racers in the SEGA are using RAM single-disc sintered iron race clutches.

RAM was founded in 1973 by John Norcia in Canton, Ohio, and moved to Columbia, SC in 1983. It is now run by sons Mike and Pat Norcia, who share a love for all manually shifted performance and racing vehicles.

“The Southeast Gassers have been big a shot in the arm to keeping stick shift drag racing alive and well, along with the many other stick shift only groups around the country,” said Mike Norcia. “We have been incredibly busy trying to keep up with the multitude of new cars being assembled for the SEGA, as well as keeping all the current customer units serviced.”

The same intense drive and passion that RAM and SEGA racers have for manually shifted transmissions and racing is shared by RAM and Silver Sport with their street performance customers!