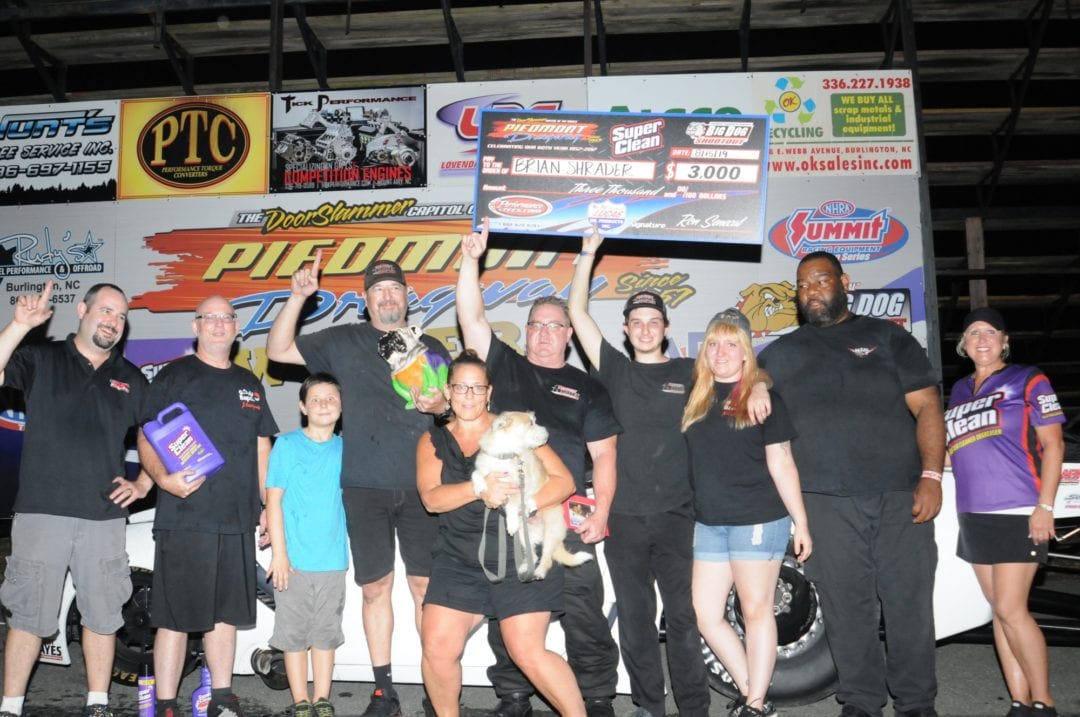 After a moving prayer from Piedmont Dragway’s general manager, Kevin Shipmon, honoring the memory of our fallen friend, Danny Dunn, the 12 cars in attendance got down to the business at hand of qualifying for the fifth race of the six-race series that is simply known as “Big Dog”. Points are becoming a factor, as third place driver Jason Harris, missed the July race due to obligations in Ohio at the PDRA event, then failed to qualify for the eight-car field this month. Other implications also moved Travis Harvey to second. 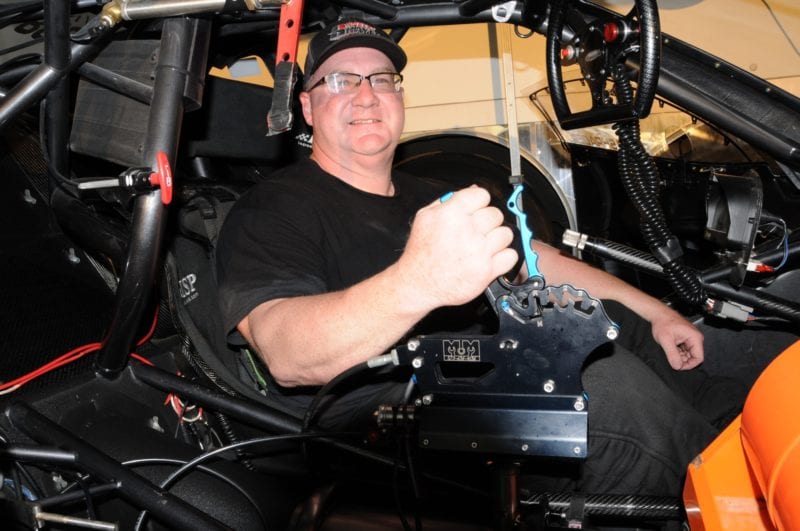 Qualifying went from a 3.989 from Shrader to a 4.098 from Dane Wood in “the Hook”. Second was Harvey at 4.014 with Danny Perry at a 4.042 in third and a 4.054 for Mr. MPH, Scott Lang. The bottom 4 included Brett Nesbitt at a 4.059, a much-improved Cam Clark at a 4.063, Tim Lawrence with a solid 4.063 and Dane Woods’ 4.098. Missing the field were Justin Wall, Jason Harris and Tommy Payne, with Tommy Ellison not making a hit. This explains all the excitement surrounding the class with new, purpose-built cars on the horizon for Andy Beal and Chris Rini. Drag Illustrated’s own Josh Hachat recently described a growing class that improves every time the gate opens for these Big Dog/Top Sportsman cars.

Eliminations were started after the drawing for pairings. The opening round resulted in winners Clark at 4.04, Nesbitt at 4.06, Lawrence at a 4.07 and Shrader’s bracket-like 3.984. The semis had Clark running a 4.03 with a .017 light over Lawrence’s 4.07. The other pair featured another 3.994 from Shrader over a 4.07 from Nesbitt. This set the stage for the finals with Clark’s first final since he won two events in one day last year. Both drivers left together with Shrader using a .037 light at 3.994 to defeat Clark’s .022 light and 4.07.

In the other eliminations for the night, Randall Cantrall defeated Robert Richardson in Outlaw DoorSlammer presented by OReilly Auto Parts. Points leader Charles Wright defeated Shannon Joseph in 6.00 and Rico’s Reel Street 7.49 was won by Ken Myrick over Emanual Cohn.

If you missed the August edition of “the Big Dog Shootout”, be sure and plan to attend the final event in September as the points will be decided. Possibly another Wally will be awarded and the excitement will be off the chart. See you then at “the DoorSlammer Capital of the World”, Piedmont Dragway.