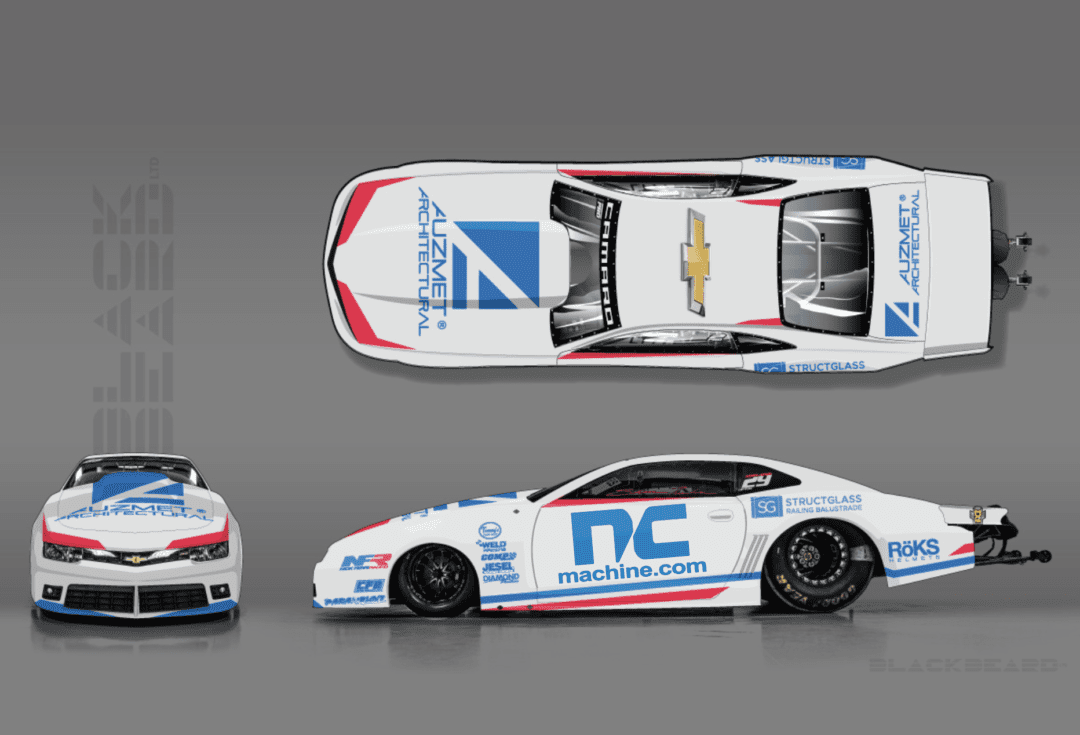 After a three race hiatus NHRA Pro Stock racer Shane Tucker is ready to get back on track this weekend at the Lucas Oil NHRA Nationals at Brainerd International Raceway. The young Australian businessman who operates Auzmet Architectural from Dallas, Texas, is bringing a new corporate partner with his Chevrolet Camaro Pro Stock to the famed race track just south of the Canadian border. Joining Auzmet and StructGlass on Tucker’s 200 mph Camaro will be NCMachine.com, a Winnipeg Manitoba based full service machine shop.

“We know that a sizeable group of the fans attending the Lucas Oil Nationals will be from Canada and we saw this as an opportunity to get our name out there,” said Dan Roche, owner and founder of NC Machine and Tool Company. “We have a personal relationship with Shane’s team and we know he is a great competitor. After meeting Shane at the Gatornationals we knew we needed to put something together for the Brainerd NHRA national event.”

Since 1977, family-owned NC Machine & Tool Company has been serving customers worldwide with precise workmanship, quick turnaround times and unsurpassed customer service. The company was started by Roche in a small shop but has grown with the help of Roche’s son Chris, to now comprise a 19,000 square-foot building. The facility houses state-of-the-art machines and equipment including milling machines, grinders, CNC and manual lathes and more. NC Machine & Tool’s commitment to their customers also extends to their neighbors throughout Manitoba as they are major sponsor of Manitoba’s Breast Cancer Pledge Ride, as well as various high schools, community college and apprenticeship programs.

While the additional sponsor is an exciting development for the young Australian racer, Tucker knows that his chances of qualifying for the NHRA Countdown would take a Herculean effort over the last two races of the regular season. He still feels like he can play an important role in his competitor’s championship pursuits

“It is always exciting to have a new partner onboard,” said Tucker. “We go into every race wanting to perform at the highest level and with a new sponsor that makes it even more important. Brainerd can be a wild race where anything can happen. Our goal is to put on a good show for the fans in the grandstands and watching on Fox. Having a company like NC Machine and Tool get on this Chevrolet Camaro and support us is a big deal.”

Tucker is currently 16th in the Mello Yello point standings and it trailing the 10th spot by 145 points. There will be 20 points per round available in Brainerd, plus qualifying points and the final race of the regular season will be the prestigious Chevrolet Performance Parts U.S. Nationals where points and a half will be awarded making each round of eliminations worth 30 points

“We are not giving up on our dream of an NHRA Pro Stock world championship,” said Tucker. “It may not happen this season but we made a lot of changes to the race car and then I needed to take care of some business obligations. That is who life works sometimes. My team has been great and I have to thank business partners like Dan Roche for supporting me as well as everyone at Auzmet Architectural and StructGlass. Brainerd will be a great event for us and we will be giving it our all.”