SFG Promotions has worked tirelessly over the past five years to create events that have changed the face of bracket racing for the better. As car counts continue to grow and the competition at SFG events tightens each year, the feat of winning an SFG event has become one of the most prestigious across the bracket racing industry.

In a world where races are won by thousandths of a second, achieving victory at an SFG event certainly deserves an equally impressive award. For years SFG has done this by giving racers life changing payouts for a fraction of the entry fees that had become the industry standard. While those massive payouts will remain intact, SFG has often sought after something more tangible to give its event winners in addition to the big checks common to the sport.

With the help of Tom Patsis, founder of Cold Hard Art, SFG has found what it’s been looking for.

Starting this weekend at Bradenton Motorsports Park, SFG race winners will win big money and an all-new series trophy to honor their achievement. The trophy is dubbed the “Riley” as a tribute to Kyle Riley, SFG’s Founder and CEO, who’s led the charge for all that SFG has accomplished to better this sport of bracket racing. 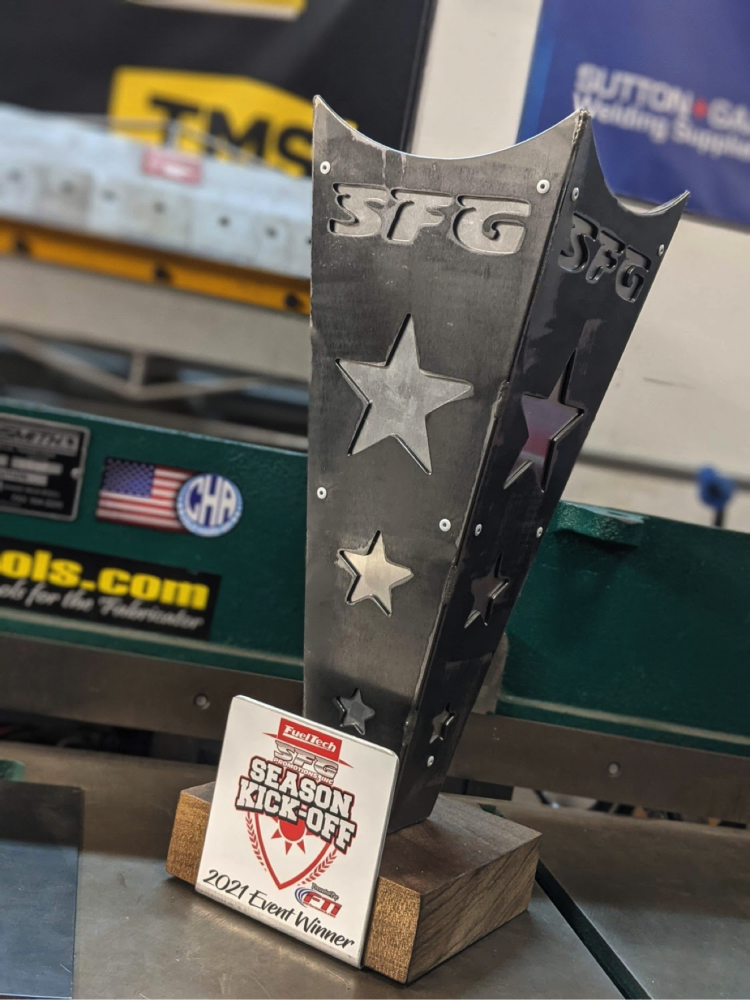 The Riley trophies are hand-crafted by Patsis, featuring laser-cut steel that’s been tig welded together to perfection. Riley trophies come in at 17 inches in height and weigh an impressive 15 pounds.

“When we looked at the impact that winning an SFG event has on the careers of racers in this sport, it was only fitting that we build a tradition in our series to further enhance the milestone of a win with SFG,” says Austin Truhler, Business Director for SFG. “It is our hope that the Riley trophy with become a coveted piece of drag racing hardware and that racers from around the world will come to our events to compete for huge payouts and their very own Riley trophy.”

Tune into SFG’s Facebook and YouTube pages this weekend to watch some of the best bracket racers in the country compete for over $125,000 and the first pair of Riley trophies during the sold out FuelTech-SFG Season Kickoff presented by FTI Performance at Bradenton Motorsports Park.