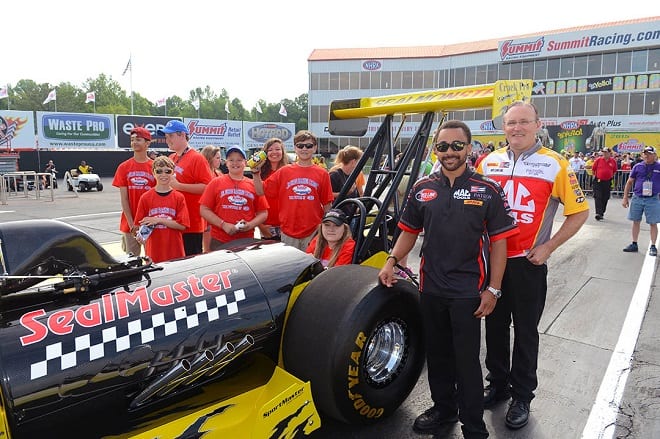 SealMaster, a valued Kalitta Motorsports partner since 2014, will expand its role to the primary level on J.R. Todd’s Top Fuel Dragster at upcoming events in Norwalk and Denver. This is SealMaster’s first primary sponsorship at the pro level of NHRA Mello Yello Drag Racing Series.

Based less than an hour from Summit Motorsports Park in Sandusky, Ohio, the franchisor distributes SealMaster pavement maintenance products and equipment through franchises coast to coast. The company’s products and equipment are sold in every state where the NHRA Mello Yello Series races, and SealMaster franchisees and customers have enjoyed Kalitta Motorsports’ hospitality and winning tradition for two seasons.

SealMaster’s relationship with Kalitta Motorsports and the NHRA has flourished over two seasons,” said Debbie Hufford, spokesperson for SealMaster. “We’re excited to expand this program to the primary level of J.R. Todd’s Top Fuel Dragster to further spread the word to NHRA fans about SealMaster’s top-quality pavement maintenance products and equipment. We want to let international fans know, too, that we have a global distribution system and our products are available worldwide.”

The black scheme makes its debut at the home race for the SealMaster brand, before taking on the altitude in Denver, where Todd walked away with the victory last season. The Mile-High Nationals have been a great place for Todd throughout his NHRA career. He earned his first career victory in Denver in 2006, which was part of his historic run to the AAA Road to the Future trophy.

SealMaster has chosen two great races, and I’m excited to represent all the outstanding SealMaster franchisees,” said Todd, who earned his 100th career round win this past weekend in Bristol. “SealMaster really takes their NHRA partnership seriously, and I am honored to be able to educate the awesome NHRA fans about pavement maintenance. SealMaster is the best at what they do, and we are confident we can take the SealMaster tradition and be the best in Norwalk and Denver.”

Fans will have the opportunity to meet J.R. Todd as he walks with the fans prior to the race action during the SealMaster Track Walk. SealMaster, a NHRA partner, backs the track walk at all 24 NHRA pro events. Fans can also meet Todd, along with teammate Doug Kalitta, at the SealMaster display in Norwalk, as the SealMonster display dragster makes its return to NHRA Nitro Alley.

“It is always great when a sponsor continuously wants to grow their program,” said Jim Oberhofer, vice president of operations, Kalitta Motorsports. “SealMaster has been such a solid part of the Kalitta Motorsports family and we could not be more excited that they have decided to grow to the primary level.”