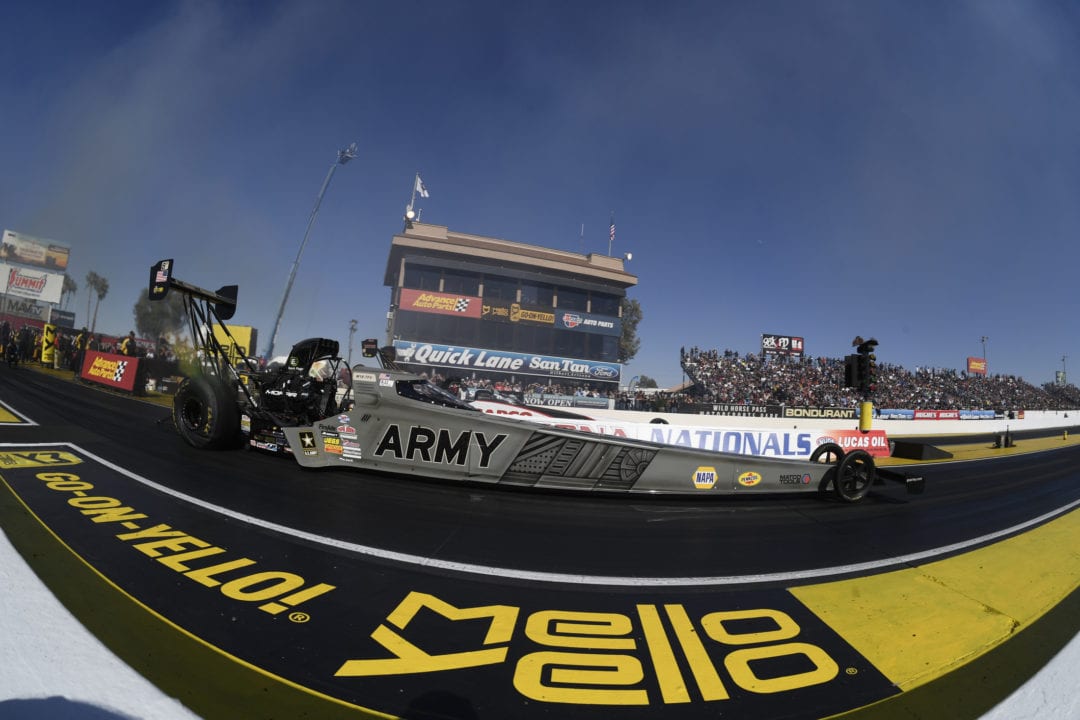 Tony Schumacher (Top Fuel) and Deric Kramer (Pro Stock) are also No. 1 qualifiers in their respective categories at the second of 24 events on the 2018 NHRA Mello Yello Drag Racing Series schedule.

Force took over the top spot in the category with a record run of 3.826 seconds at 335.98 mph in her Advance Auto Parts Chevrolet Camaro during her second pass of the day. After recording seven No. 1 qualifiers in 2017, she is aiming for her first event victory since Houston 2016.

“That last pass today was pretty incredible, we have run well here in the past and I’m excited to be back in that top spot,” Force said. “We are hoping to turn this consistency into a win, we just have to keep being consistent on race day.”

Force is set to face off against Del Worsham in round one of eliminations on Sunday. Ron Capps sits second after a 3.844 at 330.80 in his Napa Auto Parts Dodge Charger R/T during the final pass of qualifying on Saturday. The defending Funny Car champion Robert Hight qualified 11th after a 3.927 at 329.26.

Schumacher led the category with a run of 3.649 at 334.65 in his U.S. Army dragster posted during the first qualifying session on Friday. Schumacher also set the Top Fuel national speed record at 336.57 with a time of 3.667 seconds during his second pass on Friday. After securing four No. 1 qualifiers in the 2017 season, Schumacher locked in his first of the year in day two of qualifying.

“We earned our three points and kept the top spot so it’s been a great weekend for us so far,” Schumacher said. “The car continues to be great and [crew chief] Mike Neff is comfortable and knows what the car is doing, so I think tomorrow is going to be great day.”

He will go head-to-head against Greg Carrillo in round one of eliminations on Sunday. Steve Torrence qualified second after a 3.665 at 331.45 in his Capco Contractors dragster, while the defending world champion Brittany Force qualified in the 14th spot.

In Pro Stock, Kramer took over the top spot after driving to a 6.522 at 210.80 run in his American Ethanol Chevrolet Camaro during the fourth qualifying session of the weekend. He secured the first No. 1 qualifying position of his career as Kramer also chases his first-ever victory in the class. 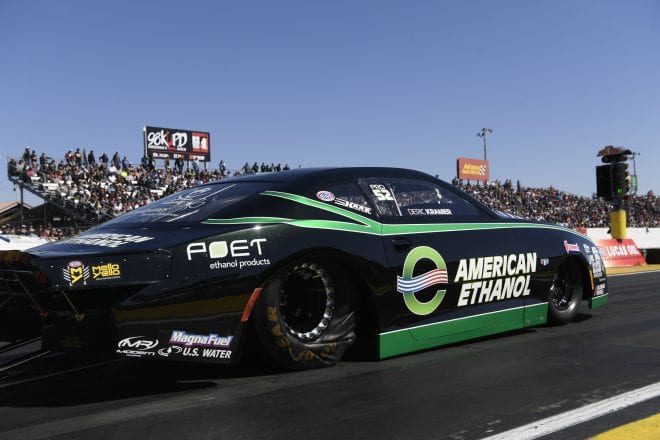 “It feels great to get that first No. 1 qualifier, and we had a great package put together this weekend and that was able to move us to the top,” Kramer said. “There were definitely some tuning adjustments from Pomona, but we went back to our old game plan with that KB power and it was a great combination.”

Kramer matches up against Alan Prusiensky in the first round of eliminations. Erica Enders is second in the qualifying order after a 6.527 at 209.98, while Alex Laughlin sits in the third spot.