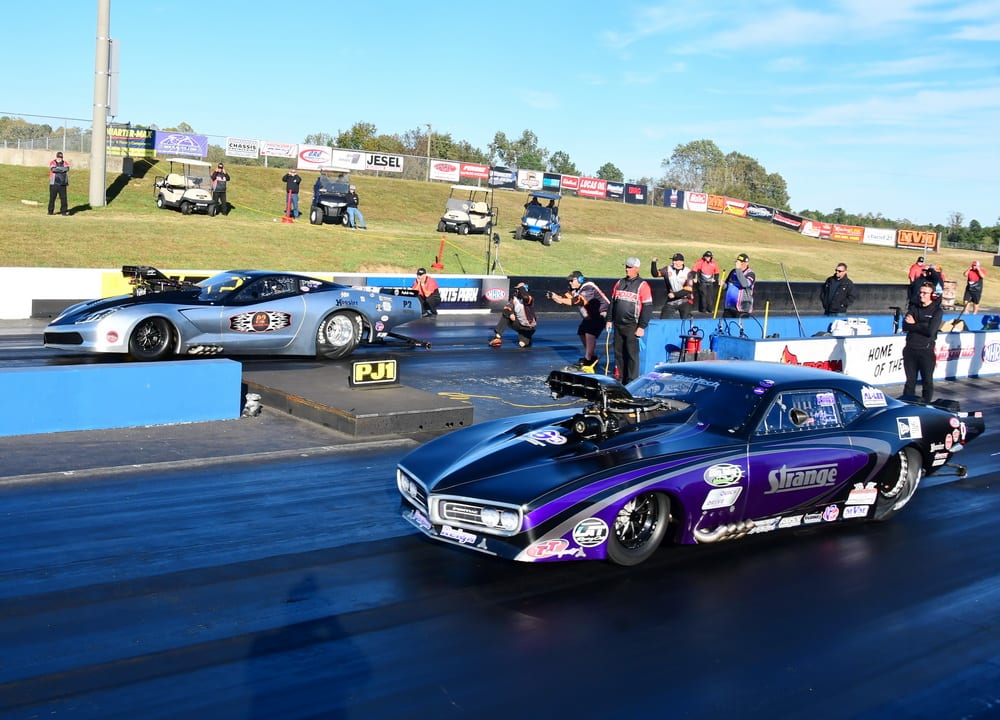 In Coolshirt Pro Jr. Dragster, Casey Wagner took his ’12 Half Scale dragster to the winner’s circle with a 7.936 next to outgoing world champion Amber Franklin’s 7.969, both on a 7.90 dial-in. The top two qualifiers in Gilbert Motorsports Top Jr. Dragster battled it out in the final round, with Connor Shields using a holeshot advantage and 7.968 pass to defeat Connor McGee’s 7.956. 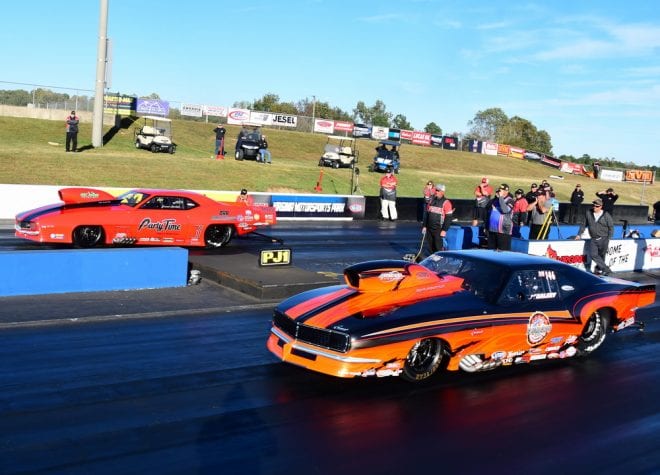 After securing the 2018 Pro Nitrous world championship with his first-round win on Sunday, Jason Harris went into Monday’s continuation of eliminations with the weight off his shoulders. Still, the Boone-Harris Racing driver was hungry for a third and final victory on the season. He slipped past the second and third rounds unopposed, but had to earn a major victory over Jim Halsey in the final round. Halsey, who reset the ET world record with a 3.646 in the semifinals, slowed to a 5.519 at 86.71 next to Harris’s career-best 3.689 at 202.15 in the “Party Time” ’69 Camaro.

“I put myself in (Halsey’s) shoes,” Harris said of his strategy for the final round. “If I’d just run a 3.64, I’d either leave it alone or calm it down a little bit. I knew I’d have to be on my A-game and I knew I’d have to be fast. I definitely knew I couldn’t go 3.65 or anything like that, but I felt like I could run a .67 pretty easily. I gave it what I thought the track would hold. I won all year long just being consistent and being the one that could go down the track. I didn’t want to throw the kitchen sink at it, but I didn’t want to give it away either. I just found a place in the middle and stuck with it.”

Harris, who won the first PDRA Pro Nitrous world championship in 2014, qualified No. 9 and won first round on a holeshot before two consecutive singles when Danny Sauro didn’t make the second-round call and Todd Fontana broke before staging. Halsey in his Fulton-powered ’68 Camaro fired off a 3.659 at 206.04 over Randy Weatherford, a 3.68 at 205.35 over Tommy Franklin, and the record 3.646 at 205.69 over Jay Cox in the semifinals. The Pro Nitrous speed record was reset in the second round by Lizzy Musi and her 209.23 mph blast.

Following a career-best 3.70 in the Pro Boost final round at the Fall Nationals, Melanie Salemi jokingly asked her husband and tuner, Jon, for a 3.6-second time slip. He delivered in spades, tuning Melanie and the “Purple Reign” ’68 Firebird to a string of 3.6s at the World Finals. Most notably, Salemi fired off a 3.624 at 206.20 to reset the Pro Boost ET world record in the second round, then a 3.662 at 204.66 in a decisive final-round victory over first-time finalist Kurt Steding and his 3.886 at 196.16.

“It’s really awesome to finish off the year like this,” Salemi said. “I just want to thank Jon, (brother-in-law) Jim, (stepson) Evan, the guys at the shop, (engine builder) Mike Stawicki, and everybody who has a hand in this. This win came with really good timing and it’s awesome for all of us to capture the win and the record right before winter. We have one more race in Florida, then we’re going to get super-serious on the dyno and work on our program for next year.”

The storyline of the World Finals in Extreme Pro Stock was the possibility of the first 3-second run by a mountain motor Pro Stock car. While no one hit that mark, a few drivers came close, including event winner Chris Powers in his Liberty’s Gears ’14 Camaro. He was a part of the quickest side-by-side race in class history – identical 4.012s by Powers and Jeff Dobbins in the second round – on his way to the final round. Opponent Elijah Morton went red, but Powers was ready with a 4.032 at 178.71 to get the win.

“It’s definitely a great feeling to get things working right again after a tough year,” Powers said. “We put together a couple good runs and ran a 4.01, then just decided to keep the car somewhat tamed to try to get the win instead of going after that 3.9 run. We definitely have a car that can do it, but it’ll take good air and a good track to accomplish it. We’re just really happy to finish the year with a win; it gives us high hopes for next year.”

Powers was consistent through eliminations, recording a 4.018 over JR Carr, then a .004 holeshot advantage to move past low qualifier and ET record holder Jeff Dobbins in the 4.012 match. Another slight holeshot helped him defeat 2018 world champion Steven Boone in a 4.039-to-4.038 semifinal race. Morton ran 4.054 to beat rookie Dillon Voss before taking two single passes to the final round.

Pro Extreme Motorcycle veteran Paul Gast made the most of his second PDRA appearance of the season, as he defeated a string of the class’s toughest riders en route to a final-round win over first-time finalist Ricardo Knights. Gast left the starting line second, but quickly made up the difference and posted a 4.011 at 170.43 on his Fast By Gast entry next to Ricardo’s 4.109 at 169.83.

“I was fortunate to have a really good bike this weekend, and I felt like I rode well and raced well,” Gast said. “Everything lined up. My crew did a great job. We had a couple silly gremlins bite us on the first two qualifiers, then we just detuned everything to make a clean run on the final qualifier. We stepped on it from there. The bike was flawless in eliminations – didn’t even have to do anything to it. Now we just might have to come out to more of these PDRA races next year.”

Gast previously raced past outgoing world champion Travis Davis with a 4.009, No. 2 qualifier Terry Schweigert with a 3.979, and championship runner-up Brunson Grothus with a 3.994. Knights had a first-round bye, then defeated Rickey Gadson and 2018 world champion Ronnie “Pro Mod” Smith.

The Pro Outlaw 632 racers decided to split the purse after Sunday eliminations were postponed to Monday. Johnny Pluchino secured the 2018 world championship in the first round Sunday afternoon when he backed up his world-record 4.163 with a 4.204.

Just 16 thousandths of a second separated Outlaw 10.5 finalists Ken Quartuccio Jr. and Tim Essick when they crossed the eighth-mile mark. Quartuccio’s Jamie Miller-tuned, turbocharged ’17 Corvette reached the finish line first with a 3.902 at 203.43, while Essick’s ProCharger-boosted ’18 Mustang followed with a 3.932 at 187.99. Quartuccio also won at Virginia Motorsports Park this summer when he debuted the car at the PDRA Firecracker Nationals. 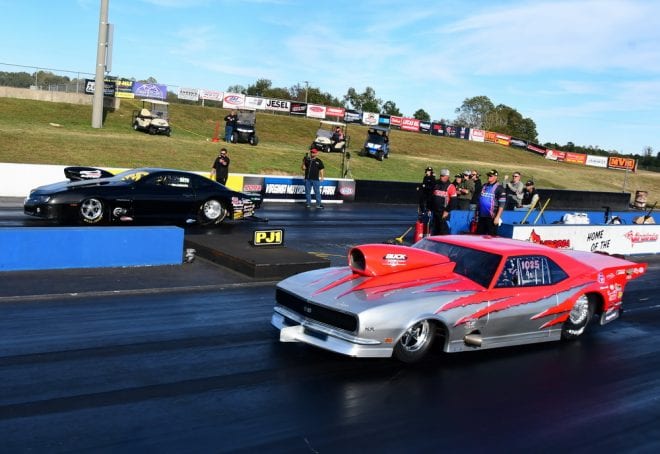 In one of the best sportsman races of the event, season opener winner John Prime finished off a strong weekend performance with a book-ending victory over Tim Lawrence in the final round. Prime drove his Buck-powered ’68 Camaro to a 4.065 on a 4.06 dial-in, while Lawrence’s Albert-motored ’13 Camaro broke out with a 4.037 on a 4.04 dial. To reach the final round, Prime took down Henry Underwood, No. 1 qualifier and ET record holder John Benoit and Randy Perkinson. 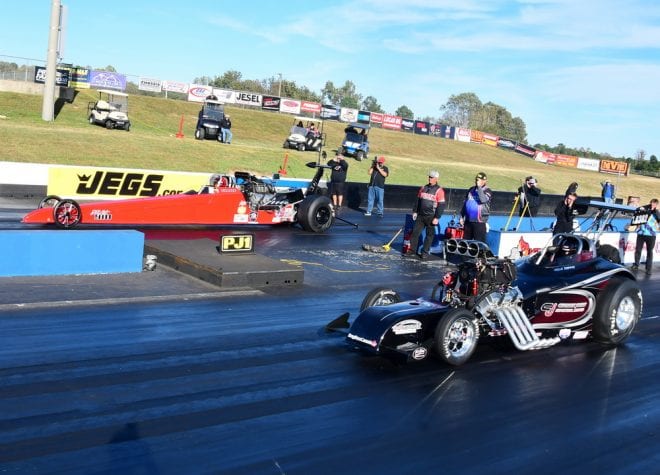 Chaz Silance had already locked up the 2018 Elite Top Dragster world championship when he rolled through the water box for his final-round match with Canadian Kyle Harris, but the North Carolina hog farmer wanted to cap off his season with a win. Silance did just that, running 3.811 on a 3.81 dial-in in his supercharged Worthy dragster to Harris’s 3.774 on a 3.77 dial-in in his blown ’32 Bantam altered. Silance previously defeated Jeremy Creasman, Junior Houston and Tim Antinora on his way to his third victory on the season.

The Top Dragster 32 final came down to David Batchelor and newly crowned world champion Tom Martino, with Batchelor grabbing a slight starting line advantage and running 4.381 on a 4.37 dial-in to defeat Martino’s 4.123 on a 4.11 dial-in.

The 2019 PDRA season will kick off April 5-6 at GALOT Motorsports Park in Benson, North Carolina.