Brothers Matt and Zach Sackman will kick off their fourth consecutive season with primary sponsorship from Hangsterfer’s Laboratories this weekend by competing in Top Alcohol Dragster and Top Dragster at the 51st annual NHRA Gatornationals, March 12-15 at Gainesville Raceway. 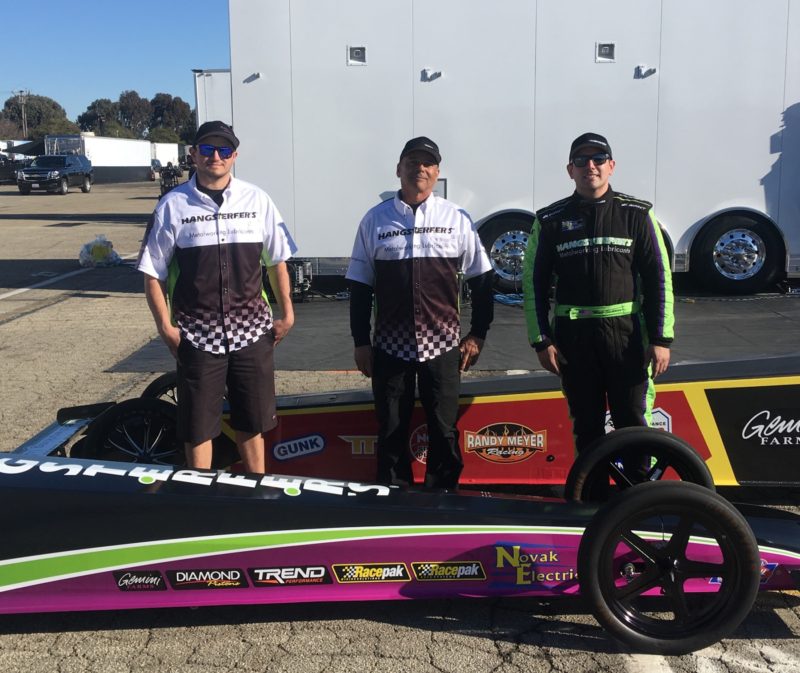 “I’m excited to race in Gainesville. The track surface is great and we’re at sea level so it’s exciting to know we’ll be able to run fast here,” Matt said. “I’m just excited to be able to race a national event, let alone in an awesome car out of the Randy Meyer camp with backing from Hangsterfer’s. I’ll be driving the car Rachel Meyer drove to victory at the Belle Rose divisional a couple weeks ago, so I feel like we have a good shot to win. Last year in Pomona I went 5.18 at 276 mph. It would be cool to run numbers like that again. Randy has the cars running good and that gives me confidence as a driver.”

While Matt usually only gets to race at NHRA divisional events on his weekends off from the NHRA Mello Yello Series tour, he and the Hangsterfer’s Laboratories executives decided to take advantage of an opportunity to enter Top Alcohol Dragster at the Gatornationals. It’s all part of the company’s goal to get Matt into Top Fuel.

“We’re getting Matt in Randy Meyer’s car as much as possible this year to get him the repetitions and the experience he needs so he’ll be ready when the time comes to get in a Top Fuel ride, hopefully as soon as next year,” said Mike Ditzel, national sales manager, Hangsterfer’s Laboratories. “We’re investing in him, we see his capabilities and we like to support the sport and see it grow.”

Zach, 24, will field the Sackman Boyz Racing Top Dragster at Gainesville. The fabricator is starting his sixth season in the class.

“I’m just trying to start the season with a win,” Zach said. “Personally, I’m trying to drive well and whatever happens, happens. I just want to do my best and try to win – and have fun doing it. My main goal this season is to contend for a national championship, and a win at the Gatornationals would be a great start.”

Hangsterfer’s Laboratories, a New Jersey-based company specializing in the research, development and manufacturing of metalworking lubricants, first signed on as the primary sponsor of the Sackman Boyz Racing Top Dragster in 2017. Since then, the company has helped the former Jr. Dragster standouts accomplish several goals. Zach secured his first national event win. Matt earned two divisional event victories in Top Alcohol Dragster, and most recently, earned his NHRA Top Fuel license in 2019.

“We’ve pretty much joined the Hangterfer’s family and the Jones family,” Matt said. “It’s an honor to be able to represent their company and be partnered with them. We’re very thankful for their support. They’re a first-class company and they treat us like family. We’re excited to run their logo on the side of our car, and hopefully we have a good year for them.”

“It’s reassuring to have the continued support of Hangsterfer’s,” Zach added. “Mike Ditzel, Bill Jones and the Jones family and everyone at Hangsterfer’s are great people and they do a lot for us. We couldn’t do this without them.”

“It’s rewarding to see the progress they’ve made since we got involved,” Ditzel said. “Matt has progressed and moved up the ranks as he chases the dream of racing Top Fuel, and it’s become our dream too. Zach and the boys’ parents, Darren and Marie, have done a fantastic job representing us in Top Dragster as well. We’re proud to continue our support of the Sackman family’s team this season.”