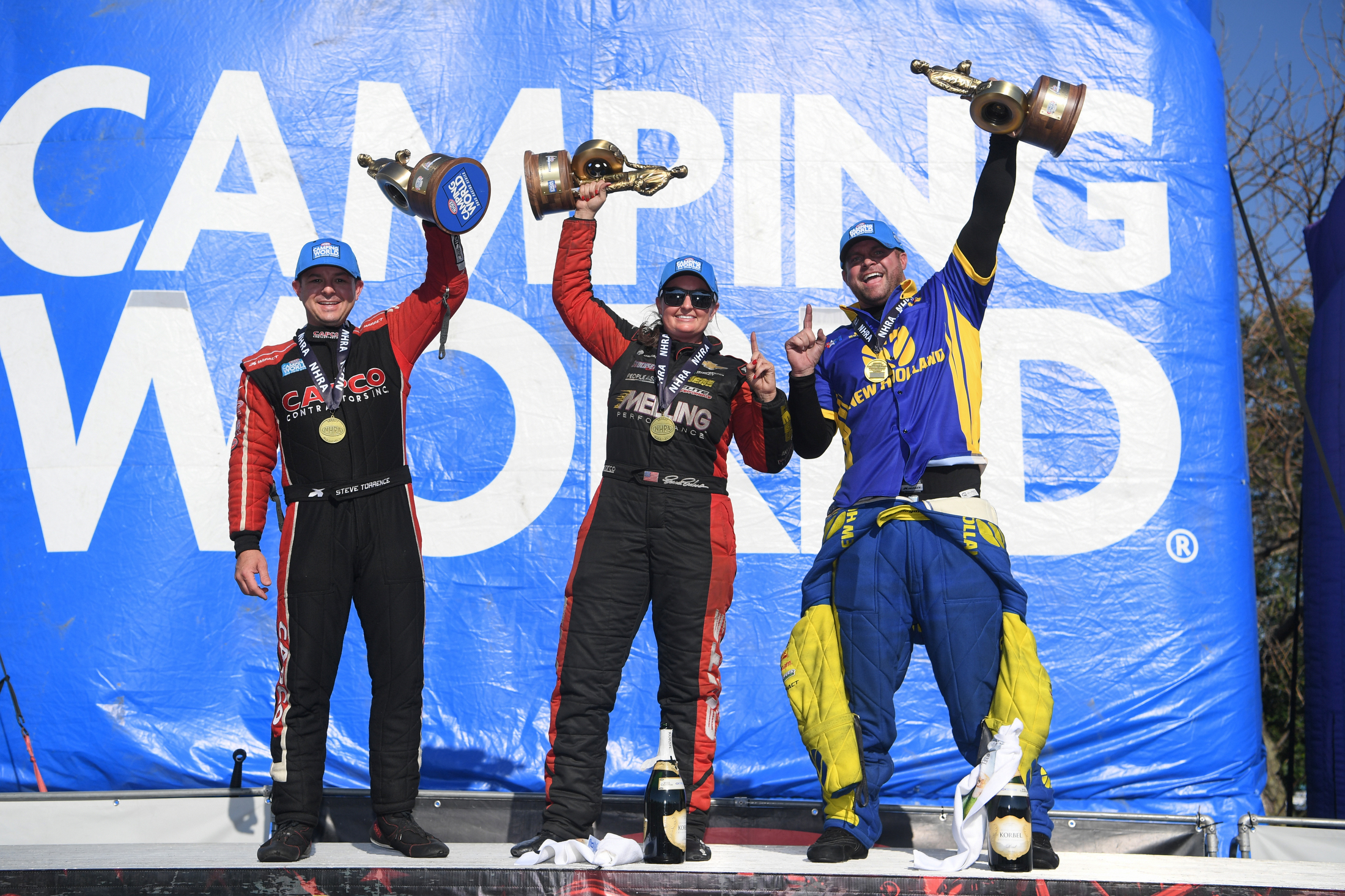 It was a day for defending world champions in the NHRA Camping World Drag Racing Series on Sunday at World Wide Technology Raceway, as Steve Torrence, Matt Hagan and Erica Enders all raced to playoff victories at the NHRA Midwest Nationals.

It was the 16th of 20 races during the 2021 NHRA Camping World Drag Racing Series season and the third of seven events in the Countdown to the Championship playoffs.

Torrence, the three-time Top Fuel defending champ, powered back into the points lead in the class, going 3.736-seconds at 328.78 mph in the final round in his 11,000-horsepower Capco Contractors dragster to defeat Mike Salinas. After a dominant regular season, Torrence went winless in the first two playoff races as Brittany Force jumped into the points lead. But that changed on Sunday, as Torrence beat Shawn Langdon, Antron Brown and Josh Hart, who won last weekend, to advance to the final round. With Salinas slowing in the final round, Torrence drove to his ninth win in 2021 and 49th in his career. 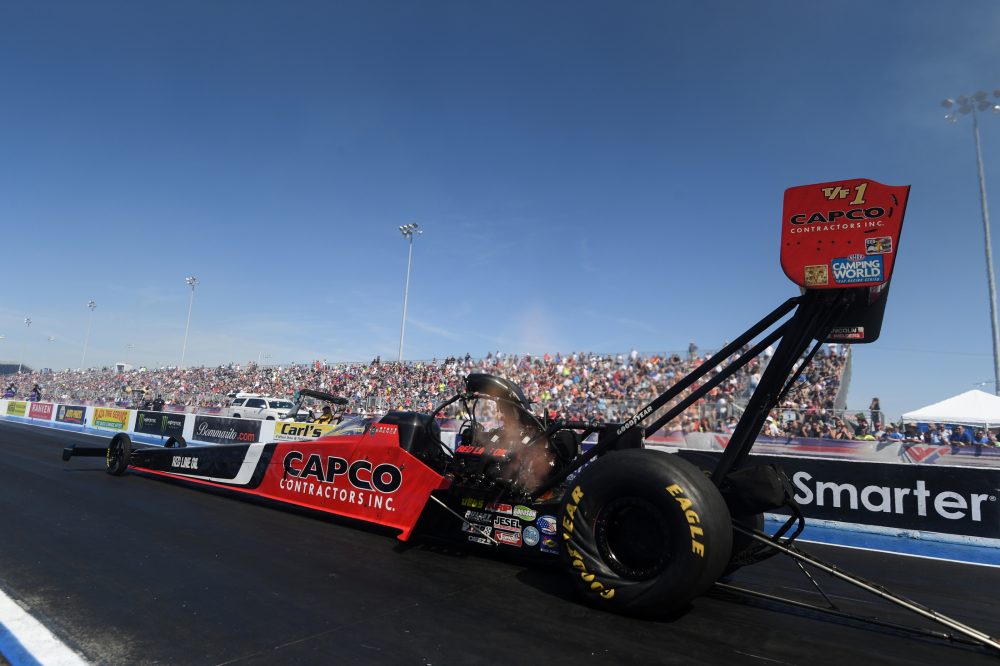 “You’ve got to be consistent on raceday and go out and do your job,” Torrence said. “Some days you’re better to be lucky than good and that’s where we were at today. We’re pretty confident in our car and our ability to do our jobs. You’ve got to win races on raceday. The continuity of this team, the way we work together, it just makes you better.”

Salinas, who was also the No. 1 qualifier, reached the final round for the second time this season and seventh in his career by defeating Kyle Wurtzel, Tripp Tatum and Leah Pruett. Torrence’s victory gave him a 36-point lead over Force with four races remaining in the 2021 season.

Hagan, the defending Funny Car world champ, capped off an incredible weekend by going 3.933 at 333.49 in the final round in his 11,000-horsepower New Holland Dodge Charger SRT Hellcat Redeye to knock off Bob Tasca III, who went 3.967 at 329.99. It sent Hagan into the points lead, making the eighth straight race where the Funny Car points lead changed hands. It may be tough to take the lead from Hagan based on how he ran this weekend, as he qualified No. 1 and then drove past J.R. Todd and Cruz Pedregon to reach the final round. He led start-to-finish against Tasca to pick up his third win this season and 39th in his career. It was also a meaningful win for Hagan, who missed two races with COVID-19 before returning last weekend. 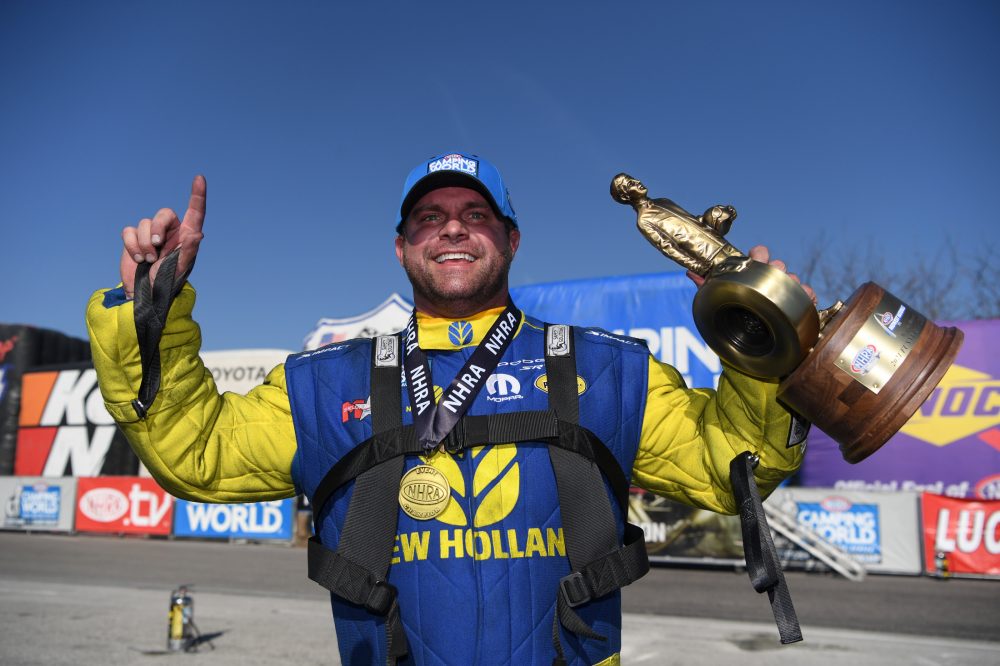 “(Crew chief) Dickie Venables just threw down all weekend,” Hagan said. “You give him a little time and he just dials it in. I’m so blessed and lucky to have him in my corner and I’m just trying to do my job. When we have a combination and a package like that, it’s really hard to beat. We take it in stride because these things are the most humbling things I’ve been around. For me, it’s about keeping it in perspective and trying to focus on what I can control. I know our car can be a serious contender and I think we’ve a chance to win it, but it’s just a slugfest out there.”

Tasca picked up his fourth final round appearance this season and 20th in his career after defeating Alexis DeJoria, Bobby Bode and John Force. Hagan now leads Ron Capps by 59 points and Force by 72.

Enders, the reigning and back-to-back Pro Stock world champ, rose to the occasion once again in St. Louis, slipping past rookie Dallas Glenn in a thriller of a final round with a run of 6.572 at 207.24 in her Melling Performance/Elite Motorsports Chevrolet Camaro. Enders also had a stellar .010 reaction time, which proved to be just enough to defeat Glenn, who was a near-perfect .001 on the starting line and ran 6.583 at 208.85. It gave Enders the victory by just .002, closing the gap to just 17 points between her and points leader Greg Anderson, with both drivers seeking their fifth world title.

Enders knocked off Bo Butner, Aaron Stanfield and Mason McGaha to reach the final, where she pulled off her fourth win this season, 33rd in her career and also her third straight at World Wide Technology Raceway. 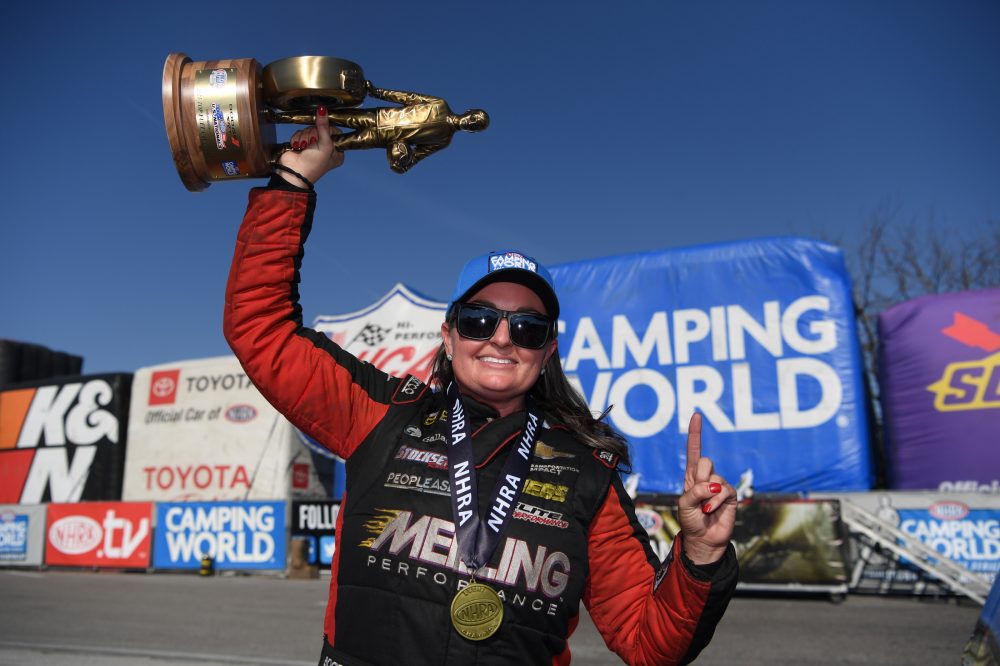 “It was an awesome day and St. Louis has just been really good to us,” said Enders, who has five career St. Louis wins. “It’s always been great to me and we’ve won here quite a bit. I’m grateful to come here and we’ve put ourselves back in striking distance of Greg, and we’ve just got to go to work. We rose to the occasion today as a group and I’m proud of it. It’s going to take a lot of work to compete for this fifth championship, but I think I’ve got the best guys in the world to do that.”

Glenn advanced to his fourth final round in his impressive rookie season, driving past Cristian Cuadra, Rodger Brogdon and Chris McGaha. Kyle Koretsky remained third in points and is 97 points back of Anderson.